A Day of Trouble Rebuke and Blasphemy 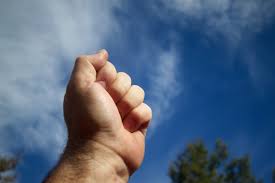 In ancient times, there was a godly king who ruled in Judah. His name was Hezekiah. The Bible says he trusted in God to such a degree that there were no kings in Judah like him before or after his reign. “For he clave to the Lord, and departed not from following him, but kept his commandments, which the Lord commanded Moses. And the Lord was with him; and he prospered withersoever he went forth: and he rebelled against the king of Assyria, and served him not.” 1 Kings 18:6-7

Assyria had been taking people captive and conquering cities left and right. Hezekiah rebelled against this strong king. His rebellion didn’t go unnoticed. The king of Assyria sent a guy named Rabshakeh with a large army to come against Jerusalem. Rabshakeh spoke with a loud voice in the Jews’ language so that all of the city residents could hear his message loud and clear.

“What confidence is this wherein thou trusteth?” 2 Kings 18:19b

“Now on whom dost thou trust, that thou rebellest against me?” 2 Kings 18:20b

“Then Rabshakeh stood and cried with a loud voice in the Jews’ language, and spake, saying, Hear the word of the great king, the king of Assyria: Let not Hezekiah deceive you: for he shall not be able to deliver you out of his hand: Neither let Hezekiah make you trust in the Lord, saying, The Lord will surely deliver us, and this city shall not be delivered into the hand of the king of Assyria.” 2 Kings 18:28-30

This guy didn’t just come and besiege the city, but he actually tried to persuade the residents to go against their king. He also mocked and blasphemed the Lord. His voice was loud and persuasive. Hezekiah’s response was to go into the house of the Lord and to send to the prophet Isaiah for advice. Hezekiah’s message to Isaiah was, “This day is a day of trouble, and of rebuke, and blasphemy: for the children are come to the birth, and there is not strength to bring forth.” 2 Kings 19:3b Hezekiah was troubled and concerned about what was happening. He also sent word to Isaiah, “It may be the Lord thy God will hear all the words of Rabshekah, whom the king of Assyria his master hath sent to reproach the living God; and will reprove the words which the Lord thy God hath heard: wherefore lift up thy prayer for the remnant that are left.” 2 Kings 19:4

Hezekiah recognized Rabshakeh’s words as being very serious against God Himself. It’s a serious thing to mock God. It’s a serious thing to try to persuade an entire people group not to put their trust in Him. He basically says that God may deal with this arrogant loudmouth because of what he’s said against the Lord. I love the prophet Isaiah’s response to Hezekiah’s message. Isaiah says, “Thus saith the Lord, Be not afraid of the words which thou hast heard, with which the servants of the king of Assyria have blasphemed me.” 2 Kings 19:6b I love Isaiah’s confident response of “Thus saith the Lord”. It’s for sure. God is going to deal with this guy.

Rabshakeh went back to Assyria but then he sends a letter to Hezekiah. “Let not thy God in whom thou trusteth deceive thee, saying Jerusalem shall not be delivered into the hand of the king of Assyria. Behold, thou hast heard what the kings of Assyria have done to all lands, by destroying them utterly: and shall you be delivered?” When Hezekiah received this letter, he went into the house of the Lord and spread the letter before the Lord. He proceeded to pray and ask God to see and hear the words that were reproaching God Himself. Hezekiah tells God that it’s true that Sennacherib, king of Assyria, has defeated all these other lands and other gods. Hezekiah then asks that God would deliver them so that all the lands would know that He really is the one and only true God.

“Therefore, thus saith the Lord concerning the king of Assyria, He shall not come into this city, nor shoot an arrow there, nor come before it with shield, nor cast a bank against it.” 2 Kings 19:32

That night, the angel of the Lord came into the camp of the Assyrians and killed 185,000 Assyrians. When the remaining men woke up the next day, they found 185,000 corpses. That was enough to send them packing back to Assyria. When Sennacherib, king of Assyria, got back home, two of his sons killed him with the sword and another son took over reigning in his stead.

God is well able to deal with His enemies and ours. He let this situation play out but in one night’s time, he dealt with these evil men and brought the life and death circumstances to a close. If we’re hearing the loud voices who are elevating themselves above God, make no mistake that God is hearing them, as well. Don’t be afraid. Let’s come before God in prayer and ask Him to deal with the loudmouths we’re facing today. It may be that He will hear our prayer and reprove the words which He has heard.

“What shall we then say to these things? If God is for us, who can be against us?” Romans 8:31

See more from Laura and her Sidewalk Scribbles at laurahoffses.com.