A Man, a Widow and a Painter 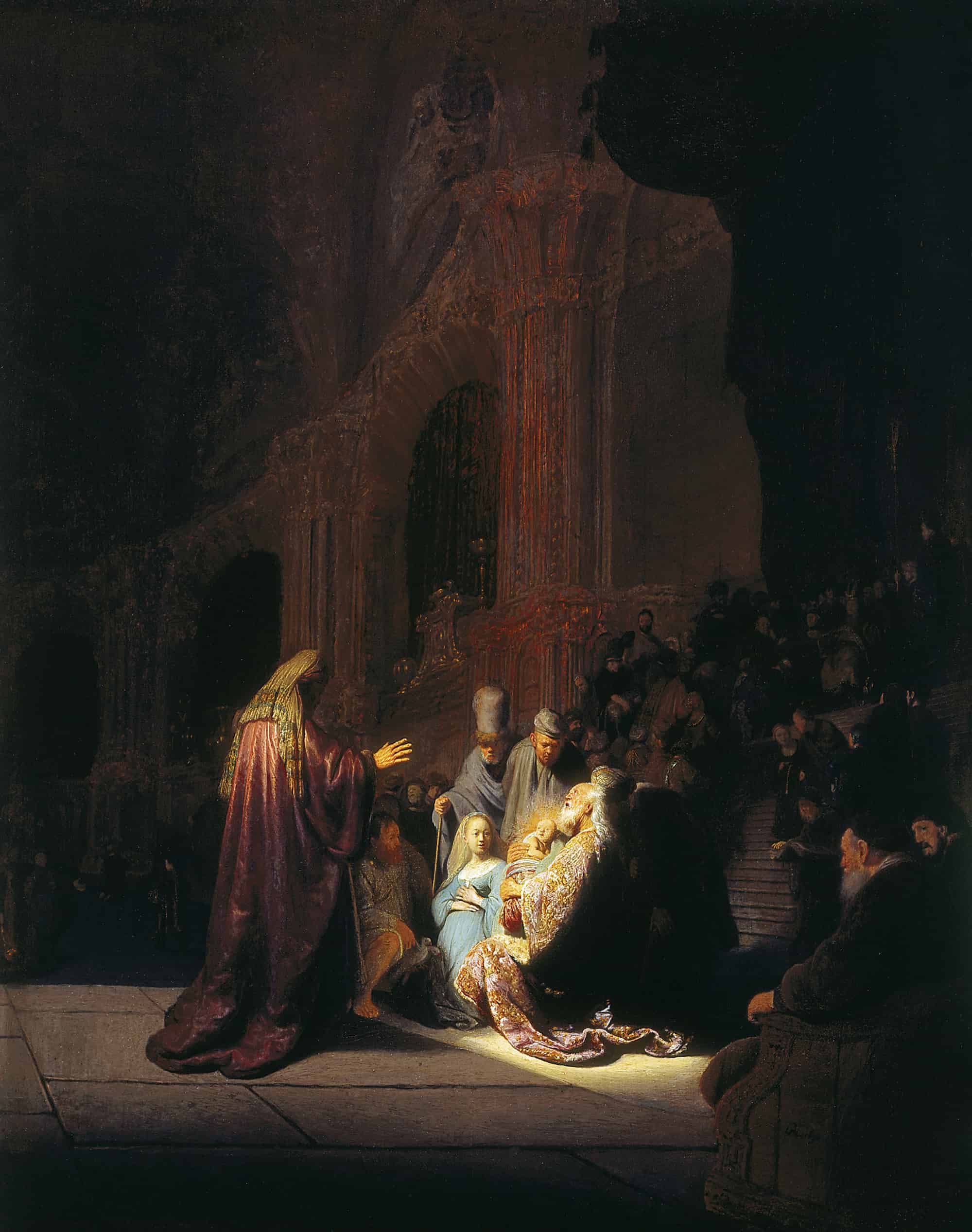 It happened just as the prophet said it would. One ordinary day in Jerusalem, the most extraordinary Person ever born appeared. He did not stride in triumph. There were no trumpets announcing His presence. It was a still, small arrival for the Son of God. He came as an infant swaddled. He wore no crown. He came in the arms of His young newlywed mother, Mary of Nazareth.

Jesus was just a few weeks old at this point. He’d been named and circumcised. Joseph and Mary brought Him to the Temple to present Him to the Lord and offer the sacrifice prescribed by the Law of Moses.

And at least a couple people were waiting for Him, ready to embrace the One sent from Heaven. From an account in Luke 2, we know them as Simeon, a man of determined faith, and Anna, a widow devoted to prayer and fasting.

It was a dark, confused time in Jerusalem. Simeon, however, refused to abandon his hope in God. The Holy Spirit had given Simeon a promise. He was told that the day would come when he would see the Christ, the Messiah, the Anointed One of God, the salvation of Israel and the world.

The Weight of the Wait

I am sure Simeon had good days and not-so-good days related to the hope of the Savior’s coming. There were mornings when he leapt from his bed. On those days, he would bounce from his house to the Temple with an expectation alive and free, the joy of the Lord as his strength.

Other days had to be different. He awoke sometimes in heaviness, feeling forgotten and forsaken, brokenhearted for his nation and its people. There was weight in the waiting. The walk to the Temple was slow, labored, strained at times. There were no doubt some sighs and groans, laments and complaints, and perhaps a grumble here and there.

Like the psalmist and the prophet, Simeon would cry in his heart and with his mouth, “How long, Lord? How long?”

God is with us in such times. He knows. He sees. He hears. He cares. Think about this: the Holy Spirit can feel quenched; the Spirit also groans, and the Spirit grieves, too.

The Spirit was with Simeon at this great moment. He entered the Temple and there was Jesus. He knew at once that the promise made to him had been fulfilled. He took Jesus into his arms and began to sing. He spoke of what had dawned with the coming of the Christ:

“Lord, now You are letting Your servant depart in peace, according to Your word. For my eyes have seen Your salvation, which You have prepared before the face of all peoples, a light to bring revelation to the Gentiles, and the glory of Your people Israel” (Luke 2:29-32).

The Salvation brought in the Person of Christ was a salvation for all people; its light would shine even to the Gentiles. Click To Tweet

The Salvation brought in the Person of Christ was a salvation for all people; its light would shine even to the Gentiles. In the midst of the Temple, Israel’s most holy and sacred space, this man of God told of the real mission of the Messiah. Jesus was Israel’s glory, but this glory was to shine upon everyone in every place. The Savior came not to restore empire status to a nation; He came instead to bring redemption to the lost and dying world.

Simeon blessed Mary and told her of things to come. Her life as the mother of Christ would be no happily-ever-after fairytale. Jesus would be spoken against, as He challenged and exposed the thoughts of many hearts. These things would pierce her very soul, Simeon said.

At Home in the Temple

Anna happened upon the scene. She was a woman always in the Temple; she made the house of God her home after the death of her husband just seven years into their marriage. Now in her 90s, she continued to watch and pray, fast and serve.

Luke, the writer of the gospel, pointed out Anna’s lineage to the tribe of Asher, who was the eighth son of Jacob, born to Zilpah, the maid to wife Leah. Those of Asher are defined as people of character with royal connections through the Scriptures.

Jacob pronounced that Asher’s descendants would be rich ones who would yield “royal delicacies” (Genesis 49:20). Moses declared this tribe would be blessed with children, an acceptable group that “dip its feet in oil” (Deuteronomy 33:24) – an anointed people, in other words.

The books of the Chronicles define the Asherites as “approved, mighty warriors, chiefs of the princes” (1 Chronicles 7:40) who joined King David’s ranks as “seasoned troops ready for battle” (1 Chronicles 12:36). When King Hezekiah attempted to draw the tribes of Israel together in calling for a Passover celebration at Jerusalem, the majority laughed and mocked the invitation. However, some from Asher “humbled themselves and came” (2 Chronicles 30:11). Perhaps, Anna came from one of these families.

In the Temple, Anna joined in the celebration with Simeon. At once, she entered into thanksgiving and began speaking of Jesus to all who were waiting for “the redemption.”

Picture it with me: two faithful old saints had to be giddy as teenagers at the presence of God. Jesus was here. The Messiah had come. God was with them. This Immanuel, they knew and believed, would ransom the captives.

Centuries later, one would picture this for us – with clarity and focus.

An Artist and the Truth

Artist Rembrandt took Luke’s description and put it into colors on a panel of wood. At the age of 25, the Dutch master painted what he titled “Simeon in the Temple” in 1631.

The painting captured so realistically the atmosphere of this place at that moment. The edges of this work show the Temple full of shadow and business. There was a lot going on there. Just a few were engaged with Jesus, Mary, and Joseph.

The masterpiece’s composition moves our eyes to the faces encircled about the Son. They are aglow, radiant as they look toward heaven.

I once saw this painting at the Maurithaus, a museum in The Hague, the Netherlands. I stood before it for several minutes and remember feeling the sense of Simeon’s joy, but also the indifference of those on the periphery.

Yes, Jesus, the Lord, appeared suddenly in the Temple and only a few noticed. Rembrandt, I believe, stands as one who noticed.

Rembrandt, whose artworks are universally recognized as among the finest ever produced, lived a life filled with ups and downs. He had his troubles with women and with debt. Three of his children perished as infants.

But this image of the Savior’s coming to the Temple stayed with the painter.

Upon Rembrandt’s death in 1669, his studio was opened and in it was found an unfinished portrait. Its working title was this: “Simeon’s Song of Praise.” The face of Simeon rules the  work.  He is in song, holding fast to Christ.

There’s something more going on in this painting, however.

The features of Simeon behind his snowy beard resemble the face of the painter in a self portrait he did around the same time. It seems Rembrandt portrayed himself holding Christ.

I imagine Rembrandt, like Simeon and Anna, awaiting the Son, eager for redemption. As he waited, he painted. And then suddenly came the presence of the Lord, and in fullness of joy there was Rembrandt, Simeon, and Anna together with the Son.

Now, it is we who wait for His appearing. Days pass. Some are joyful and triumphant; others are sad, long, lonely. Let’s hold fast to the promise. Believing, may we worship and serve, sing and fast, work and paint even — if God has so gifted us.