A Rest for Jugglers Everywhere 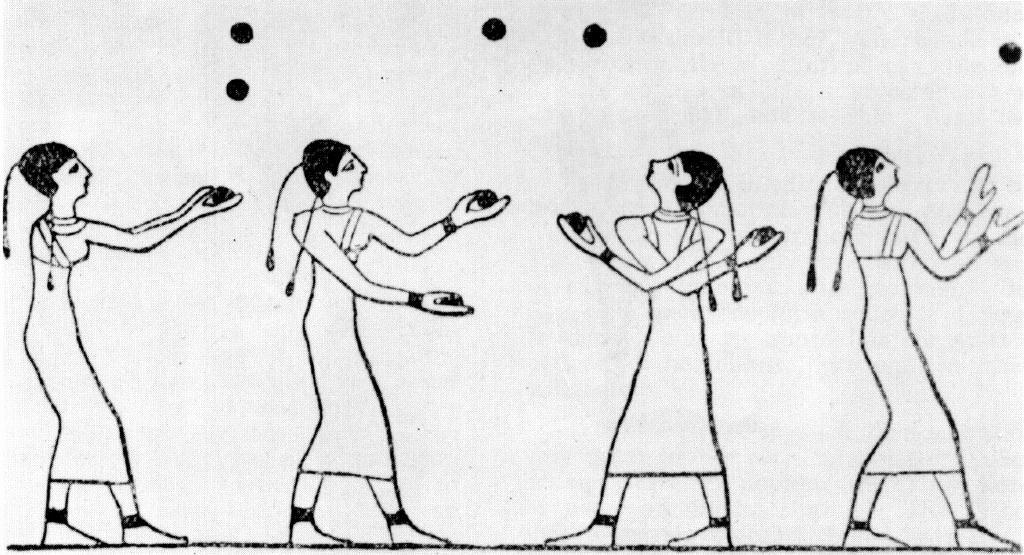 I see people of unbelief as jugglers in a circus of life. And, a sad circus it is.

These “performers” toss things from hand to hand in an attempt to stay busy, or focused, or fit. One moment of distraction and something falls to the floor. A ball drops and the cycle’s broken, the activity stalled.  As a casual observer of a few jugglers – including my son – the technique seems to be all about timing and momentum. Once things are in motion, concentration and stamina become the issues.

What’s the world record for juggling anyway? This train of thought led me to search out the answer to that very question. The Guiness Book of World Records lists a Texan named Slick as the record holder for juggling three balls. He kept them aloft for 12 hours and 5 minutes.

Well, that’s one way to spend more than half a day.

People of unbelief juggle thoughts and concepts. They toss them around their minds for days, weeks, months, and years even. Rarely, however, do they enjoy peace and rest. They must stay busy, busy, busy in order to maintain some degree of purpose.

Psalm 2 speaks about this phenomenon and its necessity in natural human culture. This psalm opens with this statement: “Why do the heathen rage and people imagine a vain thing?”

Rage — it’s there in all of us. It simmers beneath the surface of our lives. We see injustice and we want to holler or hammer, to shout or shoot. We want someone, anyone, to make things right. Justice has to be served somehow, even if there is some collateral damage associated with it.

There is something in all of us that recognizes the crooked, the crumpled, the buckled, the bulging, the wrinkled, and the wrecked. This something has a name – conscience. Conscience measures and weighs things in the abstract in a way similar to how scales and rulers do with the concrete elements of our existence. “…[W]hat the Law requires is written in their hearts, a fact to which their own consciences testify, and their thoughts will either accuse or excuse them” (Romans 2:15).

Conscience has a voice and it speaks – inaudibly – to our hearts and minds. It fingers disorder for us, points out stuff that’s just not right. Conscience is not so demanding, however. It can be ignored. And, if ignored, we do so at our peril. It manifested itself in the Garden, when Adam and Eve partook of the Tree of the Knowledge of Good and Evil.

Activated and agitated, their consciences stirred recognition of their nakedness and prompted their recoiling at the sound of the presence of God. I believe the first man and woman suffered a bout of information overload. The forbidden tree was labeled the Tree of the Knowledge of Good and Evil. God had taught them and given them all that they needed to know and eating made them know too much.

Satan showed them that there was so much more for them. They bought the lie and so began the labor of juggling. I say labor for this is neither game nor sport. It is serious and sorrowful to the maximum. The balls in the air seem so light, but the activity of keeping them there grows more and more burdensome.

These are presented as answers for the pricks of conscience that jab at our thoughts and feelings. Push never comes to shove where conscience is involved. And, ignorance of it can become habit forming.

At its most functional, the conscience stays tender and sensitive. ... a ready tool for discernment. Click To Tweet

Prolonged ignorance of conscience, however, creates callousness. Thick, hard, scarred skin forms a barrier, a form of sound-proofing really. A profound lack of feeling can develop. The whisperings of conscience become harder and harder to hear.

I played a lot of guitar in my teens and early 20s. The practices and performances made my fingertips tough and firm. Every now and then, I would try to impress someone – a girl usually – by snuffing out a lit match or candle with my fingertips. There was no hurt there; I couldn’t even feel the heat. The trick got a few laughs and groans, but did little to get me any more dates. Some even found it gross that I would do such a thing to myself.

The Bible refers to those whose consciences have been seared – fried to the point of unfeeling, sort of like my guitar-playing fingertips. A seared conscience is the result of too many vain things being layered to muffle rage.

Rage is emotion boiled over; it is the overreaction of hearts chained to sick and silenced consciences. It’s a cry for change, a plea for mischief to be framed (see Psalm 94:20).

Fresh rage requires fresh vanities. The process of witty invention produces ever more diverse ways that serve to take the edge off of dissatisfaction and disappointment and disaffection.

Take a trip down a video game aisle. Talk about your witty inventions. Look at the variety of genres. There’s something there for anyone who needs to fritter away a few hours of his life.

The Problem with New Faith

What’s the real issue? Again, it is unbelief. Nothing is seen to be true. It’s the attitude exhibited by Pontius Pilate as he interviewed Jesus. “What is truth?” scoffed the Roman leader of Jerusalem.

Much has been said and written about “the end of faith” and it’s just not true and never will be. People trust; they must. The highway tells us so. We rev up our engines and pull out into the thoroughfares by faith; that is, we trust that those in the other vehicles on our roads operate under the same premises that we hold to be right. Red means stop, green means go, and those who violate these standards shall be punished for their lawlessness.

What sociologists and philosophers and thinkers present to the world today really is not no faith, rather it is new faith. It is a belief system that shuts the door on consciences formed from creeds and religious cultures. In this belief system, a worldview based upon the Bible is seen as archaic and an obstruction to humanity’s path to a future of diversity and community, acceptance and safety.

New faith requires that we accept that this world as we know it is all there is, and that it is up to us to preserve it and protect it and form a just society to exist in it. The problem is that natural human hearts are, ahem, prone to self-advancement and self-preservation and, therefore, desperate and wicked. As British writer Francis Spufford put it, there’s a definite “human propensity to [mess] things up.” (Mr. Spufford used a somewhat stronger term than “mess.”)

New faith lacks one key ingredient – a place of real rest. Since no absolute realities exist in new faith, there’s nothing rock solid enough to sit upon.

Result: The juggling just goes on and on. Grab the next vain thing that presents itself and toss it into your rhythm and motion. Keep going until the collapse comes, because it is coming.

Rest: Cover for the Weary

The pace and intensity of such activity is weighty. Heaviness is a spirit and the only answer for it, according to the prophet Isaiah, is the garment of praise.

Christ came to provide this cover for those seek Him; He offers rest to those weary from juggling. He said so in Luke 4 as He read from Isaiah 61.

Verse 3 of Isaiah 61 tells us that He came to heal those who mourn and to give “beauty for ashes, the oil of joy for mourning, the garment of praise for the spirit of heaviness; that they might be called trees of righteousness, the planting of the LORD, that he might be glorified.”

Rest comes to us not in a program or process or possession. It comes to us in the Person of God, in the Son and His finished work of redemption. His accomplishment on the Cross opened the way for us to come boldly into the presence of the Holy One in our times of need.  By the offering of the Lamb of God, each human being can be what he or she was designed to be – a vessel for His glory, a habitation of the Holy Spirit who is given without measure to those who believe.

Are you ready to let the balls drop and juggle no more? Come; find your rest in Him.

Just reach for this thread of true belief. Come to Christ and let the Lord give you the robe of His righteousness. It’s a garment that never grows threadbare or thin.

It covers all, now and forever.

For more about a faith that works by love, please listen to “Christmas, We Need it,” a message preached by Thomas Schaller, Pastor of Greater Grace Church in Baltimore.