An Angel, a Girl and an Answer of Faith 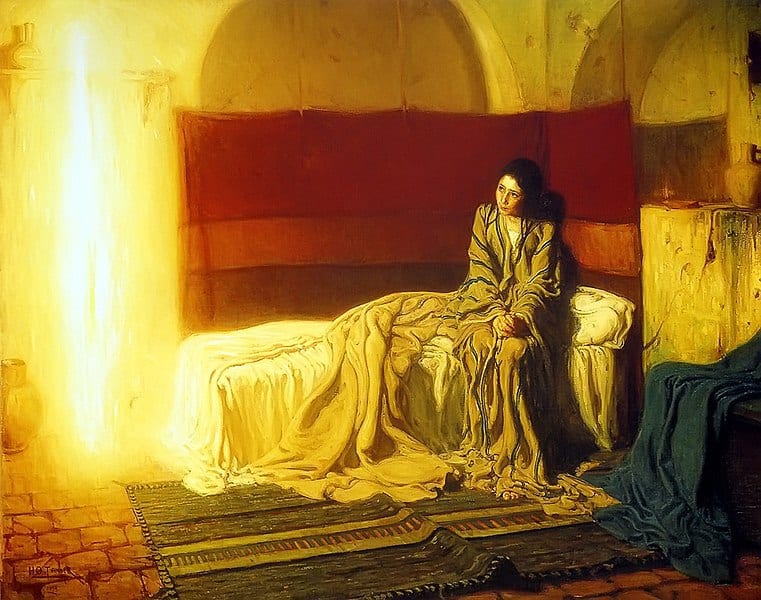 Gabriel brought news from Heaven. It was this angel’s latest assignment, but it was unlike any he had been sent to do before.

His destination:  Nazareth, a small highway town in the region of Galilee, north of Jerusalem and Judea. There, he would come to Mary, a virgin girl, a teenager now engaged. Her days at that time were likely filled with preparations for her wedding day and the home she would share with Joseph, a carpenter.

Gabriel greeted Mary with these words: “You are highly favored and blessed among women. The Lord is with you.”

These words and the presence of this bright being sent from God astounded the girl. She attempted to collect her thoughts. She struggled to make sense of Gabriel’s unusual hello.

Before she could answer Gabriel, he spoke even more stunning sentences to her.

“Fear not,” he said to assure her and then declared to her the mission for which she was chosen:   “… Behold, you will conceive in your womb and bear a son, and you shall call his name Jesus.  He will be great and will be called the Son of the Most High. And the Lord God will give to him the throne of his father David, and he will reign over the house of Jacob forever, and of his kingdom there will be no end” (Luke 1:30-33).

Oh, what words from angels have been heard by ears on earth!

It isn’t hard to imagine what Mary’s reactions might have been to the things said to her. “Fear not? Really? Me? A virgin give birth? To the Son of David? How can this be?” had to be among them.

An Angel Waits for the Answer

I wonder how Gabriel saw it all. Did this radiant and transcendent being smile at the amazed and puzzled expressions that passed over the very human face of Mary?

Visitations like this could leave one speechless. It had happened to one of Mary’s own relatives.

Just a few weeks earlier, Gabriel met Zacharias in the Jerusalem Temple, at the altar of incense. The angel came to say that the prayers of this man and his wife would be answered. Despite their aged conditions, they would soon have a son, Gabriel told him.

Upon hearing this, Zacharias could not help his unbelief. Doubt poured forth from him – so much so that he had to be silenced for a season. But soon Elizabeth, his wife, was very much pregnant – and she and her voiceless husband became the talk of many in the hills of Judea.

She was being invited into the plan of world redemption. She had been asked to serve as the mother of the Lamb of God. Click To Tweet

Would Mary express similar doubts? What had been told her involved the highest and deepest of God’s purposes. She was being invited into the plan of world redemption. She had been asked to serve as the mother of the Lamb of God.

Could Mary receive this?

This very messenger had been to earth before. Every visitation was holy and unique. He always carried words from the throne of the Lord. They were messages of hope and mission and love. Not all of Gabriel’s assignments had been smooth rides. Once, en route to speak to Daniel the prophet, this angel ran smack into the powers of Satan, the prince and the power of the air. The demon forces and the atmosphere filling Babylon and Persia in those days held Gabriel back for three weeks. At last, Michael, an archangel, came to break through.

It seems Michael’s help wasn’t welcome in this case. The reservations that swirled in Mary’s mind and heart were matters of a different sort. Human will remains a strong force, an institution decreed by the Lord, and something often driven to distraction, confusion, and fear.

Mary had a choice – the Scriptures leave no doubt about this.

“The Holy Spirit, the power of the Most High shall overshadow you … For nothing will be impossible with God,” Gabriel said.

It was just what this girl needed to hear. “Behold, I am the servant of the Lord; let it be to me according to your word,” she said.

“Let it be to me.” I think her response sounded like music to Gabriel.

He and the others among the host of God’s armies had seen the other side. They’ve watched and heard stiff-necked and stubborn people refuse the call of the Lord. They surely sorrowed along with the Lord in His heartbreak over the idolatry and disobedience and grievous sin committed by His chosen ones. And of course, there was and is the constant parade of accusations leveled by the devil against the prizes of creation who were made in God’s image.

All of this makes me think that being an angel is not as easy as we assume it to be. We have to admit this fact:  serving human beings requires vigilance and patience. Angels have to trust that the Lord knows what He is doing with us and believe in what He is doing with them, in what they are sent to do for us.

“Let it be to me according to your word.” Mary said just what Gabriel had hoped to hear. She gave herself to the mission.

A girl was needed. A girl was chosen. A girl responded in faith.

The Son could now be given; the Child would be born; the Redeemer’s way into the human race was set forth.

At once, Gabriel departed. He went, I believe, to Heaven to rejoice before the throne of God. I am convinced that there was a celebration that day over the perfect, sovereign plan of God. It is a plan eternal in its reality, but thousands and thousands of years in its unfolding over time.

Mary, with Child, and Joseph would be in Bethlehem within months. Christ the Savior would be born.

And, angels would be heard on high, sweetly singing o’er the plain.

For more on Mary and her part in the Christmas story, check out “The Little We Know is Enough,” a message from Thomas Schaller, Pastor of Greater Grace Church in Baltimore.