Angels We Have Heard 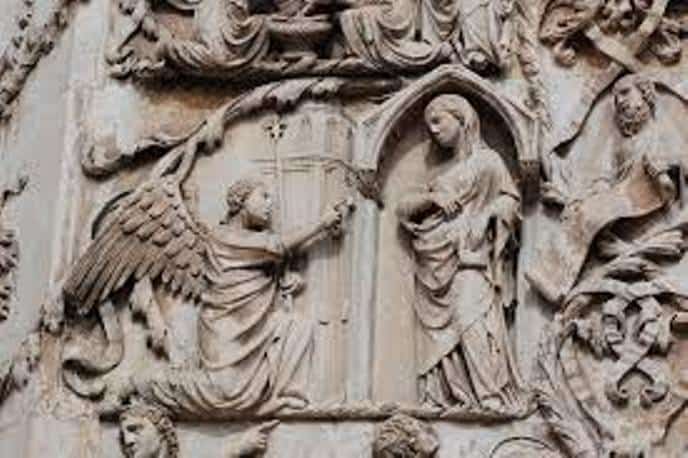 She was a woman on the run. Feeling unwelcome and mistreated as a maid in the home of Abraham and Sarah, Hagar made her escape. She was pregnant and all alone as she sat by a stream in the wilderness of Canaan. At least, she had found a place of water in that dry region.

There, she was met by the angel of the Lord. Surprisingly, this account in Genesis 16 represents the first instance of angel talk recorded in our Bibles. “Hagar, servant of Sarah, where have you come from and where are you going?” the angel said. This account points me to Genesis 3, where we read of how God sought Adam as he and Eve hid among the trees — “Where are you?” were the words spoken in the Garden.

How did Hagar get to this place? It’s a complicated story.

Sarah, childless with a “dead” womb due to age, hatched a plot to use Hagar as a surrogate mother of sorts. Abraham agreed to go along with his wife’s scheme, took Hagar as a secondary wife. The maid quickly conceived.  She celebrated the pregnancy perhaps too much and expressed a sense of superiority over her barren mistress. This irritated Sarah, and so she made life hard for Hagar.

Hagar ran away from home. This woman, however, was not unnoticed. The angel came and told Hagar that she would have a son. She was to call him Ishmael, or “God shall hear. ” This was because the angel made it clear to her that “the Lord has listened to your affliction” (see Genesis 16:11).

This is what angels are for. They are sent to help and tell us that God hears all that is going on in our lives.

This is what angels are for. They are sent to help and tell us that God hears all that is going on in our lives. Click To Tweet

It fascinates me that this woman, this mother of Ishmael, is the first one to hear from an angel. I think we tend to think of angelic visitations as rewards from Heaven. They are not that at all, however. Angels show up with Good News in perilous and troublesome times, as they did with the shepherds in the fields outside Bethlehem so long ago.

We hear much from angels in the Christmas story found in Luke 1 and 2. These chapters describe how the angel Gabriel came and spoke to Zacharias, priest and husband of the childless and barren Elizabeth, and to Mary, the virgin girl betrothed to the carpenter Joseph. He came with promises of the miracle births of two great sons: John the Baptist to Zacharias and Elizabeth; Jesus the Christ, our Lord and Savior, to Mary.

Gabriel – a name that means mighty one of God – showed up on earth a few centuries earlier. At that time, this angel came with messages of prophecy and hope for Daniel who was a Hebrew of discernment and served the king of heathen in Babylon.

In Daniel 9, Gabriel arrived just after Daniel had finished a prayer of confession for himself and for his people, Israel. Note the greeting the man received: “At the beginning of your pleas for mercy a word went out, and I have come to tell it to you, for I am come to show you that you are greatly beloved” (see Daniel 9:23). The angel would indeed help Daniel’s understanding of his visions, but first he had to speak the word of love sent from the throne of God.

Daniel got the very same greeting from the angel in the next chapter – “O Daniel, man greatly loved, understand the words that I speak to you” (Daniel 10:10). This passage from the Scriptures continues with an insight into the unseen conflict that rages among us. The angel was delayed for three weeks. He was “withstood” while on his way, by the demonic prince of Persia until another angel, Michael, came to help in the battle.  This account serves to expose the enemy and his legions; for there are, in fact, angelic creatures who abandoned their assignments as servants. They instead chose to oppose the Lord their Maker, and they now war to thwart His purposes upon earth. Much could be said of these “demons,” but space does not permit it. Here and now, let it be declared that the Word reveals these enemies as limited and doomed to defeat because of the Finished Work of Jesus Christ.

The book of Revelation, at the close of our Bibles, pulls back the curtain even more for us on the world of angels and their purposes. Angels guided John the Apostle through a series of visions when he lived in exile among political prisoners on the small island of Patmos. The scenes shown to John outlined the future of the heavens and the earth and those who occupy them. Throughout the chapters, we read of angels in roles of worship and exaltation, judgment and witness.

Toward the end of these revelations, John dropped on his face before an angel to worship him. The Apostle got this sharp rebuke: “You must not do that! I am a fellow servant with you and with your brothers who hold the testimony of Jesus. Worship God” (see Revelation 19:10).

None created are worthy of worship. Angels were made by God to serve Him and to serve believers in Christ Jesus. Yes, they are glorious, powerful, wise, and wonderful. They are guardians and warriors. And, yet, they exist for us as our ministers. According Hebrews 1:14, all angels are “ministering spirits sent out to serve for the sake of those who are to inherit salvation.”

Angels have been heard and will be heard again. They are still at work in our midst. They watch us and watch over us, according to their true and wonderful design. Let’s take comfort in their reality as we know it from the Bible.

Also, let us sing with them the songs of praise to the Lord:

Glory to God in the Highest.

And peace to His people on earth.

For more about angels and their work among us, check out “One Important Angel and Three Births,” a message preached by Thomas Schaller, Pastor of Greater Grace Church of Baltimore.