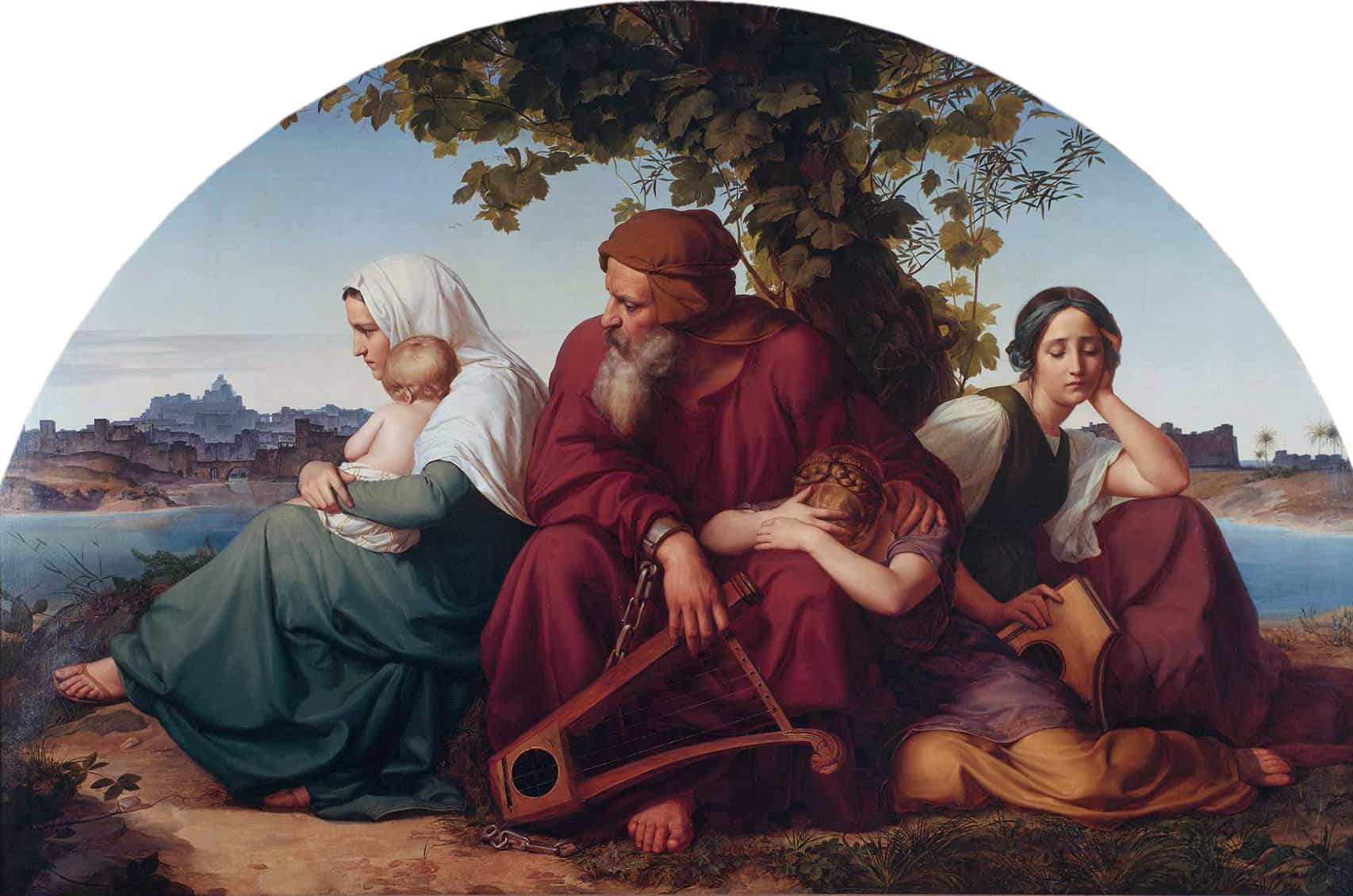 Jeremiah faced a nation pretty much all by himself. He spoke for God; but few listened and heeded the words given to him to tell. He addressed kings and priests, noblemen and soldiers. His words were strong, warning of the consequences to come from the people’s years of idolatry and ignorance of the Lord and His commands. Truth hit closed ears and hardened hearts and so it fell in the street. As a result, large numbers of Judah’s citizens were taken captive, forcibly relocated away from their Promised Land.

From Jerusalem to Babylon, they went. Members of the Lord’s chosen nation, the descendants of Abraham, Isaac, and Jacob, were placed under heathen authority. They had taken a fancy to pagan idols with their practices and were given over to a pagan government.

They were strangers again, just as they had been in Egypt. They became the object of taunts — Psalm 137 describes how the captors mocked and bid them to sing the “songs of Zion.” The living conditions and bitter memories did prompt a measure of religious response as new fast days were instituted. Perhaps, they assumed, God would see how sorry they were and bring deliverance as He had in the days of Moses.

The Voice of the Prophet

Jeremiah had another message, however. It was this:  “Build ye houses, and dwell in them; and plant gardens, and eat the fruit of them; Take ye wives, and beget sons and daughters; and take wives for your sons, and give your daughters to husbands, that they may bear sons and daughters; that ye may be increased there, and not diminished. And seek the peace of the city whither I have caused you to be carried away captives, and pray unto the Lord for it: for in the peace thereof shall ye have peace” (Jeremiah 29:5-7 KJV).

Build. Plant. Eat. Let there be weddings and births. Grow as a community of families.

These were Jeremiah’s words. They were exhortations to activity, to work, and to love among themselves and toward their neighbors. The captives were not to hunker down and become invisible. They were not to become agitators and rebels. Instead, they were to trust God to work things together for His good. Be at work and, as you work, be witnesses.

Some prophets had forecast a short stay for the captives in Babylon. These communications produced a false peace and a deceptive sense of security. The truth of the matter was that the people of Judah would be there for more than a generation. No storms of fiery hailstones or miraculous divisions of the seas were to come upon this city. Judgment would indeed fall upon Babylon, but not until God had used her in His providence.

Israel and its people had long lost sight of their original mission. Father Abraham was told that in his seed, all the nations of the earth would be blessed (Genesis 22:18).

This delivered people took up their place in the land to be a testimony for the Lord to ends of the earth. God spoke to them through Moses — they learned His Name and received the oracles from heaven. They were given commandments and ordinances.

At this point in time, the people of the Lord had become poor testimonies of Him. The beauty of His holiness was obscured. The God of Israel was known among the kingdoms of the region, and He was feared. The stories of His magnificence were taken seriously.

A man like Jeremiah and his message did get attention – in the Babylonian court of King Nebuchadnezzar. Once, Jerusalem was sacked and burned and its Temple destroyed, Nebuchadnezzar sent word to Jeremiah. The prophet was offered a place of safety and, likely, comfort in Babylon. All that Jeremiah proclaimed about the empire had come true. What leader wouldn’t covet such a man to be among his advisers? But the prophet refused the king and chose to stay among the remnant of poor farmers and laborers left among the ruins of Judah. There was work and ministry for him then and there.

And there was work and ministry for the Jews in Babylon.

Build. Plant. Eat. Make homes for yourselves. This was the essence of Jeremiah’s message to the people. In doing these basic and necessary things, these people would “seek the peace of the city.”

It’s really the message Jesus gave His disciples at the Passover before Good Friday. Calvary was coming in hours, and the Savior poured out His heart to His closest followers, to the ones chosen to witness His life, His death, and – soon to come – His resurrection.

Forgive and wash feet, the disciples were told. “Love one another as I have loved you,” Jesus told them.

Build – Grow in the precious faith of the Son of God.

Plant – Sow the seeds of the Gospel.

Eat – Break the bread and share the cup in communion, always remembering the Lamb who was slain.

Marry and give in marriage – Help families to flourish and form church communities that make a difference in neighborhoods, cities, states, and nations.

Our days on earth are few. Many of them are filled with struggle and anxiety, and for good reason – we aren’t really at home here and now. Yes, we make homes, but we don’t feel at home. We know that there’s another City — the New Jerusalem — that shall be set in place. We read and treasure the promise related to that time and place to come.

For now, let us listen to the prophet.

Let’s  build, plant, and eat. Let our homes be full of love and laughter and light. May they be places of comfort for the grieving and shelters for the weak, wounded, and weary.  In these ways, we seek the peace of our cities.