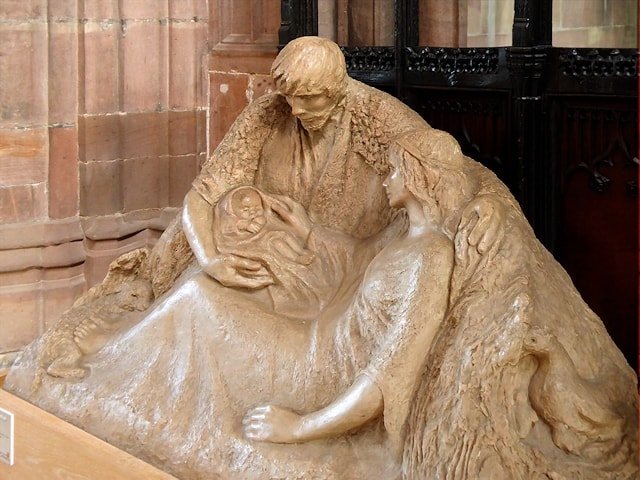 Joseph the carpenter wanted to do the right thing, the gentle thing, the merciful thing. His betrothed, his wife-to-be, was found to be with child. Her pregnancy, by appearances, came out of order. He had not yet taken her to be his wife, and he certainly had not known her physically. The circumstances put Joseph within his rights to terminate the marital arrangement.

He wrestled with the decision and sought the private legal course of separation – a simple document would be drawn up and delivered to Mary in the presence of two witnesses. A soft and warm heart beat within this man, one with hands calloused and scarred from working with hammer and chisel, wood and stone. To bring open shame upon Mary, to humiliate her before the town, Joseph could not do. Better to take the quiet way, he thought, and then move on with his life. The virgin, her womb now swollen, was found blessed and favored among women, would also find mercy among men.

This carpenter, perhaps because he had just such a heart, was made a dreamer by the Lord. God’s angel came and hailed him with these words: “Joseph, you son of David, fear not. …” (Matthew 1:20).

Think of the company of dreamers we read of in the Scriptures. Abraham, Jacob, Joseph, Solomon, and Daniel were all visited in their sleep. The Lord spoke of covenant and history and promise. Heaven often touched earth in this way when there was big news to share. Each of these men heard from heaven clearly and personally.

It was no different with Joseph.

The angel addressed this carpenter’s royal identity – “son of David,” he was a man in the line of the King of Israel.  David, who went from being a watcher of his father’s sheep in the fields to the palace and the throne, was the one anointed to rule as King over the tribes of the Lord’s people.

This simple Nazarene man was an anointed one as well. Joseph, chosen of the Lord, was called to open his life and home to the presence of the King of all kings and the Lord of lords. The One determined to sit at the right hand of the Father on high was to come and sit upon Joseph’s lap, to take a seat at a carpenter’s table.

“Fear not to take Mary as your wife, for that which is conceived in her is from the Holy Spirit. She will bear a son, and you shall call his name Jesus, for he will save his people from their sins.”

Centuries before this dream of Joseph’s, Isaiah declared that this moment would come.  A virgin would conceive and a son would be born to her. The prophet spoke these words to another son of David. Ahaz was his name, a king who shuttered the doors of the Temple and gave himself over the worship of idols.

Isaiah challenged Ahaz to seek a sign from God, ask anything of the Lord – big or small, high or low — the prophet said. He encouraged the king to let the Lord reveal His glory. Ahaz sniffed at Isaiah and belittled the man of God. He blew him off – “I’d never do that. I’d never make demands like that on God!” (see Isaiah 7). Don’t be fooled by the language here. Ahaz spoke from hypocrisy. He was giving no honor to God. Rather, he possessed a very low view of the Almighty, as evidenced by his reign. It was a wicked season marked by defeat; years that left Judah on the brink of disaster and enemy occupation.

Joseph, the son of David, responded in faith. He woke up and did what he was told to do. He took Mary as his wife, at once. The Lord’s visitation answered any doubts that might have lingered in him.

Within months, this carpenter would head south to Bethlehem, to the town of His family, to the place where David was raised as the son of Jesse. Mary would be with him and together they would register for the Roman census.

There would be troubles and more dreams for Joseph. No inn could take in these travelers, so Jesus was delivered in a manger, a place where farm animals were kept during the cold Judean nights. Herod, the ruler of the region, heard that Israel’s King had come. He eventually perceived this as a threat to his authority and ordered the slaughtering of every infant boy in his realm. Joseph got wind of the plot in a vision and spirited away the Son and His mother to Egypt under the cover of night.

The surprises and challenges kept coming, but Joseph had the heart to hear from God. And, he revealed a will to obey the Lord. Click To Tweet

The surprises and challenges kept coming, but Joseph had the heart to hear from God. And, he revealed a will to obey the Lord.

This carpenter, his wife, and the Son of God at last settled in Nazareth. It was in this place that Jesus spent His early years. He learned Joseph’s trade. Jesus carried wood and was taught how to swing a hammer.

There’s not much more to know about Joseph. Toward the end of Luke 2, we read that he led his family to Jerusalem every year for the Passover.  The story of how Jesus became lost and had to be found by His parents is told there. When finally found in the Temple, the 12-year-old Son was addressed this way by His mother: “Son, why have you treated us so? Behold, your father and I have been searching for you in great distress” (Luke 2:40).

Joseph cared for the Son. We cannot see this as a small thing. Jesus came to earth an infant and was committed to the keeping of this simple, hard-working man.

Other sons and daughters would be born to him and Mary, among them James and Jude, the writers of the New Testament books bearing their names.

I think we can view Joseph in relation to the gifts given to Jesus. The carpenter was gold in that he was of the royal ancestry of King David. He was frankincense; he was made, it seems, of tough, sticky stuff with a bit of salt. And he was myrrh – his life gave off a sweet fragrance that pointed to sacrifice.

In Joseph, we can see how gentleness makes way for greatness. A tender, obedient man filled a most remarkable place in the history of the world.

More about Joseph and his dreams can be found in “Mary’s Troubles, Joseph’s Dreams, God’s Leading,” a message preached by Thomas Schaller, Pastor of Greater Grace Church of Baltimore.