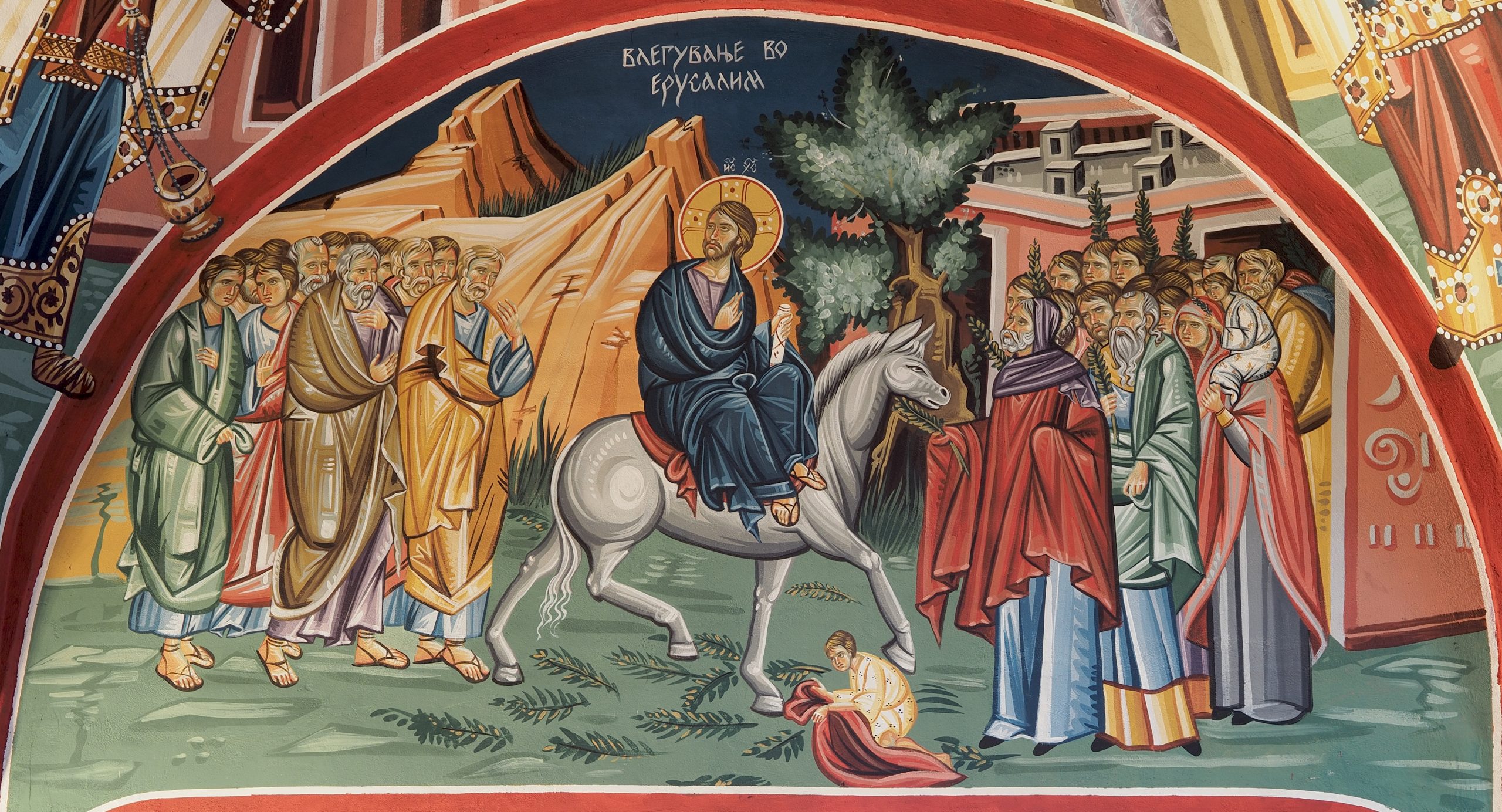 The fullness of the Presence of God came to Jerusalem. This Presence did not come as the people thought it would come. Their expectations centered on wealth, power, and muscle. Surely, trumpets would sound. The King would march in crowned, stately, and robed, ready for conquest.

Instead, the Presence came in the manner of a Person, God the Son. And this Person sat upon the foal of an ass, a young beast of burden. This Jesus was from Nazareth, a hardscrabble highway town in Galilee. His life had become known. His story, marked by miracle and mystery, caused much consternation among those who had it well in Judea. The leading figures in the community — the Pharisees, the Sadducees, the scribes, the lawyers, and the priests — obsessed over how to disrupt the movement that had coalesced around this Man. They had the good life and strived to keep the status quo.

Rather than trumpets, it was the squeals of children that greeted Jesus that Palm Sunday. “Hosanna to the Son of David,” they shouted. Where did these little ones learn such language? Could it be that God Himself filled their mouths with such praises? These joyous witnesses were a gift of tongues.

No limousine carried Jesus to a red carpet reception. The ass, an animal that had never been ridden before, strode slowly and deliberately as shirts and cloaks, scarves and handkerchiefs were tossed in the path. Others snipped and snapped branches and sticks from the trees, waving them and laying them down to create a series of crude welcome mats.

Within the Temple, there were scowls and mockery and anger. Jesus paid a visit to their merchandising center and left it a mess. He upended tables and sprung ceremonial animals from cages. Business interests were despoiled as the Son proclaimed that His Father’s house of prayer had been seized by thieves and robbers.

The Heart and His Presence

The Presence of God affects people for better or for worse. We react from the heart when the Lord moves in and makes Himself known. The response to His showing up really depends on our childlikeness.

Think of David and how he rejoiced at the coming of the Ark of the Covenant to his house in Jerusalem. He spun and leaped all around the courtyard. Dressed only in a linen ephod — something of long undershirt – he was a wonder to all and a grief to at least one. Some clapped and danced with this king. Others surely giggled and joked. Others were dumbfounded at the sight of Goliath’s slayer hopscotching to the music of the moment.

The Presence of God affects people for better or for worse. We react from the heart when the Lord moves in and makes Himself known. Click To Tweet

One, however, had something to say about this display. Michal, David’s wife and a daughter of Saul, the previous king, was peeved and let her husband know it. She was full of sarcasm and arrogance as she spoke: “How glorious was the king of Israel to day, who uncovered himself to day in the eyes of the handmaids of his servants, as one of the vain fellows shamelessly uncovereth himself!” (1 Samuel 6:20).

Sadly, on that day something really died in Michal – her womb. Never would she bear a child. Here’s a big question:  should a child be given to one who has stopped realizing what it was like to be a child?

David danced like a child at the coming of the Presence of God so close to him. It mattered not who approved or disapproved. He understood the love of the Lord. His was a heart after God and hearts after God sometimes break into remarkable and unreasonable joy.

And so we can say that it was the children of Jerusalem who were the wisest of all on the day Jesus came to town. They knew Him. They rejoiced at the sight of the King. It delighted them to see Him not on a high horse, but taking a low ride on a slow donkey.

Jesus was asked to shut down these young voices. Their glee struck a nerve in the rigidly reasonable religious leaders that day. “Jesus, how can you let them say such things about You?”

Why? Because these things are absolutely true, that’s why. Besides this, should their voices go silent the rocks and hills stand ready to open their mouths. Creation longs to break forth into singing.

Children, real children, tell the truth and unabashedly do so. In the tale of the Emperor’s New Clothes, it was the boy who exclaimed, “The king is naked.” The honesty shut down a royal parade and exposed a real charade.

That’s what the children of Jerusalem did. Their praise tore the robes and vestments off of the Temple atmosphere that day. Happy sounds ricocheted off the walls.

The King had come. The kids knew it and believed. No wonder Jesus welcomed babes and took them in His arms. They loved Him because they knew that He loved them.

It’s the key to everything, is it not?