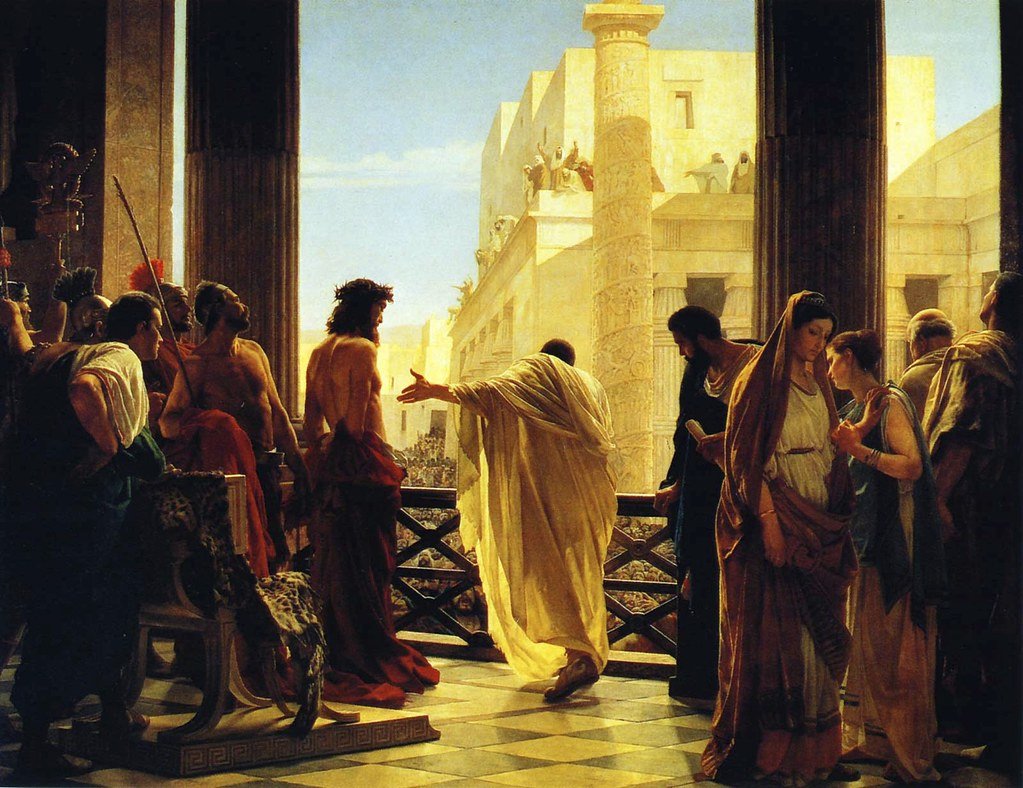 Darkness and Light. At war as never before.

Evil meets good. Face to face. The world of lies against the Man of Grace and Truth.

This is what comes to us in John 19. We have arrived at the climax of the Gospel records. The accounts related in the pages that follow present in great detail the accomplished mission of Christ.

John 19 – get to know it and your heart and mind may grow more settled and secure.

This Man of great words and miraculous works was at last renounced as a renegade. The “Hosanna” shouts and songs that greeted His entrance to Jerusalem only days before were no more. The memories of the loaves He multiplied to feed them were ignored and explained away.

Jesus spoke the answers of Heaven. He brought the Bread of Life to earth. Thousands tasted this Bread, and it was quite good, they had to agree. So good was what they tasted that some even gave thought to hatching a movement that would propel Him to a seat of power. They thought to fashion a throne for Him and force Him to sit upon it.

And yet it seems that those who heard and saw Him refused to swallow the Bread. The Word of Life was and is the true Bread. This Bread, He gave them. Yet they would not digest the reality of who He is. They refused to recognize the reality of the One who declared Himself One with the Father. They failed to grasp the truth about the I Am, who is and who was even before Abraham was.

The Lamb and His Blood

Though His Word and witness were rejected, the Savior still stood as the Lamb of God, ready to shed His Blood. He came to offer His Blood for all. And this Blood was about to flow out of Him. Every drop would be spilled. He would be wounded for our transgressions and bruised for our iniquities (see Isaiah 53).

To Pontius Pilate, He was handed over. When the governor’s interrogation could not produce answers to his liking, this ruler turned to torture. Jesus’ body was ripped to shreds as He was scourged, brutally pummeled with a whip. Imperial soldiers, hardened and merciless, took turns flogging the Christ with a dastardly instrument crafted of leather, rock, metal, and bone.

The soldiers mocked the Son as they battered Him. Adding further injury to their insult, Christ was a fitted with crown of thorns, which was hammered down upon His head. A robe of purple was draped upon Him.

Pilate sought to make a demonstration of the Son.  The sight of the degraded Jesus would be a spectacle the mob could not ignore, he figured. He brought out their King in this state of indignation and announced:

The last thing this governor wanted was to make a martyr of Jesus. The Romans understood history, and they knew that leaders of causes were very often more dangerous once dead than they were when alive. Click To Tweet

The last thing this governor wanted was to make a martyr of Jesus. The Romans understood history, and they knew that leaders of causes were very often more dangerous once dead than they were when alive.

Pilate wriggled and wrestled to prevent the killing of Jesus. By appearances, it seems he did not want this Man’s Blood on his conscience. He even took a basin and washed his hands before the priests and their agitated mob.

“Crucify Him, crucify Him!” The cry rose from the rabble.

“I find no fault in Him!” Pilate protested. The governor was shouted down and further challenged.

“He must die for He made Himself the Son of God.” The Jewish leaders responded.

The statement shook Pilate even more. He pleaded with Jesus:  “Where did You come from?” Jesus offered back only these words:  “You would have no authority over Me unless it was given to you from Above.”

‘No King but Caesar’

The more Pilate tried to set Jesus free, the more tangled and tense the situation became. At last, those leading the crowd threw something of a sucker punch at the governor:  ““If you release this man, you are not Caesar’s friend. Everyone who makes himself a king opposes Caesar.”

The blow staggered Pilate and so he capitulated. “Behold, your King … Shall I crucify your King?” He stammered before them all. The response was wretched:

“The chief priests answered, ‘We have no king but Caesar.’”

And so the great fall of Israel was complete. The people rescued from slavery in Egypt, the chosen ones given the holy Land of Promise, the very nation that had demanded a king in the days of Samuel, repudiated the rule of the Lord.

God heard and gave them over to their desire. Here, those holding the holiest office in the nation rendered Israel to subjection under Caesar. They rejected the Son of David, their everlasting King.

“We have no king but Caesar.” What has happened since those words were uttered? The descendants of Israel have suffered centuries of abuse and mistreatment. By year AD 70, the Temple and city they so treasured would be ransacked and demolished.

“And they took Jesus, and led Him away.”

Beaten and forsaken by His own, Jesus was marched to the Cross. With every step, He neared the fulfillment of His redemptive mission. He committed His mother, Mary, to the care of the Apostle John. This was the duty of the firstborn to a widow and the Son took care to do it.

Jesus was sustained by the Scriptures through this ordeal. In the midst of deep darkness and cosmic loneliness, He cried, “My God, my God, why have You forsaken Me?” from Psalm 22.

Every bit of prophecy ran through His thorn-ravaged head. “I thirst,” He groaned. A sponge sopped with vinegar was lifted to His lips, a fulfillment of what David wrote in Psalm 69:21.

That was it, the last essential to be fitted into the divine picture of the offering of His perfect humanity.

The Word was what remained even for Jesus. He had to exercise faith as Man in the oracles given by God.

Friends betrayed, denied, and deserted Him. Family and country disowned Him. Human government violated His rights.

There, alone and lifted up from the earth, Jesus tasted the sour wine and delivered the climactic sentence of human history:

He committed His spirit to the hands of the Father. He bowed His head and breathed out one last breath.

The skies thundered. The earth shook. Rocks split. The veil of the Temple was torn from top to bottom.

Done. And won. The battle for the souls of men was over.

The work of redemption was complete. All that came after this moment served to verify the validity of His atonement as the Lamb slain to pay the just wages due for the sins of the world.

His heart would be pierced and out of it would trickle the last bit of His Blood mingled with water. His body would then rest in the tomb for one Sabbath.

And on the third day came the dawn of the New and Living Way.

Let these thoughts be Bread. Remember the Blood and drink afresh the streams of rejoicing. Sing a new song to the reality of the work of the Son, the Savior, the King of kings, the Lord of lords.