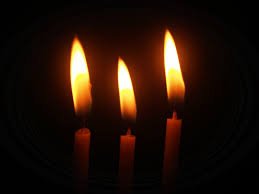 It was a promise Jesus made to His men. He was going away, and Another would be coming to them. Not just Another, but One like Him; more than like Him, One who was He Himself, Jesus tried to explain.

We are talking Trinity here, a divine reality that remains a mystery to our limited human minds. Father, Son, Spirit are One in essence and character. And, yet, they are distinct Persons.

We must rely on the Word and faith to embrace these things. I use “embrace” because it is a term of endearment, a word that carries with it a mood of love and affection. Embrace is to me a better word than “understanding” when we are talking about Father-Son-Spirit. To embrace is to wrap our arms around something significant and precious – a wife, a child, a pet. An embrace includes all of our hearts.

This is what I think the Lord desires for us to do when it comes to thinking about God in three Persons. Many great theologians and thinkers have wrestled with the Scriptures in an effort to better comprehend the incomprehensible. They have tried to wrap their minds around Trinity. Understanding God as Trinity will forever remain beyond us. Some like to suppose that all will be clear once we enter into the Eternal Age. I am not so sure that hard conclusions will define the character of that era. I think that mystery and wonder shall always be about our Father’s business, and the Son’s business, and the Spirit’s, too.

The reality of the God who is must involve our heart, soul, mind, and strength. This is the great commandment, Jesus said. The Trinity helps us with this. There is always more to know about the Lord. Deep calls unto the deep, says Psalm 42:7.

The language of John’s gospel is full of interchanges as Jesus describes Himself, the Father, and the Spirit as One. The basis for our theology regarding God as Trinity and God the Holy Spirit in His role and purpose come to us best in the talks of Jesus.

Jesus said it, I believe it, and it’s enough for me. It may seem like a trite statement, but it remains the rock of all theology to my mind. “I and the Father are One,” Christ proclaimed in John 10:30. He said that He would “send’ the Spirit to testify of Him and glorify Him (John 15:26; John 16:14). Christ made these declarations and left it for us to worship Him in Spirit and in truth.

In John 16, we get definition from Christ about the Holy Spirit and how He would operate in and through believers. The words the Savior spoke made it clear that the Spirit was and is a Person and would be personal. The One sent would be a Who, not a what.  The Spirit would not come as a force or a power, though He possesses both force and power.

In introducing the Spirit to the disciples, Jesus described Him right away as having three primary ways of operation — comfort, exposition, and inspiration.

The Spirit, Christ said, would come as Comforter – Paraclete in the Greek text. With Christ at the right hand of the Father as our Intercessor and Advocate on high, Someone’s presence would be required here on earth. The Spirit was sent as that Someone. He would be with and in the disciples as they took upon themselves the commission given to them by the Lord.

Next, Jesus tells of the Spirit in exposition. “He will reprove the world of sin and of righteousness, and of judgment.” I like the word “reprove” because it indicates that something is being said all over again. Proverbs 6:23 tells us that reproofs are the way of life. We learn important things in our youth, and then we are taught these important things over and over and over.

The Spirit unveils the essence of all sin as unbelief and uncovers what unbelief does to people.  It hinders them from receiving the mercy of the Lord. He reveals righteousness by pointing to Christ as the Son, the Lord of lords, the King of kings, the Priest and Prophet for all of Creation. And the Spirit testifies of judgment to come. The Spirit puts the finger on the work of evil here in the world’s system. Listen to what the Spirit says and hear the divine program of God as it plays out. He defines the devil’s destiny. He declares that Hell is real and that the enemy’s defeat shall come.

The Spirit supplied that words that we have in our New Testament. He led men’s mind to think with God and communicate what we now read. Click To Tweet

Inspiration is also the work of the Spirit. Jesus told the disciples that this One sent by Him would guide them into all Truth. There were things that God would say to and through these men, and these words would be viewed as holy words, oracles of God, Scripture for living.

Paul wrote this:  “All Scripture is given by inspiration of God, and is profitable for doctrine, for reproof, for correction, for instruction in righteousness:  That the man of God may be perfect, thoroughly furnished unto all good work” (1 Timothy 3:16-17).

The Spirit supplied that words that we have in our New Testament. He led men’s mind to think with God and communicate what we now read.

Those few sentences represent pretty much all Jesus told His followers about the Spirit. He didn’t delve into details. The Spirit would come, and He would direct believers in the truth about Him.

Fortunately, we have been given some illustrations of the Spirit’s work in the elements of fire, wind, and oil.

Like a fire, the Spirit purifies. Dead wood gets burned up; dross is boiled away from precious metals. The fire of the Lord can do this in us. The wind comes from we know not where. It blows through our world gently and also forcefully. So it is with the Spirit. He comes to refresh us in seasons of heat. He also comes mighty and rushing in order to blow away the dust and dirt that settles in the rooms of our hearts.  The oil represents the mark of the Lord upon us. We are anointed by Him; the Spirit has sealed us unto the day of redemption. We have been forever touched by God. His oil has been absorbed into our lives and abides forever. He cannot deny Himself.

We are His now and forever. May the Spirit reveal this to us more and more as the days go on.

Embrace the reality of who you are in Christ.