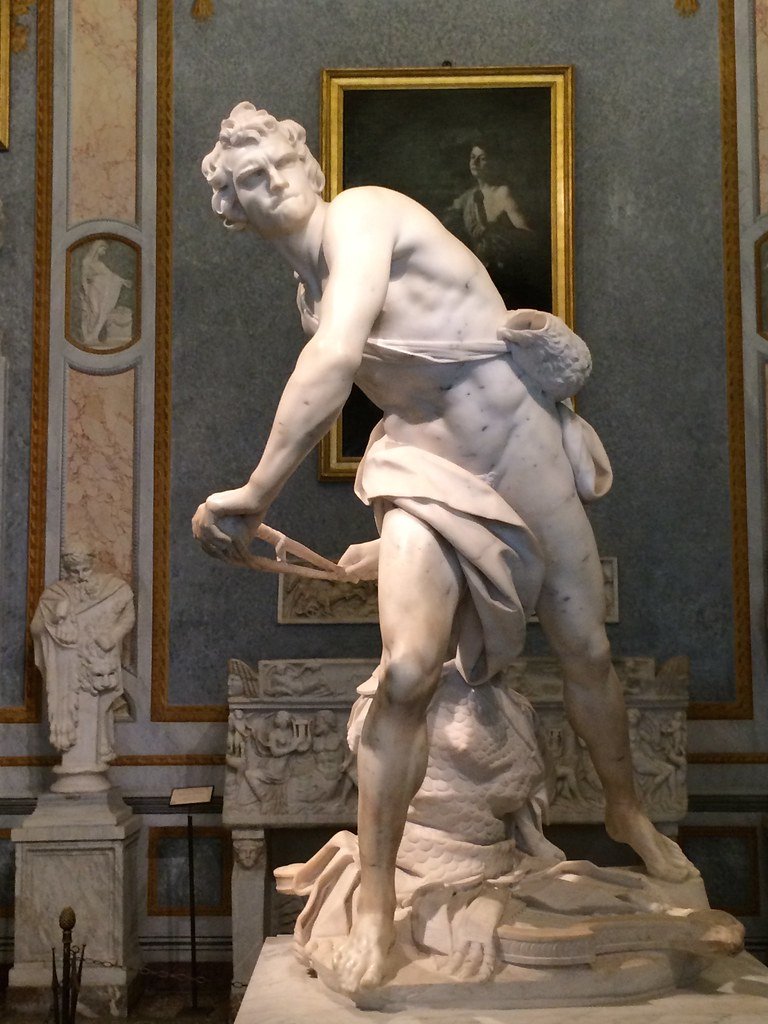 David stepped out from the crowd and stared down a giant. The gruesome Goliath had come to bellow of his greatness. He paraded about in heavy armor and had been doing so for days. By his sheer size and strength, he sought to impose his will upon the people of Israel and sought to enslave the nation to the Philistines.

“Give me a man to fight,” Goliath shouted.

No one moved at first.

Only this shepherd boy was ready to answer the call, as we read in 1 Samuel 17. None of the professional soldiers on sight were ready to put their lives on the line against this loud mouth.

King Saul, the ruler of the nation, the man who should have stood front and center before this challenge, got word of David’s willingness. The king offered David his armor, which at this point was just collecting dust anyway.

David took up the gear and found it unworkable. This armor was not made for him. He put it off and determined to go to the fight as a shepherd. He had his staff, a slingshot, and a few smooth pebbles gathered from a stream nearby.

This is the first lesson in the story about facing the giants in our lives. We have to be ourselves. We sometimes put on our costumes and expect to be empowered. I am thinking of how we dress up for job interviews. We want to look the part, and the suits we wear help us in our presentation. A wise interviewer, however, can look beyond the clothes and gauge a measure of the person wrapped in the suit.

A King in Trouble

David could not even fill out the armor of Saul. He was but a youth, a “stripling,” as Saul called him.

In reading the passages related to Saul, we discover a man who cared very much about how people thought of him. He was easily influenced and prone to fits of self-pity. He was the chosen, anointed man for the throne of God. Samuel the prophet poured the oil upon him.

By appearances, Saul stood above his brethren. He was a whole head taller than anyone else. For this reason alone, it seems the king should have been the one to step into a faceoff with a giant.

The king was in something of a quandary. He didn’t want to fight Goliath, and none of his other men wanted to fight either. And now here David stood ready and confident. He promised the king a victory. He’d beaten a lion and a bear. He knew how to protect his flock of sheep.

Could Saul really deny him this opportunity? He had to let David go out. The king fully expected that his soldiers would soon be picking up pieces of this boy after the giant was through with him.

To Goliath, David seemed like a mutt, a feisty and bothersome dog. Goliath boasted that David soon would be bird feed. The giant laughed with scorn, which is what a crowd of people did when Jesus showed up to a raise a little girl from death.

That giant’s taunts and laughter, I believe, was something David was looking for. Such howls signaled Goliath’s arrogance. David was being taken lightly and this set him off and running toward his enemy. For David was not casual about whom he was to battle. He knew that the only way to defeat such a one as this was to come at him in the Name of the Lord.

For David was not casual about whom he was to battle. He knew that the only way to defeat such a one as this was to come at him in the Name of the Lord. Click To Tweet

In His Name, David ran.

In His Name, David loaded his stone.

In His Name, David slung the stone at his target.

With God, the shepherd scored a direct hit to Goliath’s forehead and put him on his face. The giant’s own sword was used to behead him.

Isn’t it interesting that David so easily wielded a heavy, made-for-a-giant weapon? Saul’s armor would not work for him, but Goliath’s sword served the stripling just fine as he finished off Israel’s enemy.

The triumph brought shouts from the ranks of Israel’s army. They chased after the Philistines who scrambled from the war zone at the sight of their headless champion.

Perhaps, it was more than just the sight of Goliath that summoned the warrior in David. A frightened flock lay before a devourer, a mocker, a beast. This shepherd boy possessed a heart after God, and this heart was roused to action. The sheep of Israel were leaderless at that moment – they had a king and ruler, but what they needed was a Good Shepherd. And David proved to be just that for a nation in deep trouble.

We may tend to think of David as a special breed of person. In fact, this young man was a lot like us. His secret was this:  he believed God.

What made David so ready for war? His time in the fields did it. There, he let the Lord fill his mind and heart with songs. He gained courage from thinking with God. He pondered and played music. He waited upon the Lord and watched over the lambs. He served in humility, doing the job committed to him with quietness and confidence.

Yes, David’s charge at Goliath was bold, a daring act of faith. Such boldness, however, was rooted in the humility that had been worked into him. He was thinking more of God and His power than he was thinking about himself.

There was a kind of glorious content that fueled the battle character of David. That content was given by God and energized by His Holy Spirit.

I think David’s run may have been more of a dance for I think that he came at the giant with a song on his lips. Maybe it was this very song that he sang to the Lord:

“You have given me the shield of your salvation,
and your right hand supported me,
and your gentleness made me great” (Psalm 18:35).

Shielded and supported by the one true God, how could David have lost this fight?

We can get bullied by our own Goliaths. We are taunted by our troubles. Thoughts of defeat make loud noises inside of us. What are we to do? Think of God as David did. May we be still and know that He is God, as Psalm 46:10 tells us.

Let us sing and shout and let God bring down our giants today.

For more on facing the giants, check out these messages “A Man Who Can Fight” and “Give Me a Man” preached by Thomas Schaller, Pastor of Greater Grace Church of Baltimore.