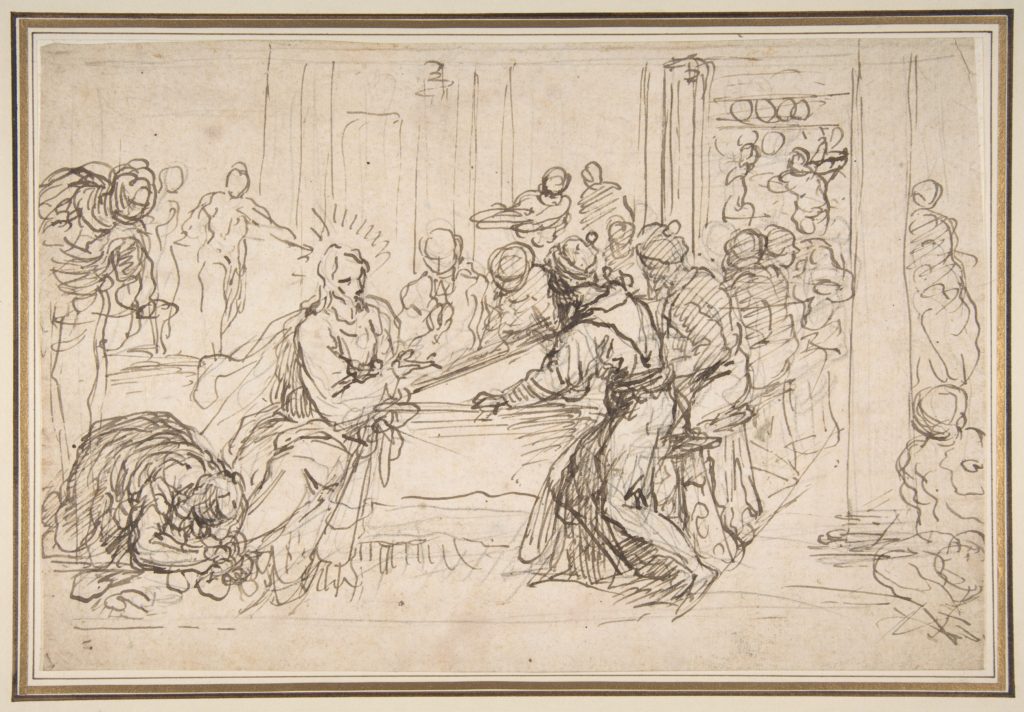 The episodes I want to examine are both found in the gospel of Luke. The first one is toward the end of Luke 7 and involves a Pharisee named Simon who asked Jesus to come to dinner at his home.

The word on the street was that Jesus was very comfortable to share a meal with tax collectors and sinners. This activity brought questions and scoffs and mockery.

Jesus had an answer for such slanders and accusations: “Those who are well have no need of a physician, but those who are sick. I came not to call the righteous, but sinners” (Mark 2:17). This habit of His was part of His healing mission, He said.

How would things go for Jesus at the table of “healthy” man?

I am sure the Pharisee’s invitation carried an ulterior motive. It was calculated, a setup of sorts. Simon knew the talk of Jesus. Some were calling Him a prophet. His words were words that projected authority; His talk left hearers astonished with its clarity and penetration. His miracle works of healing and deliverance created a remarkable stir, an expectation was growing that perhaps the Messiah had really come.

Yes, Simon indeed had heard of His sermons and His works. His invitation offered him an opportunity for this “healthy” one to gauge the carpenter’s Son from Nazareth at close range.

And so Jesus showed up. However, His reception at the home was of a perfunctory sort. His was a somewhat chilly and borderline dishonorable welcome when judged by the cultural standards of the day and region.

The Son was not met with a kiss of greeting; He was given no water with which to clean His dusty feet; nor was the courtesy of fragrant oil for His sun-parched brow extended to Him. Still, Jesus entered and took His place of recline with the others there and was prepared to enjoy the meal that was to come.

The scene at the Pharisee’s home soon was interrupted by one of the “sick” ones. A “woman of the city,” one well known as the village harlot, came in and she reached the Feet of Jesus. She began kissing those Feet and weeping upon them. She let her hair hang down – a somewhat immodest act when done in public — and with her hair she began to wipe those Feet. She lavished one more thing upon those sacred Feet as she broke a box of costly perfume and poured it out.

Likely this final act represented that there had been a real transformation in her life. This perfume was among the important tools of her trade in the sex market in which she trafficked. Here, she abandoned this valuable essence and sought to put aside her sordid livelihood. She was giving herself to the Lord.

Another from among the publicans and sinners had become a friend of Jesus. She crashed the dinner party and turned the event into a salvation celebration. For that’s what this became in the Savior’s heart anyway.

Simon the Pharisee was too incredulous and too filled with scorn even to speak. Instead, thoughts of contempt percolated within him: “This Man cannot be from God for no holy Teacher would allow Himself to be part of something like this,” he thought.

Jesus heard those thoughts as if they were spoken out loud. He delivered a parable on big debtors and small debtors and drove home the point that those forgiven much are those who love much.

Forgiveness? Did Simon even realize how much he needed it? He did at least “judge rightly” in noting that those who are shown greater mercy respond with greater love.

Jesus then brought things to head with these words to her: “’Your sins are forgiven.’ Then those who were at table with him began to say among themselves, ‘Who is this, who even forgives sins?’ And he said to the woman, ‘Your faith has saved you; go in peace’” (Luke 7:49-50).

A Man Up a Tree

The other episode we want to look at is in Luke 19. It happens in the town of Jericho. There, a tax collector named Zacchaeus was stuck in the midst of a crowd awaiting the Lord’s arrival. Being a short man, Zacchaeus got himself up into a tree to catch a glimpse of Jesus as He walked into town.

This time Jesus took matters into His hands, setting up His own lunch date with the notorious publican. “Zacchaeus, get out of that tree. I must eat at your table today,” announced the Savior.

The atmosphere was soon thick with consternation. Those in the throng muttered aloud about Jesus’ choice of company. The man was a cheat and a crook and all of Jericho knew it.

By the time Jesus reached his table, Zacchaeus was changed. Born again, the tax collector committed himself to new way of living. “And Zacchaeus stood and said to the Lord, ‘Behold, Lord, the half of my goods give to the poor. And if I have jdefrauded anyone of anything, I restore it fourfold.’ And Jesus said to him, ‘Today salvation has come to this house, since he also is a son of Abraham. For the Son of Man came to seek and to save the lost’” (Luke 19:8-10).

This is one of the clear presentations from Jesus on the matter of saving faith. Abraham believed and was made a friend of God. By faith, righteousness was counted to him. Lost and desperate Zacchaeus was called out of the tree and shown the way to new life in Jesus.

The Son came to seek and to save – us, all of us. Revelation 3speaks of the Lamb of God knocking on our doors, bidding us to open up to Him. If we let Him in, He will sit down at our table and sup with us (see Revelation 3:20).

It’s a great bargain, a great exchange – He gives us His life for ours. All we have to offer Him is our faith, and that’s enough for Him. Click To Tweet

It’s a great bargain, a great exchange – He gives us His life for ours. All we have to offer Him is our faith, and that’s enough for Him.

Just open the door. Believe God, believe Him more than ever. He forgives and restores and cleanses. Friends of God are made this way.

He sees as more than friends really. He sees us as One with Him. He sees each of us as He sees Himself, as the Son of the Most High.