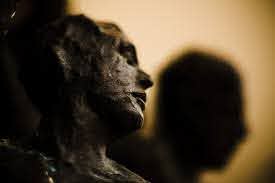 Job — it was the book I was told to read first. That’s what Kitty Garcia, a fervent, faithful grandmother, told me as she handed me a fresh Bible. It was modern translation, a paperback paraphrased edition, as I was told after I read through it in a couple weeks. Soon someone would present me with a leather bound King James study Bible.

And study I did.

I did as Kitty told me to. I opened first to Job and I learned some important things.

In Esther, as I wrote in my last post, the intent of evil is most visible in the person of Haman and his plot to eliminate the Jews from Persia. The ultimate victory and celebration also present themselves out in the open. There’s a clear narrative that has a happy ending.

Job provides a different perspective on things from what’s given in Esther. In these pages, we read of what’s happening on the other side of the veil, before the throne of Heaven. We also see a heart torn open, and its feelings spilled out in raw frustration and loneliness and wonder.

When I began to read Job, I immediately discovered that the devil is real and that he sets his sights on hindering the saints of God. Satan makes his accusations before the Lord for he is aware of how much we mean to the Almighty.

There’s a whole atmosphere that is unseen to us as we travel this sod. The one thing we must always keep in mind is that God is in charge. His presence is persistent, never ending and everywhere. He establishes the context of how all life proceeds. Psalm 115:3 tells us, “But our God is in the heavens: He hath done whatsoever He hath pleased.”

In effect, God employs Satan as a tool. It was Martin Luther who wrote, “Even the devil is God’s devil.” The machinations of hell are worked together for good to the glory of God and for the maturity of those who follow Him.

Another thing I learned from Job was that prayer and family are major matters in the Kingdom of God. This is how the book of Job begins. It presents the prime figure of the story as he relates to the Lord and to his home.

Job was a father of care and concern for his children and their relationship with God. He understood what it meant to be an intercessor. This father “continually” sanctified his seven sons and three daughters with offerings. He knew the reality of the Redeemer and the sinful potential of his own flesh and blood. He saw prayer for them as his great responsibility.

This emphasis on Job’s prayers in his parenting is significant to the setup of the story we read. I think it reveals the reason behind the Lord’s putting the spotlight on His servant. The Father God could trust this father’s heart with what was about to happen to him.

The book introduces Job as a man “perfect and upright.” It is said that he stood in awe of God and eschewed evil. That is, he possessed the beginning of wisdom and understood what to avoid and what to turn from.

Job was a father of care and concern for his children and their relationship with God. He understood what it meant to be an intercessor Click To Tweet

The contrast comes next when Satan shows up to an angelic conference before God. The devil is asked about his activity to which he responds, “roaming about the earth. …” The man established himself in ways of worship and would learn to rest in them; the devil was and is a being with no capacity for stillness. He’s constantly predatory.

The accusation that Satan presented to God was that Job served the Lord only because he had it so good. Leave it to hell to see things only at the surface level. The progression of the afflictions allowed to hit Job followed this line.

First, his possessions were stripped away. Then, his children died together, a house collapsing upon them. The news came at Job in waves. Yet he glorified God, confessing that he deserved none of what he had accumulated. Even his sons and daughters were gifts from Heaven. “The Lord gave, and the Lord has taken away; blessed be the name of the Lord” (Job 1:21). He refused to charge God with wrong.

Job weathered that onslaught, but Satan figured a bit of physical pain would turn Job bitter. The devil launched another dare before God: “…touch his bone and his flesh, and he will curse You to Your face” (Job 2:5).

Notice the wording here. The devil recognized the intimate relationship between Job and God. The upright man could face the Lord.

Let us reckon on what we’re told of Job. He is a faithful father, a man of prayer, a believer with his face turned toward the Lord. These realities should serve to color what comes after, because it isn’t a pretty story, although there is a blessed conclusion.

An encapsulated version of Job, I think, is found in Psalm 13. This song begins this way: “How long, O Lord? Will you forget me forever?”

As I read, I hear Job saying words like this again and again. And I hear Jesus too: “Let this cup pass … My God, my God why have You forsaken me?” Job knows God, but he misses the sense of His presence. He knows that his turmoil is not the result of an offense against the Almighty, as his three friends insist that it is. He knew what offerings were all about. And so he refuses to do the religious thing and attempt to buy favor and relief. He holds fast to his integrity, to the wholeness and oneness that he knows he has with God.

Redeemer, that’s how Job knows God, as the Redeemer alive and as the One who will make him alive with resurrection when all is said and done (see Job 19:25-26).

This relationship endured in spite of the strong words, since Job held nothing back. He gave vent to the thoughts and feelings that came with his loss and his pain. He did not try to hide behind ritual and ceremony and superstition. He was forceful. He pushed God.

And God pushed right back. The Lord posed more than 80 questions to Job as He laid out the breadth of His sovereignty. Iron sharpened iron, as Proverbs 27:17 puts it. God revealed Himself to His servant, and Job learned to be still. He came to know God in a depth that only these conflicts could bring him to.

The conclusion of the matter was that Job emerged more of a man of quietness and confidence. He remained a man of prayer and he was made father to seven more sons and three more daughters – women renowned for their beauty. Such daughters must have been a great blessing to this faithful father and friend of God.

As for Satan, he was left to roam to and fro. His strategy of accusation was foiled by a saint who knew the Redeemer and the power of His resurrection. It was fear of the Lord that guarded Job’s heart so that he no longer feared death.

“But I have trusted in your steadfast love; my heart shall rejoice in your salvation. I will sing to the Lord,
because he has dealt bountifully with me” (Psalm 13:5-6).