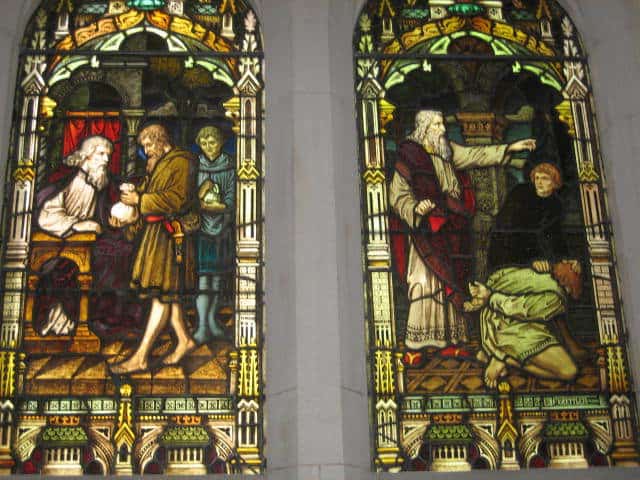 I read something horrible this week. A pastor and ministry leader pleaded guilty to molestation of young girls and was sentenced to nearly 20 years. The man is 75 and in poor health. He’s likely to spend the rest of his days behind bars. It is something he expected and has accepted. This man blamed no one but himself for his failure. Human justice has been administered, as God ordained it to be.

What now for us? How should we view this broken person and those he left broken? Some minds will think this way: “Good riddance — such a man should fry for his crimes.”  Heinous acts against little girls move us to rage. Are there any humans more vulnerable than these little ones? Our hearts should ache at the thought of what someone’s daughter —our daughter —had to experience and the resultant pain and scars she will carry through life.

For the victims, healing will present massive emotional and mental challenges. The big question is this: Will they ever be able to forgive?

The man doesn’t deserve their forgiveness, some would say. And that’s very true —for this criminal and for all of us. None of us can merit forgiveness. The essential essence of mercy is that it removes from us what we rightfully deserve.

Jesus, on the Cross, spoke a mighty sentence: “Father, forgive them for they know not what they do.” None of us knows what we are doing and we are all in need of His forgiveness. Christ took upon Himself the sins of the world and now extends mercy to all — whosoever will may receive His mercy and be made new in Him. Once we enter into this relationship, we are called to forgive as He has forgiven us.

We can get forgiveness all wrong. It is easy to think that we are to forgive in order to set the offender free. Actually, the real release of forgiveness falls to the one who forgives.

Peter thought he was a pretty good guy with a generous capacity for mercy. He had walked with Jesus for some time. He left behind his fishing business at the Sea of Galilee. He’d been enlightened with a powerful revelation regarding the identity of Jesus — “You are the Christ, the Son of the living God.” It was a statement that Jesus confirmed as coming from the Father.

In Matthew 18, Peter posed a question about forgiveness: “Lord, how many times shall I forgive my brother or sister who sins against me? Up to seven times?” The Apostle thought seven might be a decent number, one that he might even be able to reach on a given day.

Jesus responded, “I tell you not seven times, but seventy times seven times.”And before Peter could react, Jesus launched into His parable about an unforgiving steward.

The story goes like this: A king had a servant who was deep in debt; he owed what amounted to hundreds of bags of gold. In those times, debtors and often their families were sent to debtors’ prisons and tasked to perform hard labor until their debts were satisfied. The king was prepared to commit this man, with his wife and kids, to just such a place.

The servant fell to his knees and begged his master to forgive the debt. It worked. The king granted this servant mercy; he forgave the massive bill and sent the servant on his way.

One would think that this servant would celebrate the mercy bestowed upon him by showing mercy to others. Jesus, however, tells us that the forgiven servant was not himself a man of mercy.

Rather, this servant found a fellow servant who owed him few bucks, seized him by the throat, ignored the debtor’s plea for forbearance and had him committed to jail.

Others saw the whole thing unfold and reported back to the king. They were grieved by this servant’s actions, and they were compelled to tell their master.

A Reversal of Mercy

Here’s where the story takes a surprising turn.

The king becomes enraged once he hears of the servant’s actions. And this, Jesus said, led to a revocation of the debt forgiveness extended to the servant. “Should you not also have had compassion on your fellow servant, even as I had pity on you?” said the king. This servant was then delivered to “the tormentors, till he should pay all that was due unto him.”

To grace-oriented, Finished Work believers, it seems strange to our minds that mercy would be given and then taken away as depicted in this story. The Savior often employed hyperbole and exaggeration in His teachings to drive home His message. That is, He said big, impossible things – “if your hand offends you, cut it off,” for example. Here, Jesus made a point in answer to Peter’s query on forgiveness. Unto whom much is given, much is required. We have received great mercy and so we are to give mercy freely and faithfully to all.

We have received great mercy and so we are to give mercy freely and faithfully to all. Click To Tweet

The final sentence of Matthew 18 delivers a crushing conclusion: “So likewise shall my heavenly Father do also unto you, if ye from your hearts forgive not every one of his brother their trespasses.”

Torment comes to those who live unforgiving lives. That is what I read in Matthew 18. Roots of bitterness can penetrate deep into hearts and minds.

Bear with me, please. I do not mean to diminish the pain and suffering inflicted upon people. We are broken beings in a broken world. We hurt each other in big and small ways. Suffering is real. Consequences are sometimes irreversible. Damage can be permanent.

Forgiveness is hard – impossible really. Human effort falls far short of what God speaks of in the Scriptures – the seventy times seven standard of forgiveness. Only by the Spirit of God can we truly extend His mercy.

From this parable, I draw a couple of important principles. One, when we see mistreatment, injustice, and ungraciousness, we should feel disturbed and we should be moved. We should go to the Master with our grievances. May we pour our complaints before Him. And we should expect Him to deal with them in His order and according to His purposes.

Another principle I see here is this: “Vengeance is mine, I will repay,” says the Lord in Deuteronomy 32:35. Too often we covet what belongs to God alone. We long to see clear demonstrations of judgment. We want offenders to pay and to pay publicly. It is right that justice is served and that victims do get to experience a day of reckoning. But what do we do when this doesn’t happen right away?

We consider this–His ways are higher than our ways. His hand reaches deep and His methods are far more effective, His discipline way more severe, than what we could imagine and contrive.

May we trust in Him and His ways and look toward a time and a place when all shall be made right. Then we shall sing, “Holy, holy, holy is the Lord God almighty.”