God Blessed from the Beginning 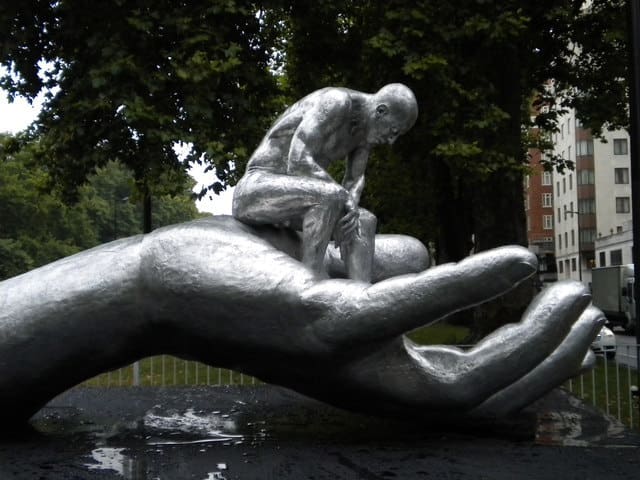 The matter of our identity as people is addressed early in our Bibles. Genesis 1 and 2 define the essence of humanity in clear terms. The Lord made man from the dust of the earth, and man was made alive by a puff of His breath.

The Creation account starts with a description of the earth:  “The earth was without form, and void, and darkness was on the face of the deep” (Genesis 1:2). Dark, empty, undefined – this is how things were. Then God spoke, and addressed the darkness – “Let there be Light.” What was empty, the Lord filled. The heavens were populated with planets, moons, and stars. These terrestrial fixtures set the night aglow with the light He had spoken.

Next, the seas came alive with swimming creatures great and small. The earth brought forth trees and plants and flowers. Flocks and herds and swarms of birds, beasts, cattle, and creeping things came and were pronounced “good” and told to get growing.

At last, came the moment for the fashioning of man. Near the close of Day 6 in the Creation program, God said, “Let us make man in Our image, according to Our likeness and let them have dominion …” (Genesis 1:26).

None of the other creations were given such attention as this. After His own image, the Lord formed man – male and female, He made them. Now, the details of Adam, his home, his work, and the wife made from him and for him, are set forth in the words of Genesis 2. However, in Genesis 1:28, we read a most distinctive element related to human origin. People, this verse declares, are “God blessed” with His own image and appointed to have dominion over “every living thing” in the sea, in the air, and on the earth. God told them – man and woman — to be fruitful, to multiply, and to fill the earth.

Through His definition, God brought form to Creation; where once there was void and darkness, order and substance now prevailed. And, the highest order of substance was blessed man, a being not only commissioned and good, but a being bearing something of God within him.

This uniqueness of man made him an instant target for the devil, embodied in the serpent that slithered into the Garden that God made for the man and his woman. The serpent was and is an angel in rebellion, a creature who has forsaken his position in the divine order of things.

Angels were made to serve. They exist as ministering spirits appointed to serve “those who inherit salvation” (see Hebrews 1:4). John the Apostle, his heart overwhelmed at the glory of prophecy unveiled to him in Revelation 19, was chided when he fell on his face to worship one of them – “See that you do not do that!” the angel said. “I am your fellow servant. … Worship God!” (see Revelation 19:10).

This “worship” was precisely what Satan sought; he even tried to get it from Jesus in Matthew 4. Made as Lucifer, one who bore the light of God, he turned to seek glory for himself and purposed to be “like the Most High” (see Isaiah 14:14).

The Last Made First

Man, from the moment of his making, was beyond being “like” the Most High, he was the very image of God and full of His very breath. “The last shall be first,” Jesus said, and I think it applies to how God sees humans. Man, made of inglorious dust, gets the glory of God as part of his being.

This is something the devil can never be and he knows it, so he deceived man along the lines of his identity. The serpent hissed out the lie that man needed something more to be “like God.” Adam and Eve took of the Tree of the Knowledge of Good and Evil with that wrong thought in mind. Oh, they added something to themselves all right – a foolish and fiendish nature that questions the character and heart of the Lord.

The fact of the matter was, at once, and still is, this:  man was blessed with the image and likeness of God, according to His inspiration; He breathed and made man a living soul.

It is no stretch for me to say, “I am the I AM because He made me so.” The Fall in the Garden corrupted man’s thought process related to this reality, but the Cross of Christ has made it possible to recover our sense of His image about us. Through our new birth in Jesus, we rediscover the understanding of how we were made and what we were made for.

As believers in Jesus, we are hid with Christ in God, according to Colossians 3:3. This cannot be taken from us. Who we are totally rests on what Christ has done. Let us understand this and hold fast to it. It is the secret to our sanctification, to the outworking of what God made us to be at salvation, when He gave us a new heart and a new life.

May we learn to see ourselves as He sees us, as His saints, holy and set apart for Him. We are God blessed.

Want to hear more about who we are in Christ? Check out “Shockingly Holy Saints,” a message preached by Thomas Schaller, Pastor of Greater Grace Church in Baltimore.