He Must Increase, I Must Decrease 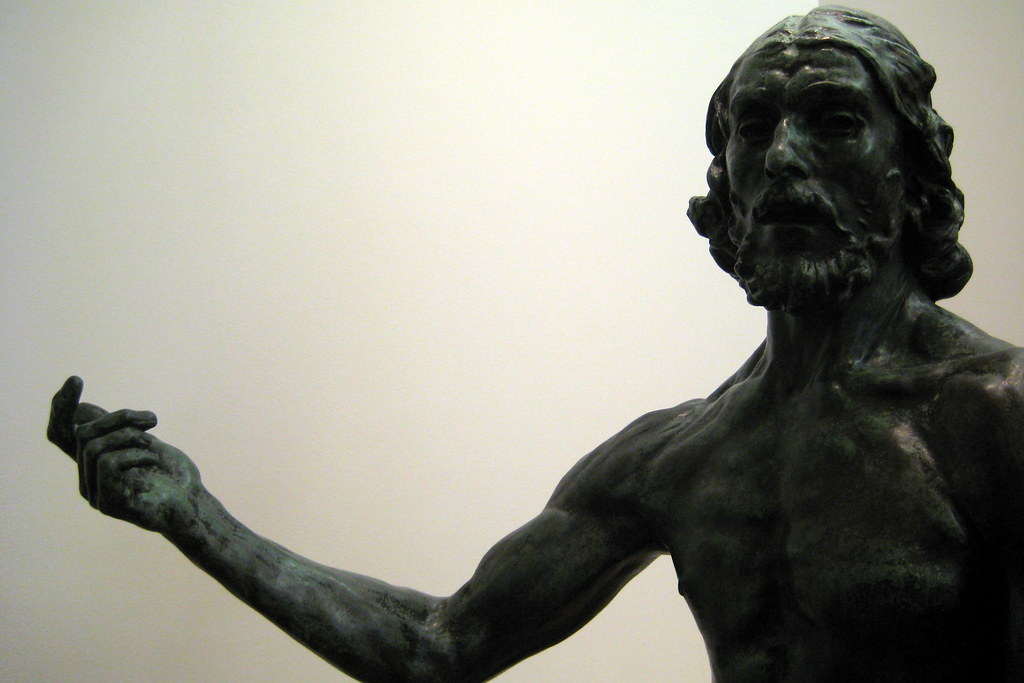 John the Baptist saw the Lamb and he knew that his work was nearly done. He had felt the presence of the Lord even before he was born. He delighted in the coming of this day.

Like Jesus, his birth was a work of wonder, an answer to the prayers of an old priest and his wife. He answered his call and he raised something of a church in the fields.

The Baptist had his team, his followers who were drawn to his message of preparation. He had his look and his way. He made his home in the wilderness by the banks of the River Jordan. He wore camel skins and he ate locusts — think bug protein mixed with wild honey — yum, yum.

His ministry was not marked by dramatic demonstrations of power in the usual sense. Elijah called fire down from Heaven; John, the final Elijah, spoke words that burned instead.

Miracles of a certain, less visible kind did accompany his messages. People heard his cry, “Prepare for the way of the Lord.” John was the pioneer, a Caleb who believed the Promise of the Lord. He spoke forcefully and his words were believed.

Soldiers and tax collectors, harlots and thieves were especially touched, cut to the heart. These poor in spirit and mournful over their sins came to the Jordan to bathe. They longed to have their uncleanness washed away.

These changed people were the miracles of John the Baptist. Every soul touched and moved to repentance represents a miracle of God’s Redemption. This is holy work of the Spirit and the Truth.

Soldiers asked John of how they should now live, having come to see their need for the water of baptism. “Serve, protect, but don’t pressure or abuse,” John said. “Don’t live as bullies and shake down people for money beyond your salaries.”

To the tax collectors, John advised them to stick to the code as written. They were told not push for bribes through extortion. Be content with what Rome pays, they were told. And they listened. They became doers of the Word.

John’s message and the responses to it also attracted the attention of the Pharisees. These religious leaders had a financial stake in the repentance game that they had set up in the Temple. Offerings were to be made for transgressions and the Pharisees had devised a system to keep people coming to buy animals to sacrifice and to change money for such purchases.

Here was John, telling people to simply dip in the Jordan and be cleansed. It was the message that Elisha sent to Naaman the Syrian who came to the prophet stricken as a leper. That prophet, like John, charged nothing for this work of God’s power. Naaman was reluctant at first and somewhat irritated at the simplicity of it all. But eventually he did has he was told and went down in the river and his leprosy was gone. His skin became like that of an infant’s. He was born again.

John’s message cut to the consciences of people. They came as ones drawn by truth and hope, and they found comfort there. Click To Tweet

With John at the Jordan, another kind of leprosy was being healed, the leprosy of hearts and spirits. John’s message cut to the consciences of people. They came as ones drawn by truth and hope, and they found comfort there.

The Pharisees were also addressed by John. He spoke to the deception going on in them. They questioned John, “Are you the Messiah?” He refused to take the bait. He would not let himself be bitten by these vipers and have his ministry poisoned by ambition and pride.

John was from a Temple family. His father, Zacharias, had offered incense in the Temple and on that day Zacharias got the promise of John’s coming. John likely could have taken a role in the religious system. But he did not. He increased with the increase of God, until his time was done. It wasn’t a long season of ministry, but it was real and right. He told the Truth and the Truth set people free.

The Baptism of Jesus

John knew who he was and what he had been called to do. The baptism of water dealt with the surface observations that people had come to realize. He told his questioners that he was sent ahead of the One, the Christ, the Anointed. Another baptism, one of fire, one aimed at the heart and accomplished by the Holy Spirit, was on its way. So holy was the One to come, John said, that he was unworthy to even lace His shoes.

And then Jesus did arrive. He came to the water. John recognized the holiness at once. They were relatives and John pleaded to be washed with the washing of Jesus.

This, however, was a moment of clarification and qualification. The Son had come out of the tribe of Judah. He possessed all the qualifications to take the throne of David, but He had to fulfill the demands required of the priest to approach the Throne of Grace, the Mercy Seat. His royal lineage was in order, physically and administratively as shown by the genealogies in Matthew 1 and Luke 3. Jesus was suited to be King, the true Son of David.

Christ, however, also came to be the great heavenly High Priest. Leviticus defines the process of initiation for the priests. This process included a washing with water. He who knew no sin and purposed to fulfill all righteousness; He would complete the requirements of the priesthood down to the last jot and tittle.

John, of a priestly family, dipped Jesus into the water. The confirmations came at once. The Holy Spirit came down in the form of a dove. The Father spoke, “This is My Beloved Son in whom I am well-pleased.”

The Lamb of God could now make an offering of Himself as the Priest, one after the order of Melchizedek according to the book of Hebrews.

John knew his place. He told those still with him that he was not the Bridegroom. He was the friend of the Bridegroom. He, as something of a Best Man, made things ready for the Bridegroom to take His Bride. His joy was to see the days of the Wedding of the Son be set in motion. Who knows? Perhaps John the Baptist will share a toast at the Marriage Supper mentioned in Revelation.

“He must increase. I must decrease.”

Strong and wonderful words are these words. Am I ready to say them as John said them? Could I give up something? Am I ready to get out of the way so that God may move in His way?

That’s a major moment in our lives. It is a mark of maturity for our faith. To know that God is finished with me in a certain way represents a remarkable sense of understanding. We tend to hold too tightly to things that are never ours to begin with.

Can we let go and let God?

It’s a big question. He must increase. We must decrease. Our hearts must be ruled by His peace.

We can let things of the old man be stripped away. The demands to keep up and manage appearances can be gone.

We will find our rest only in Him.