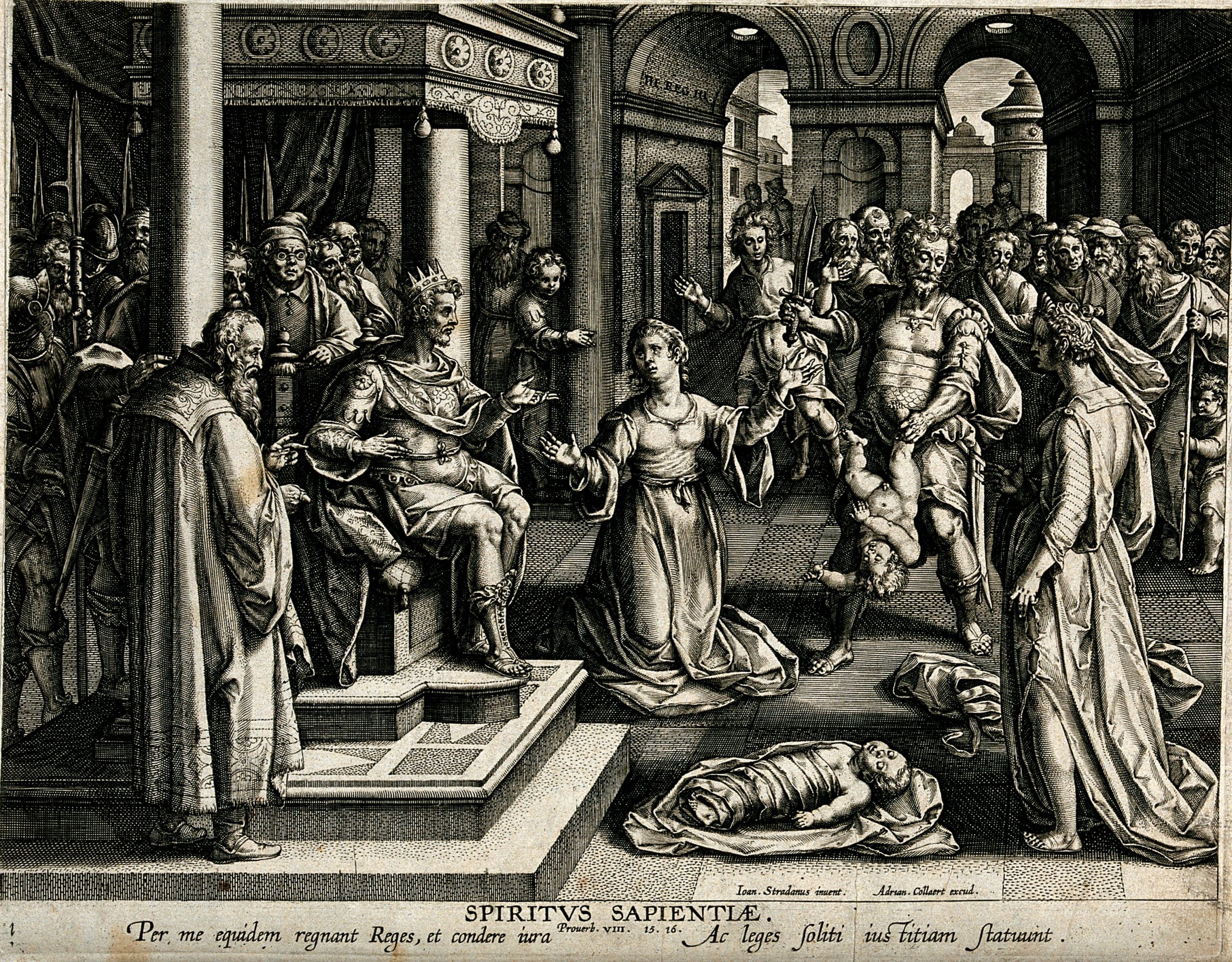 Solomon was now on the throne, sitting as ruler over the nation of Israel. How deep and wide was his authority? How available was this man to his people? From this report, his reign and wisdom reached to the very depths and extreme edges of Hebrew society.

These women were sex workers and single mothers all at once it seems. Yes, these things were a part of life in Jerusalem even in its most glorious days under the reigns of David and Solomon.

This was a most tragic case – one involving life and death, and one that exposes the raw reality of human hearts. These two women shared a home and both had recently given birth. One accidentally smothered her infant during the course of breast-feeding in the night. Her response to seeing her child lifeless was to swap babies – she put her dead child in bed with other woman and claimed the living infant as her own.

In the morning, however, the ruse was discovered and so began a bitter and nasty dispute that reached the throne room. Each woman there argued vigorously that she was mother to the living boy.

Solomon seemingly flummoxed by the conflicting testimonies came to a point of decision. The king summoned a swordsman and ruled that the baby be sliced in two so each woman could have a share of him.

At this point, the issues of the heart opened the way to the only righteous verdict. The boy’s true mother pleaded for his life to be spared, while the pretender wanted him divided — and dead.

“Then the king answered and said, ‘Give the living child to the first woman … she is his mother.’”

News of this decision spread quickly throughout the land and the people were in awe. Why? Because they knew that the wisdom of God was in Solomon to “do justice.”

Some may classify this dispute as something of a waste of time for the king. Why should the one with the crown be asked to deal with such a common case?

Justice must be served from the bottom up or it is not justice for all. These were struggling people whose survival depended on the selling of their bodies. The king could not ignore such poor ones. And Solomon would affirm this with a number of his proverbs:

“Whoever oppresses a poor man insults his Maker, but he who is generous to the needy honors him” (Proverbs 14:31).

“The rich and the poor meet together; the Lord is the maker of them all” (Proverbs 22:2).

“Do not rob the poor, because he is poor, or crush the afflicted at the gate, for the LORD will plead their cause and rob of life those who rob them” (Proverbs 22:22-23).

“A righteous man knows the rights of the poor; a wicked man does not understand such knowledge” (Proverbs 29:7)

“If a king faithfully judges the poor, his throne will be established forever” (Proverbs 29:14).

Justice must be served from the bottom up or it is not justice for all. Click To Tweet

It was the encounter with two prostitutes that God used to demonstrate the measure of wisdom that He had given to the king of His Chosen People. The marginalized – the widows, the orphans, the publicans, and the harlots – are not outside the care of their Father and Creator.

Not all understand this about the Lord who is Lord of all.

Jesus Himself was lambasted by the religious ones as “the Friend of sinners.” This Solomon story reveals that God’s king must always be ready to serve the ones labeled as the least among us.

A Testimony of the Lord

Solomon, at the time, perhaps could somewhat identify with these women. His insecurities may have been on his mind as the new leader of what had become populous and powerful in the region and world at large.

Remember, Solomon was the son of Bathsheba, the bride David stole from one of his mighty warriors. David slept with her, and when she was found to be pregnant, he orchestrated a battle scene that got the reliable and loyal soldier killed. The king then took Bathsheba as his own.

As a boy, Solomon surely heard the whispers about his mother and how she came to the palace. And he likely heard his father David sing of his sin and of his repentance and forgiveness. It’s well detailed for us in Psalm 51. “Have mercy on me, O God, according to your steadfast love; according to your abundant mercy blot out my transgressions. Wash me thoroughly from my iniquity, and cleanse me from my sin!” (Psalm 51:1-2).

Later, after he supervised the building of the great Temple, Solomon would have another kind of audience with another kind of woman – the Queen of Sheba. She came with questions as well as an understanding of the Lord as the Personal and Holy God of all. At the end of her time in Jerusalem, this queen rejoiced to see what God had done. With her words, she confirmed the nature of the Son of David as King of Israel:

“Blessed be the Lord your God, who has delighted in you and set you on the throne of Israel! Because the Lord loved Israel forever, he has made you king, that you may execute justice and righteousness” (1 Kings 10:9).

Solomon, by the Spirit of God, revealed the heart of God for the high and for the low. The Lord uses His people to show that He is all and in all (Colossians 3:11).