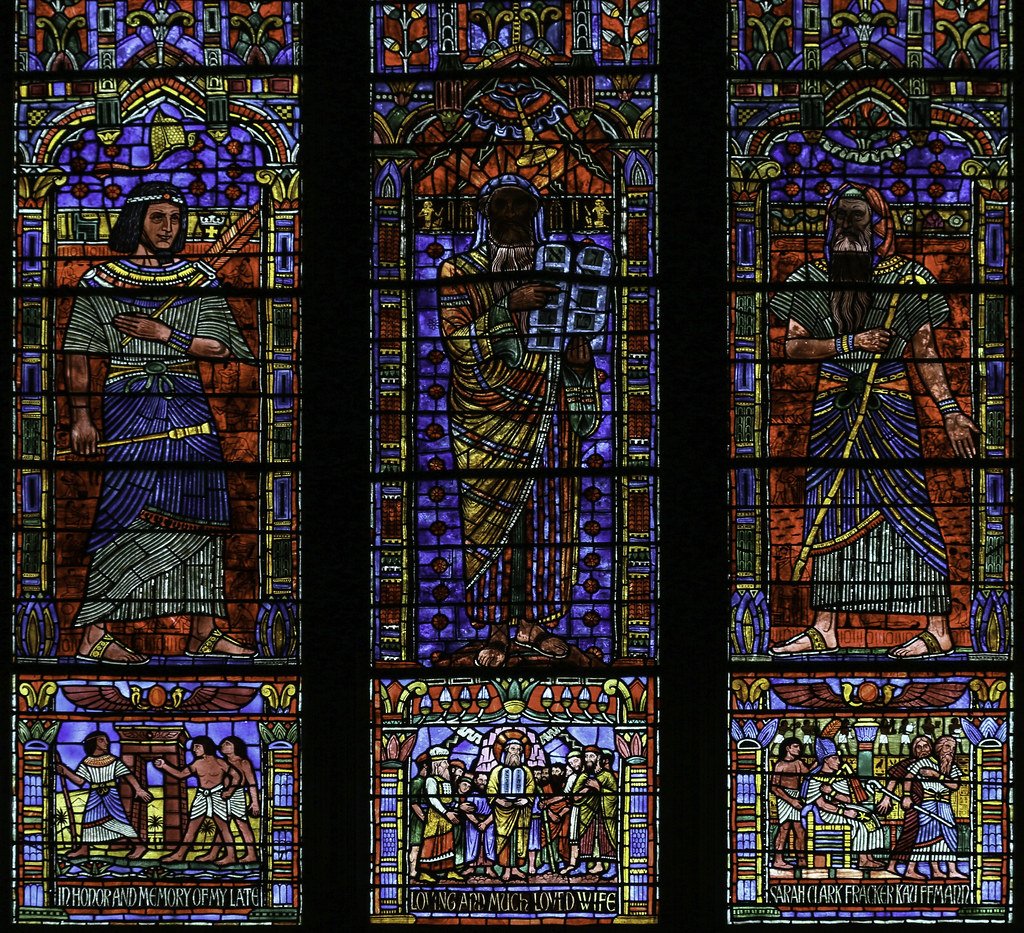 Moses came to face Pharaoh just as he was. By appearances, there was so little about him to recommend his status as a diplomat. He was clothed and equipped with the garb and the tool of a shepherd. He came from the rugged environs of Midian. He had arrived with his rod and his big brother Aaron — nothing else.

And he did come with a message from the Lord: “Let My people go, that they may hold a feast unto me in the wilderness” (see Exodus 5:1).

It was rather interesting way to enter into the audience of a king. This man must have seemed especially odd to those in the palace court on that day for he claimed to hold a place of rank. He presented himself as the representative and ambassador for the enslaved people of Israel.

Moses’ speech was declaration of relationship. The people of Israel belonged to God, and He desired that His people come to Him, to take a three-day journey into the wilderness. There, they would celebrate a feast together.

Basically, it was invitation to dinner that Moses delivered. And Pharaoh seemingly laughed it off. He said he knew nothing of the Lord. This ruler and his people recognized gods and goddesses for sure. The Egyptians had their priests and they did pay homage and make sacrifices to a slew of so-called deities.

Pharaoh wasn’t about to turn Israel loose. For more than 400 years, Israel had lived within the borders of Pharaoh’s kingdom. In fact, this empire would have ceased to exist long ago had not one of the original Israelites been sold into service to an Egyptian official. It was Joseph who shared the mind of God with an earlier Pharaoh, interpreting strange dreams and delivering the nation from the effects of a grievous famine.

These slaves were too many and too important to Egypt’s way of life to be set free. What’s more, Pharaoh lived in fear of these people. He strived to limit their numbers and keep them under control. He tasked them with heavy labors in the brick pits and fields. He issued orders to exterminate their sons. The boys were to be tossed into the Nile River.

One of those sons under the death order was Moses. His mother followed the letter of the law. She laid her infant in a basket, outfitted it and sealed it, and she set it afloat in the waters. The current carried Moses right to the daughter of Pharaoh as she was taking a bath. She saved the boy and raised him in the shadow of the throne of Egypt. Who knows, this one may have even been in training to ascend to the leadership of the nation.

Moses, however, knew of his connection to Israel. He could not ignore it. One day, he became enraged at the sight of one of his “brothers’ being beaten by one of Egypt’s slave drivers. Moses took the law into his own hands, killed the supervisor, and tried to hide his body in the sand.

When the killing was discovered, Moses was driven out of Egypt. He wound up in Midian. He took a wife, became father to two boys, and served as a watchman over his father-in-law’s flocks.

Years later, Moses was back at the palace of his earlier days.

Something remarkable happened to him in the fields of his exile. The Lord came to him, revealing His glory as a fire that rested upon a bush. A growth of common vegetation became a habitation of God. He set it aflame with Himself and spoke to His man.

The God who can be Known

It was at that bush in that wilderness where the story of the one true God began to take full shape. The idols of the world possessed no such glory or power. These god images were formed by the hands of men and were more often than not grotesque expressions of inner desires and lusts. They were crafted to carry people along on power trips and foolish, fleshly adventures.

The Lord whom Moses met that day was the God, the one and only Creator of Heaven and Earth. He was the one God who could be known.

And He told Moses’ His name: “I AM THAT IAM” – Yahweh in the Hebrew. What the Lord showed Moses that day was that there was no God like Him. He referred to Israel as His people. He spoke of the promises He made to their fathers. He said that He would keep these promises.

The cries of Israel in bondage were heard. Moses was sent to reveal the Lord. “Let My People go,” God demanded. He had a table prepared for His people in the wilderness.

This God the Egyptians could not comprehend. What kind of Lord asks such a thing?

It is likely that much of Israel, too, had lost sight of the Lord. Over the years, the stories of God visiting Abraham and Isaac and Jacob grew stale to many I am sure. Still, there were those who believed, such as the midwives in Exodus 1. They flat out disobeyed Pharaoh’s order to kill the babies. These women, named Shiphrah and Puah, were known by God and honored as heroes and rewarded with husbands and households with children.

Winning with the Lamb

The Lord did reveal His power mightily before the Egyptians, taking aim at every one of their idol gods in a series of plagues. He made the Nile red with blood. He sent swarms of frogs and flies and locusts and rained fiery hail from the sky. He boiled break out upon their skin and stifled their cities and houses with thick darkness.

But the Lord spoke most forcefully through the Blood of the Lamb. In the Passover, He demonstrated that the issues of life and death belong to Him alone.

Israel was given words of instruction. Death was coming to Egypt. It would pass by only those sheltered behind doors with the Lamb’s Blood painted about them.

The Lord heard our cries in the bondage of our sin. He came and defeated death which held us fast in its grip. Click To Tweet

In those homes, the people were safe as they gathered around the table to eat and pray and sing. Death came and went. These ones lived, and so their descendants continue to tell and be told the story of this night like no other, the night when the Lord revealed the depth of His love for His people.

In the fullness of time, this Passover and the effect of the Blood of the Lamb would become a revelation extended to all people. The Son came for God’s people, ones called out from among every tribe and tongue and nation upon earth.

This is our God. He shows the most significant thing about Himself through the Lamb, a spotless, unbroken Lamb. Jesus is the Lamb. We are covered and safe under His Blood. He knows us and we know Him.

The Lord heard our cries in the bondage of our sin. He came and defeated death which held us fast in its grip.

“Let My people go.” He said it and we must believe it. We have been set free. He is God with us. His Holy Spirit fills us with His fire as He filled the bush there in the desert with Moses.

Christ’s has made us lights in this world that remains something of a strange and evil wilderness. Let us stand and speak for Him.