Listen Well Amid the New Babel 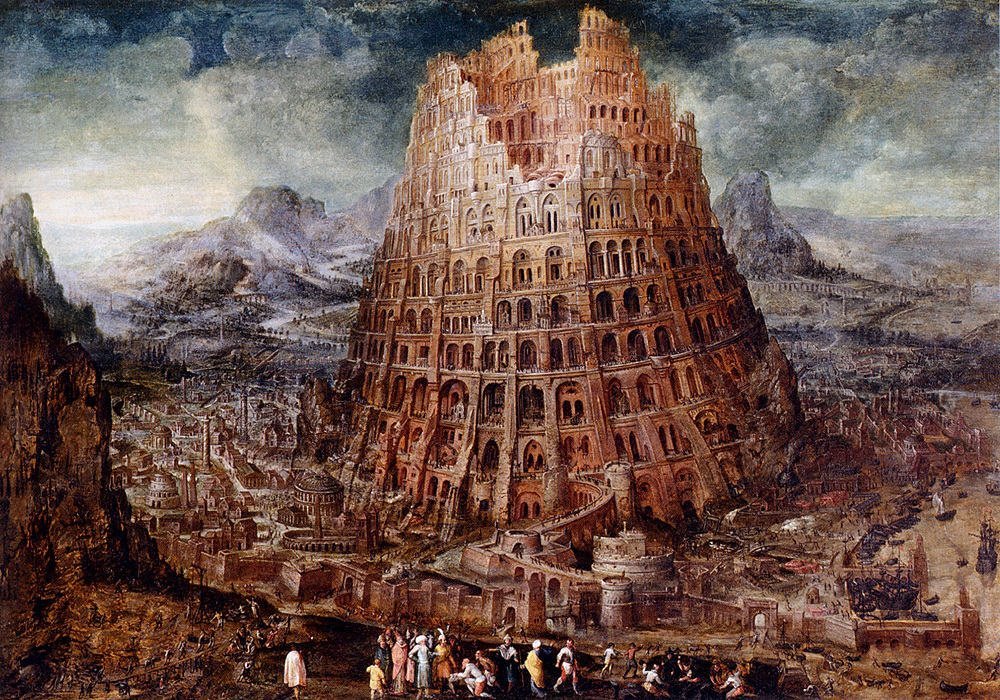 A new Babel is here.

Just the other night, I heard a veteran Hollywood actress gush at her choice of roles now that there are some 474 scripted television programs. These are merely the dramatic ones and the number does not take into account the plethora of “reality” shows, sporting events, game shows and news broadcasts.

Think about that for a moment. Our airwaves are populated with an unprecedented variety of alternative universes, worlds born in vain imaginations and presented as ways of life.  So many are saying so many things, but really all of them are saying the same thing in different ways. And that message is this: “Make a name for yourself.”

This is nothing new. Long ago, the people of earth came together with the same thing in mind. We read about it in Genesis.

They came to the plain. It was a place that lay flat, a ready space on which to build, an area that could be formed into a comfort zone. There, in Shinar, the people gathered. All spoke one language and were of one speech. This means that not only were the words the same, but the spirit behind the words was “one” as well.

These people were about a common purpose.

They came together to be part of an enterprise, a building project. Bricks baked were mortared together with asphalt or slime. A tower took shape. This structure, they supposed, would reach the heavens and provide for them an identity, for they said, “Let us make a name for ourselves” (see Genesis 11:4).

Man Out of Order

Here again, we see the efforts of men who have put themselves out of God’s order. The Lord told Noah and his sons to “Be fruitful and multiply, and fill the earth” (Genesis 9:1). The instruction was part of the blessing put upon the lone family of eight that had been spared the destruction wrought by God’s Flood.

Just a couple generations removed from the Ark, Noah’s descendants, which includes us if you accept the Bible’s account of how things came to be, confined themselves to Shinar. Everyone, it seems, became part of a huddled mass in and around the cities of Nimrod.

Genesis 10 describes Nimrod as a “mighty hunter before the Lord.” This was the leader, a man given to the chase and to catching his prey. Crowds easily congregate around the rich, the powerful, the famous, and the fabulous. Nimrod, it seems, had something going for him that magnetized the masses.

We don’t have to stretch our imaginations much to visualize such a personality. Nimrods come along with diabolical frequency. They lead movements and take up thrones; they possess remarkable powers of control and communication. The Hitlers, the Bonapartes, the Jezebels, the Neroes – we read of them and wonder how so many could come under their spells.

Was there any dissent at Shinar? Did any dare to disagree with the program? Was there a voice crying out in the plain? Did someone come from out of the wilderness?

Before the Flood, there existed a confederation of violence and destruction – every thought of men’s hearts was only evil continually. This spirit had so dominated the planet that the Lord saw need to wash it. In Nimrod, oneness of ambition and empty spiritual pursuit ruled the age. This time God would employ a different method to change things.

People groups came together through the ears. Listening became paramount; there was a seeking after those who spoke as you spoke. The earth was filled as the groups multiplied and moved.

God introduced the principle of the certain sound.

Our present “Babel” features its own set of words and concepts – toleration, inclusion, safe, acceptance, choice. The move is on to marginalize the Bible-based worldview as bigoted and exclusive. Soon, one language spoken in the one spirit of the age shall dominate, as it has in various parts of the world at different times. The Nazi era of Germany and the Soviet season in Eastern Europe testify to this.

Present culture has bricked together a structure of concepts that claims to lead upward, toward the heavens. It is a deception.

God came with the answer. Christ has lived, died, resurrected, and ascended to Heaven. Jesus brought the Word, and this was powerful and sharp and divisive in the best of ways. It slices through the atmosphere to expose the false from what’s true. And, He sent the Holy Spirit to guide us into all Truth.

Once again, the Lord’s work pushes people to train their ears. They have to listen for the certain sound, the words of life spoken in humility pointing us to freedom.

Do we hear these words? They are there, as they have been since Pentecost, as mentioned in Acts 2. The rushing wind of the Spirit fills believers to speak in love, to deliver the Gospel message that calls all to turn to Christ.

Let’s listen to the still, small voice of the Lord. And, let’s speak for Him, for His Word never returns void.

For more on these thoughts, listen to “Humility, Great Grace and Conversion,” a message from Thomas Schaller, Pastor of Greater Grace Church in Baltimore.

Listen for the certain sound, the words of life spoken in humility pointing us to freedom. Click To Tweet