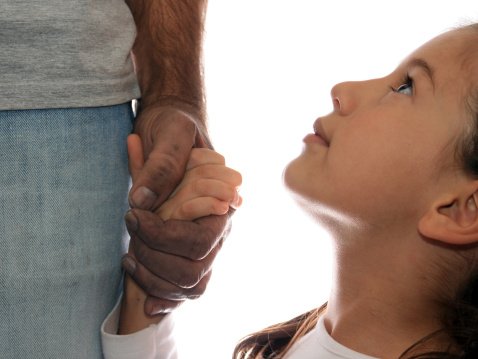 We are “children of promise”, sealed with “the Holy Spirit of promise”.

The Bible calls us “children of promise, as Isaac was” (Gal.4:28) and  says that Abraham is our father (Rom.4:1), “the father of all those who believe” (Rom.4:11, emphasis mine).  It also declares that we, as adopted sons,  are “sealed with the Holy Spirit of promise” (Eph.1:5,13).  Jesus told the Pharisees that they were indeed descendants of Abraham but not his children;  if they were, they would do the works of Abraham (John 8:37,39).  And what were those works?    Believing God (Gen.15:6;  John 6:28,29), trusting Him despite sight, reason, or feelings (Gen.22).  It’s beautiful what the Word of God says about the father our faith, who “did not weaken in faith when he considered the … impotence of his own body …, or the barrenness of Sarah’s … womb.  No unbelief or distrust made him waver …concerning the promise of God, but he grew strong and was empowered by faith as he gave praise and glory to God, fully satisfied and assured that God was able and mighty to keep His Word and to do what He had promised.” (Rom.4:19-26, Amplified)

” … Know God so intimately that you can go to Him with everything.” (Pastor Carl H.Stevens)

If we are to live by faith, embracing the promises of God, there are two important factors involved:  (1)  knowing and trusting the character and integrity of the One Who promised;  and (2)  knowing and trusting the quality of the promises.  First, let’s consider the Promiser.  He cannot lie (Num.23:19;  Titus 1:2;  Heb.6:18).  “He Who promised is reliable and faithful to His Word: (Heb.10:23b).  Furthermore, He was so determined that we, the heirs of promise, would know “the immutability of His counsel” that He confirmed the promise to Abraham with an oath, which silences all arguments regarding His faithfulness to do what He promised.  This He did “that we might all have strong consolation …” (Heb.6: 16-18) and confidence to “draw near with a true heart in full assurance of faith … and to hold fast the confession of our faith without wavering … ” (Heb.10:22,23a).  Just think of His dealings with the people of Israel, who were constantly complaining in the wilderness on their way to the Promised Land.  Yes, He chastened them;  yes, He gave severe penalties for rebelling against Him, His words, His leaders.  But … He always “remembered His holy promise, and Abraham His servant.”, and His covenant with them (Psa.105:8-10,42).  Indeed, He will remember His promise forever and has imprinted it on His Mind (Psa.111:5b).

God longs for His people to trust that He is right and to take Him at His Word, stepping out on it in faith - and then be blessed. Click To Tweet

Couched in passages such as Malachi 3:10-11, Isaiah 1:18, and Deuteronomy 30:19, we see the Heart of this faithful, promising God.  He wants us to step out on His promises and test them,  proving the integrity of the One Who promised.  So, we tithe by faith and He abundantly blesses our provision so that we can’t contain it!  We respond to His invitation in Isaiah 1:18, “Come now, and let us reason together …”, and we make a choice to either trust His redemptive Nature and obey His Word, or refuse His invitation and rebel against His Word and His Mercy.  His mouth has spoken the consequences of both.  Likewise, in Deut.30:19, God offers Israel two options, then pleads with them to choose “life and blessing” rather than “death and cursing”.  The word “reason” in Hebrew is yakech, whose primary root means “to be right”.  It also carries the meaning of “to debate, argue, judge, maintain together”.  God longed for His people to trust that He was right and thus to take Him at His Word and step out on it in faith – and be blessed.

It is unquestionably safe, then, to trust the Words of One with such unquestionable character.  His integrity supports everyone He has ever thought or spoken:  “the Word of the Lord is right, and all His work is done in faithfulness.” (Psa.33:4)  He has even guaranteed rest to His people “according to all that He has promised.”, promising that “There has not failed one of all His good promises …” (I Kings 8:56).  In fact, in verse 57 of this passage, Solomon goes on to pray for things that we as the Church now possess as fulfilled promises made then by the Lord Himself:  “I will never, no never, leave you or forsake you.” (Heb.13:5)  How clear it is that “the words and promises of the Lord are pure words, like silver refined in an earthen furnace, purified seven times over.” (Psa.12:6).  Proverbs 30:5a confirms this:  “Every word of God is tried and purified: …”.  Furthermore, David declares in verse 7 of Psalm 12 that “You will keep them and preserve [Your words and promises] and preserve them, O Lord:  You will guard and keep us from this evil generation forever.”  In other words, the Lord’s keeping and fulfilling of His promises are associated with the keeping of us from evil!

Do these truths not stir us up to receive and believe all the promises of God we possibly can?  Pastor Love recently said, “Always revert back to the promises.”  But what if they are not hid in my heart to revert back to?  Simple, sound wisdom expressed by Pastor Stevens some years ago:  “The more you read the Scriptures, the more promises you have to stand on.”  And of course, coupled with that is coming together all the more in these days to hear what the Spirit wants to say to the Church, and to us individually (Heb.10:25;  Rev.2,3).  We can trust Him that when He sends His Word, it’s to heal and deliver us (Psa.107:20).  ” … ALL [emphasis mine] the promises of God in [Jesus Christ] are Yes, and in Him Amen, to the glory of God through us.” (II Cor.1:20)  So not only are we benefited by hearing and acting upon God’s promises but also He receives glory – through us!  And that’s not all …

Know what?  The song ends this imperative with “that the King is in residence there [in our hearts].”  But how does the world see that?  by our taking God’s promises, believing them, launching out on them, to the praise and the glory of His Grace, which He Who promised always reveals as He fulfills His promises.

David reasoned with the Lord to give glory to His Name and not to us, for “Why should the nations say, Where is now their God?” (Psa.115:1,2)  So many times in the Scriptures we see “for Your Name’s sake” – e.g., “He saved them for His Name’s sake, that He might make His mighty power known.” (Psa.106:8).  Then remember Moses appeasing God’s wrath toward the Israelites, after they’d fashioned the golden calf and begun to worship it.  He, too, reasoned with God, urging Him to not destroy His people, for “Why should the Egyptians say, For evil He brought them forth … to consume them from the face of the earth? … [R]emember Abraham, Isaac, and Israel … to whom You swore by the heavens, [that] all this land that I have spoken of will I give to your seed, and they shall inherit it forever.  Then the Lord turned from the evil He had thought to do to HIs people.” (Ex.32:12-14)   Imagine:  one man, so confident in God’s integrity behind His words that he had the courage to say, “But Lord, You promised!”

Let us do likewise.