Love As You Have Been Loved 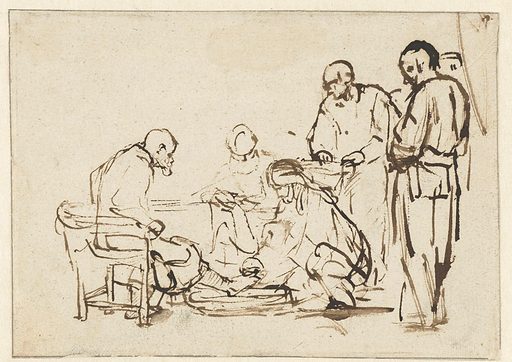 The supper ended. Jesus rose from the table and proceeded to shock everyone in the room.

The Apostles were stunned as their Master donned the garb of a household servant. He now wore a towel around His waist. He carried a basin full of fresh water. He bowed before each of these men and washed the feet of every one there – even Judas was served in this fashion.

Think of this:  the traitor was a given a clean up before he entered into the final stages of betrayal. Jesus helped to prepare one of the devil’s tools for the diabolical tasks ahead of him.

What does this say to me? It tells me that even Judas was loved by God the Son. This was the last bit of Heaven that this man tasted. Very soon, Judas would go out of the room and into the dark, away from the communion of the saints. He would not be on hand to hear Jesus’ poignant and powerful talk at beginning of John 13.

This discourse in the Upper Room represents a kind of Deuteronomy moment for the closest followers of the Son. As Moses readied to depart this earth, he made a series of speeches to the people of Israel to prepare them for their days in the Promised Land and beyond. Those speeches reiterated all the things that the Lord had told him to communicate to the tribes and these speeches are contained in the fifth book of our Bibles.

Likewise, this series of chapters in the gospel of John feature Jesus giving His commands. The hearers were told to love and to pray and to expect. He was going to the Cross, to the Tomb and out of it, and soon thereafter He would go His Throne on high.

First, the Son provided a lasting object lesson for this bewildered bunch. The Hands that healed lepers and blind eyes, the Hands that broke the bread and passed the cup, the Hands that took the nails, these very Hands poured the water, held the towel, and so cleaned toes and heels and ankles befouled by dirt and dung.

“How beautiful are the feet of them who preach the Gospel of peace. …” These words Paul wrote in Romans 10:15, quoting from Isaiah 52. And it was the service of the Son that beautified these feet in the first place.

Jesus answered our murmurs and failures with His Presence. He stooped so low, low enough to be born as an infant, low enough to clean feet. Click To Tweet

The Savior came to minister, not to be ministered unto. By this mode of operation, the Son gained ultimate glory and eternal, incomprehensible majesty – even to the devil, a creature supernaturally equipped and positioned like no other.

Again, let me reference the book of Job. There, we read of Satan’s despite for a holy man. He was given access to all that belonged to this man. Hell raged at Job. The man staggered and mumbled and shouted to Heaven, but he kept seeking his Redeemer, even in the face of poor counsel from his wife and his friends. This was his integrity, and he refused to let it go. And God honored Job with the answer of His Presence.

Jesus answered our murmurs and failures with His Presence. He stooped so low, low enough to be born as an infant, low enough to clean feet. In doing this, He honored His Creation and opened the way for believers to live for God.

A Little While with Little Children

The exit of Judas shifted the dynamic of the evening. “When he had gone out, Jesus said, ‘Now is the Son of Man glorified, and God is glorified in Him’” (John 13:31).

Could the story of Jesus and His exaltation get any more curious? He became a foot-washer, and then sent off His betrayer, telling Judas to do his deed with due speed.

“Now is the Son of Man glorified,” He announced. At this point, Jesus began His master class of preparation with these words:  “Little children, I am with you a little while longer. …” (John 13:33).

What came about in that “little while”? Why, only the most significant moments in human history.

The Cross and all the sorrows associated with it was just hours away. That Friday would happen; its riotous and violent darkness brought a sunset and a Sabbath of sadness and hopelessness.

Oh, but then there would be the Sunday of all Sundays — Resurrection Day! His appearances would continue. Those chosen witnesses would take in all that He did and said until He rose to His place at the right hand of the Father. And then power was to fall on His people to tell the news, the Gospel, everywhere.

All of this was coming for them. With these ones, Jesus began to build His Church.

As the Apostles and the other disciples went forward, I have to believe that they often spoke of those hours in the Upper Room.

“Little children” He called them, for they still had so, so much to learn. Jesus began with the most imperative of declarations:  “A new commandment I give to you. …”

The Son laid down a new law for life, a law established by the life He had laid down and taken up again. The commandment He gave was just this:  “Love one another:  just as I have loved you, you also are to love one another” (John 13:34).

All that the Savior proceeded to say on this evening built upon this first rule. For all the tools and methods of evangelism that have been crafted and expounded, this one truth has remained inescapably central to the success of the Church – love and others will notice.

The Helper Sent to Us

“Love one another. By this, all people will know that you are my disciples, if you have love for one another.”

And how did Jesus show His first love to them on this night? By washing their feet, that’s how.

This means that our love is best shown by cleaning up our brothers and sisters after they have stepped in the messes and disasters of life. We have to help fallen ones out the ditches and lift them out of their pitfalls because this is what love does. “Brothers, if anyone is caught in any transgression, you who are spiritual should restore him in a spirit of gentleness.” This is the instruction Paul wrote in Galatians 6:1.

We are still such little children, and what is it that we must really learn? To love one another. Start with the members of the Body of Christ. Our care and forgiveness for each other is the salt and light our world so needs.

How can we do this when we are so desperately human? Jesus provided the answer to this question a little later in His talk with these little children:  “… the Helper, the Holy Spirit, whom the Father will send in My name, He will teach you all things and bring to your remembrance all that I have said to you” (John 14:26).

The love of God is shed in our hearts by Him who first loved us.