Mary Got a Song to Sing 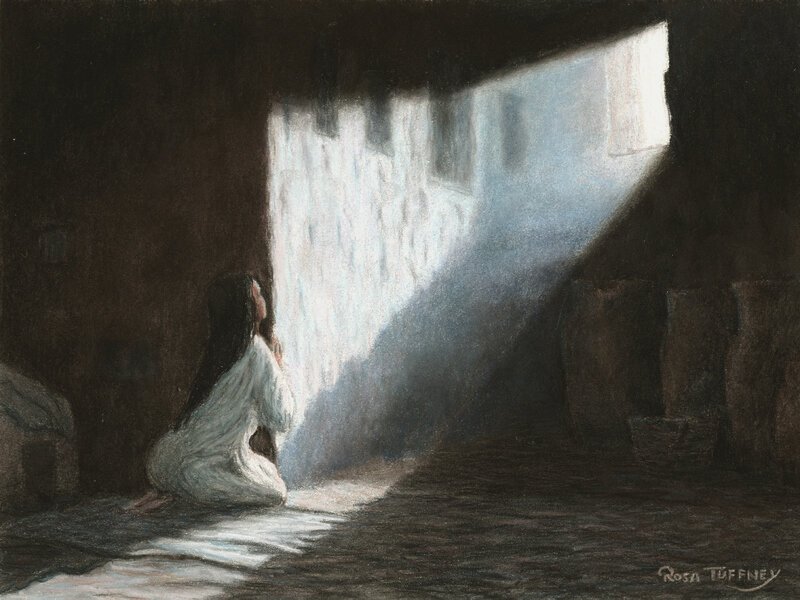 It was an ordinary day in a hardscrabble town situated in northern Judea. And then the extraordinary happened to a seemingly simple girl who had grown up in Nazareth, a village of about 400 residents.

The place featured a collection of committed Jews by all accounts. That is, the families there strived to unfailingly follow the Law of Moses. And small towns being what they are, everyone knew everyone in every way.

These details should serve to make what happened to Mary all the more remarkable. The story of Jesus, the Son of God on earth, begins in that small town with this young girl.

Gabriel arrived with a message for her from Heaven. He announced himself with a strange sentence to the ears of this daughter, one promised in marriage to the town carpenter, Joseph.

“Greetings, O favored one, the Lord is with you.”

The words and the angelic presence staggered Mary, just a teenager then. She, for sure, had never heard such a salutation before.

Just what could this mean? Gabriel was about to tell her. This angel was experienced in encounters with surprised humans. His role as one of the Lord’s primary messengers is first revealed to us in the book of Daniel.

The prophet, a captive Jew, dream interpreter, and wise counselor in the service of the kings of the Babylonian and Medo-Persian empires, had seen visions most difficult to decipher and ones that proved frightening to his tender heart.

Gabriel explained the progression of human governments represented in Daniel’s vision of the Ram and the Goat in Daniel 8. It was something that referred to the distant future and all of it left the prophet dazed and confused.

And so Daniel gave himself to prayer, for himself and his nation. Again, Gabriel is sent to lead Daniel in understanding the times of the end. By the end of this Old Testament book, this prophet was simply told:  “Go your way, Daniel, for the words are shut up and sealed until the time of the end” (Daniel 12:9).

The future things that the angel defined for Daniel are only possible now because of Mary’s willing heart.

Bright and beautiful Gabriel, a being who stood as an attendant and messenger in the presence of the Throne of Heaven, was now standing before a poor peasant. He brought astonishing words and a request.

Yes, Mary had a choice. This mission would not be forced upon her any more than Abraham was forced to leave Ur of the Chaldees or take Isaac to Mount Moriah to make an offering of him. Decisions had to be made.

Only months before, Mary’s cousin Elizabeth, old and barren though she was, experienced a miraculous conception. Gabriel was part of that scene, too. This angel met Elizabeth’s husband, Zacharias, as he offered incense in the Temple. Gabriel told him that he would father the promised forerunner, the one born to prepare the world for the coming of the Messiah.

Zacharias, old and skeptical as he was, dismissed the suggestion. His faith had sunk so low, his spirit so negative, that the angel pushed the mute button on him. This priest would speak nothing until the words brought by Gabriel were accomplished.

Yes, Mary had a choice. This mission would not be forced upon her any more than Abraham was forced to leave Ur of the Chaldees or take Isaac to Mount Moriah to make an offering of him. Decisions had to be made. Click To Tweet

However, Zacharias did go home to Elizabeth. And he did sleep with his wife. In the course of time, John the Baptist was conceived.

Gabriel related this story to Mary, and her faith rose to the occasion. She heard the angel and believed the impossible could happen in her, a virgin.  And she would allow it to happen. The Son of God as the Word Made Flesh would have a way of entry into our world.

“And Mary said, ‘Behold, I am the servant of the Lord; let it be to me according to your word.’”

Mary surrendered to the purpose of God. She was favored; that’s what Gabriel told her. And yet her life from this point forward would be full of much that can only be called unfavorable.

“Let it be to me according to your word.”

This favored girl endured a trashed reputation in her community. The scandal of her pregnancy and its timing were whispered as water was drawn from the village well. Her story spread to other parts of the region and even to the religious leaders. We know this for Jesus was scorned by Pharisees who labeled Him as a child of fornication (see John 8:41).

Think of all Mary had to endure. Imagine those first days after the conception. How did she feel? What manner and tone were present when she had to explain her state to Joseph? We read that Joseph refused to make a spectacle of Mary, but as a most merciful man, he was ready to annul their marriage contract in a private manner. And then the Lord spoke to him in a dream — another miracle happening that led him to claim her as his bride in spite of it all.

An Answer for the Troubles

The Life growing within Mary was Holy, Holy, Holy, but on the outside she moved in an atmosphere ruled by evil and driven by lies; evil and lies that would put the Son on the Cross.  How was she to stand against the oppression and opposition leveled against her and the Son she bore?

Luke 1 gives us something of an answer. God gave Mary a song. She got a hymn she could sing in the seasons of night that would come to her.

Her soul was surely much disquieted at times, just as her ancestor David’s soul had been disquieted, according to Psalms 42 and 43. So I imagine Mary learning to sing in her troubles as the king of Israel sang in his.

She sang words that magnified the Savior whom she carried. This Baby would bleed one day for her sins and for the sins of all. She sang a proclamation of the greatness of the Lord. Her spirit exalted in God.

Her lowliness and trials were seen and known by the One who made and called her. She was never alone in the holy endeavor she’d been made a big part of.

Like the virtuous woman described in Proverbs,  Mary rejoiced — laughed even — at the thought of things to come (see Proverbs 31:25) . The great things that God would do fill her song.

Mary sang of the proud who were destined to be scattered and the mighty oppressors who would be cast off their thrones. The humbled would be lifted and the hungry made full.

These things would be accomplished by the Son of the Most High — her Son.

Yes, the Son of God and the Son of Mary – this is Jesus. Once conceived in her, He was and is, always and forever, both of these things. He was sent in mercy to bring liberty to those bound by the bonds of sins.

Yes, the Son of God and the Son of Mary – this is Jesus. Once conceived in her, He was and is, always and forever, both of these things. He was sent in mercy to bring liberty to those bound by the bonds of sins. Click To Tweet

And this mercy of His would reach from age to age, from generation to generation, as declared by this daughter of Nazareth.

And so it has.

Mary sang out these praises as Elizabeth listened. John the Baptist heard and danced in the Spirit.

Can God give us a song like He gave Mary her song?

The Psalms tell us that this is His way with us. We are encouraged to seek Him for our songs. The Hebrew word for “new” —chadash— refers to something that is fresh. There you have it. God gives fresh hymns and spiritual tunes to those set on praising His Name, as Mary was.

Let us lift our voices with words from Psalm 149:1:

Praise the Lord! Sing to the Lord a new song, His praise in the assembly of the godly!