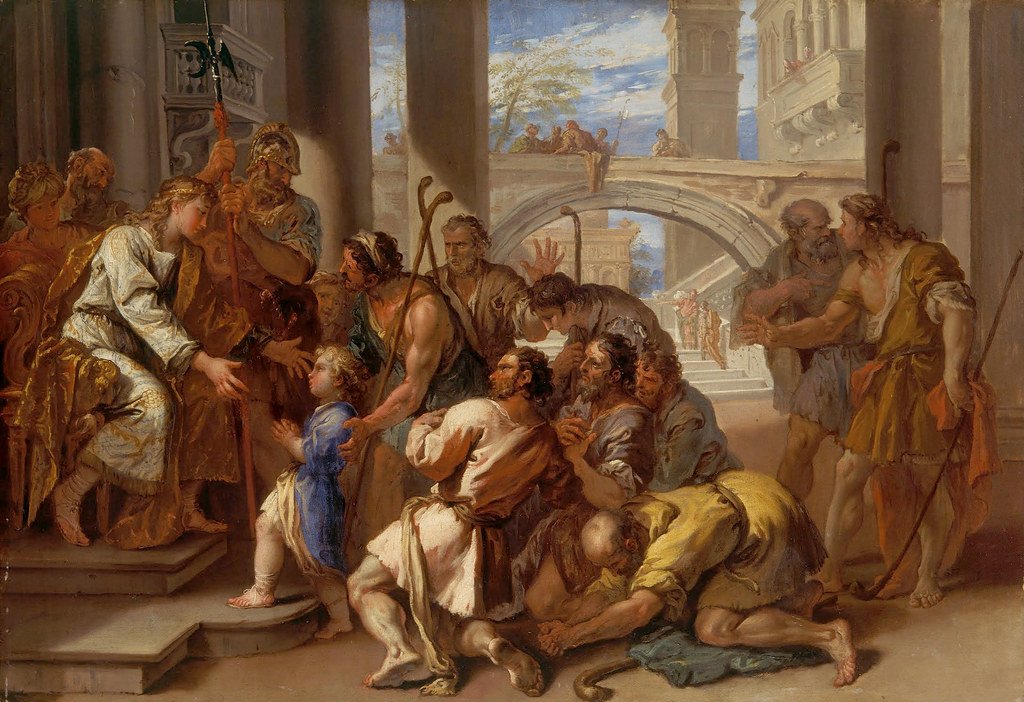 It was Joseph who said these words in the book of Genesis. After more than a decade, he finally came face to face with the brothers who had cast him into a pit and turned him into a slave. They thought to kill Joseph, but then decided to sell him to a band of human traffickers, a gang of Ishmaelites. These traveling profiteers offloaded this 17-year-old in Egypt.

Along the way, however, Joseph became a most effective administrator and visionary. He was a dreamer and also a reader of dreams.

Joseph’s enslavement was the beginning of many troubles thrown at him. He was lied about, falsely accused of sexual assault by the wife of his master. The accusation landed Joseph in prison, where he again showed his skills as an organizer and leader with integrity

Much befell this young man. His sufferings surely wearied him. Listen with your imagination and I think you should be able to hear him cry out, “My God, why have you forsaken me.”

The Lord, at last, remembered Joseph. The prisoner solved the riddle that came to Egypt’s pharaoh in his sleep. His interpretation left such an impression that Joseph was elevated to chief counselor of the Empire. By the wisdom God gave him, Joseph prepared Egypt for a terrible natural disaster that was soon to come.

Joseph had earned a position in the palace. Soon, he was given a wife from one of the nation’s holy families and they would have two sons.

The famine made its arrival. It was a grievous event that touched the whole region. All manner of peoples were coming to Egypt, for there they could find grain. Joseph guided a storage operation during the plentiful harvests that preceded the dearth and, thus, none would have to starve.

And then came his brothers. Hungry men sent by a hungry household to buy grain so that they could make bread. Jacob, their father and Joseph’s father, worried for his family as the fierce famine dragged on.

The Brothers before Joseph

The tortures that plagued the hearts of the brothers revealed themselves even as Joseph showed them mercy. He posed questions, inferring that they were spies. He took another brother from them and watched their reactions. And then he made sure that got their money back. They were confounded and confused. These things pushed the brothers toward an understanding of the pain they had visited upon Joseph. These fears, to me, marked a beginning of wisdom for the brothers.

All of this, I believe, was in the design of God. A process of repentance was underway. They were shaken. They remembered the day the sent their brother away. They recalled the anguish on him. The scene of that slave trade seemed to have never left them.

This is the snare of sin. It is the pit that we fall into, it is the stone that rolls back upon ourselves.

Fyodor Dostoevsky’s Crime and Punishment is one of those classic novels that many were made to read in high school. The author wrote the book in a series of installments published in a Russian literary journal. Throughout the pages, Dostoevsky presents characters as they wrestle with psychological and emotional weight that’s brought to bear on those who commit crimes.

The human spirit and the conscience are tools of God. The spirit, the proverb says, is the candle of the Lord. It shines into the concerns of our hearts. It reveals what lies amid the shadows that have cast themselves upon us.

The sin of Joseph’s brothers found them out every day I believe. And, now in Egypt, they sensed that they were near getting their due for what they had done.

A Brother Born for Adversity

Joseph did say this, and this would be a tragic sentence if that it is where it ended. Thankfully, there’s more to this account.

“… You meant evil against me, but God meant it for good, to bring it about that many people should be kept alive, as they are today” (Genesis 50:20).

Mercy was given space in Joseph to rejoice against judgment. A man most grievously mistreated manifested forgiveness. Again, listen closely and your imagination should let you hear Jesus from the Cross again:  “Father, forgive them for they know not what they do.”

What kept Joseph from allowing bitterness to root itself in him? He came to see the hand of God at work.

“God meant it for good.”

That was the answer for the evil done to him. An impossible attitude to possess in ourselves, for sure, but the Holy Spirit sheds His love abroad in us.

Forgiveness brings release and neutralizes the power of evil from dominating us. The hand of God at work in me is the same hand at work in others.

Paul was a brutal enemy of the early church. He hurt many believers. He cheered on the stoning of Stephen. Inside him, however, a great struggle was going on. God turned His light on this persecutor and rescued him from himself.

God is well able to do above what we could ask or think (see Ephesians 3:20). Vengeance belongs to Him and to Him alone. I am sure many thought Paul deserved to be struck down. The Lord had another idea altogether.

By a wicked intention, Joseph was sent ahead of his brothers, his father Jacob, and all the rest of his family. He was appointed and anointed to rescue them from themselves.

“God meant it for good.”

What a world this would be if those words were taken out of the context of the situation. Where would that leave us? We would find ourselves in world full of biters and devourers. Perhaps, we are getting closer and closer to having a world like this.

Where is mercy? Where is forgiveness? Where is love?

May we learn to bear being wronged. Not that the wrongs might be excused, but rather that God might use them to bring about salvation, redemption, recovery, and rejoicing.