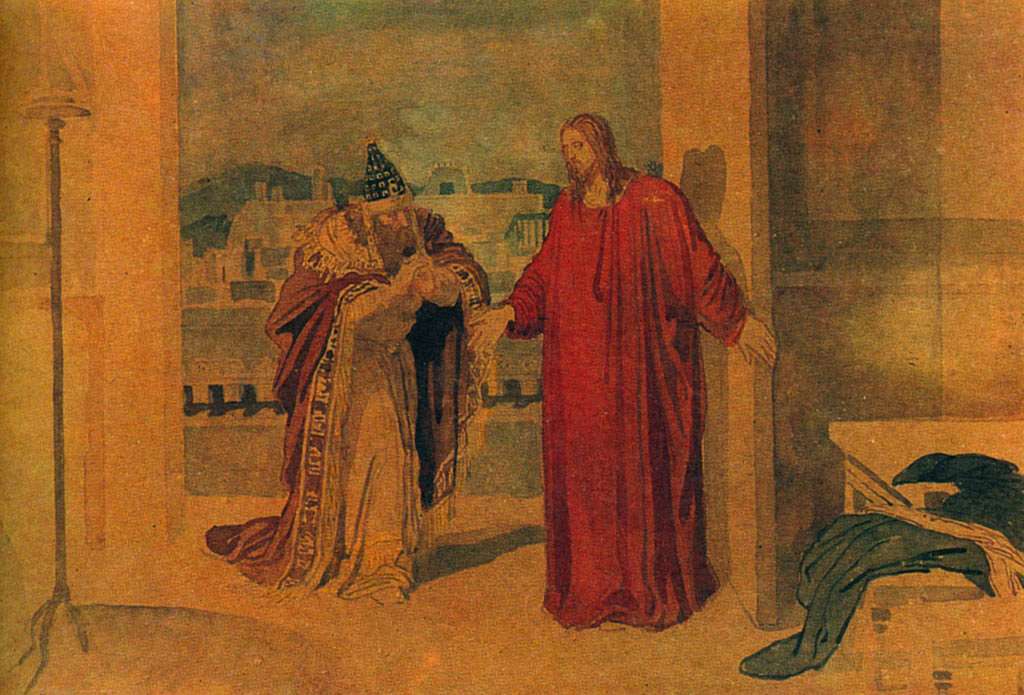 Meeting Jesus, the gospel of John is all about this. The pages are full of encounters with the Son of God as He walked among people in towns and villages and wildernesses.

Let’s take a look at a couple of these early meetings that the writer of this gospel describes for us.

John 3 features the story of Nicodemus and John 4 presents to us the woman at the well. Two people from very, very different situations got audiences with Christ.

Nicodemus was a religious leader, a teacher, an intellectual who came to seek out Jesus in the dark. Sneaking about in the night to have a conversation with the Rabbi? Seems like a cowardly approach.

I think the thing that really matters is that Nicodemus did come. And Jesus did receive him and speak to him directly and forcefully.

This man sat as a member of the Sanhedrin, a council that served to manage the religious and social life of the Jewish community in Judea.  His station in life was secure, as secure as any could hope to be in the days of Roman rule. He surely had money and status. He got greetings and salutations whenever he was out and about – in the square, in the Temple compound, at the market — if ever he had to go to the market, that is.

By sight, Nicodemus had a lot to lose. Being seen with Jesus would have stirred suspicion.

His approach to Jesus is rendered even more surprising if you take into account what Paul wrote to the Corinthians:  “For consider your calling, brothers: not many of you were wise according to worldly standards, not many were powerful, not many were of noble birth” (1 Corinthians 1:26).

A wise man saw the limits of his wisdom and purposed to exercise himself in the fear of the Lord, however timidly it seems on the surface. Read how Nicodemus opened his inquiry to the Lord:  “Rabbi, we know that you are a teacher come from God, for no one can do these signs that you do unless God is with him” (John 3:2).

He views Jesus as One who came from God. That’s a big admission for a scholar of his stature. Could it be that Nicodemus saw the Son as John had introduced Him, as “the Word made flesh” in John 1? Or, was this just a way to flatter the Teacher who had piqued his curiosity?

The Savior refused to linger over formalities. Instead, He took aim and addressed the primary issue facing this man. Jesus answered him, “Truly, truly, I say to you, unless one is born again, he cannot see the Kingdom of God” (John 3:3).

“Born again” – the words are critical to our understanding of the Christian faith. A birth of the Spirit, sent from above, is necessary to know the Truth and to have the Truth set us free. For all Nicodemus’ learning, there remained this gap in his understanding of the God who commands all to “be holy as He is holy” (see Leviticus 11:44 and 1 Peter 1:16).

“Unless one is born again …” – the phrase staggered Nicodemus who slipped right into a natural mode of thinking as he wondered aloud about how he would return to his mother’s womb.

The conversation went on and included some of the most significant statements of faith. Jesus spoke of the Spirit’s coming as being like the wind. A gust comes and its origin cannot be traced out and yet its effects can be felt and seen.

The King had come suddenly, out of a nowhere place known as Nazareth of Galilee. He showed up and brought words of authority, words that delivered and gave life. Nicodemus felt the move of God and had to find out more.

“How can these things be?” Nicodemus wondered. And so the Son told it to him straight.

Jesus delivered a rapid and compact explanation of Himself and His mission. If Nicodemus was paying attention, and I believe that he was, he learned that this Rabbi came from Heaven to be lifted up on the Cross to reveal the immeasurable love that God has for the world. Those who believe in Him, the Only Son of God, Jesus said, shall escape death and receive eternal life. In a few sentences, the Gospel message was encapsulated for a man who had spent years in the scrolls of the Law and Prophets.

There in the dark, the Light shined out from Christ to Nicodemus. A thinking man was left with a lot to think about.

We will return to Nicodemus, but let’s look at the next person who came to face Jesus.

In John 4, a woman was found by Jesus when the sun was high in the sky. He sat down by a well of water near Sychar in Samaria, a territory where Jews generally refused to set foot. Prejudices and self-righteousness ruled their thoughts and actions toward the members of this partly Israelite people group.

When the woman came in the heart of the day, an unusual time, to fetch water, Jesus asked her for a drink. The suggestion irked her, who knew Him to be a Jew and was likely annoyed at His request. She was also full of guilt and in haste to get her water before anyone else saw her.

This woman would have been ignored by a man of Nicodemus’ standing. She was a Samaritan with a tortured and scandalous history. She’d been married five times and was now with another man who was not her husband.

Jesus, however, offered her the water of life. He spoke to her of being born again in another way. Receive the water from Heaven and never thirst again. She grew curious and jumped at the chance to accept the offer.

And then Jesus told her all about herself. Like Nicodemus, she was stunned and pronounced Him to be a prophet. He spoke to her plainly and revealed the key to loving the Lord:  “God is spirit, and those who worship Him must worship in spirit and truth” (John 4:24).

This woman knew a few things, too. She said her Samaritan relatives expected the Messiah, as the Jews did. They awaited the One who would tell them all things.

“I who speak to you am He.” Jesus announced this, and her heart broke open with faith and love. She ran to town to tell of Him. The Light broke through to her and she had to shout all about it. A two-day revival meeting came about as the result of her testimony.

“And many more believed because of [Jesus’} word. They said to the woman, ‘It is no longer because of what you said that we believe, for we have heard for ourselves, and we know that this is indeed the Savior of the world’” (John 4:41-42).

Nicodemus could not bring himself to respond as the Samaritan woman did. His faith could not leap forth in praise as it did from the woman at the well. His faith was still and small; steady but real, a thread of hope.

How do I know this? Because of what is revealed about Nicodemus at the end of John’s gospel. He’s there at the Cross, where Jesus had been lifted up. Many of the Lord’s visible disciples ran into hiding.

Nicodemus came to wrap and prepare the body of Jesus for burial with Joseph of Arimathea, another secret disciple and religious leader. He watched as Christ was laid behind the stone in the garden tomb.

Whatever way we come to Jesus, He is there to show us the Light. He takes us as we are and leads us to be what we are to be. Click To Tweet

Whatever way we come to Jesus, He is there to show us the Light. He takes us as we are and leads us to be what we are to be. Are you the quiet type? Don’t beat yourself up about it. Go to Jesus.

Do you have a strange and troubled history? Open yourself to Him. He is seated right there with you. He is just waiting to be gracious.

The whole truth of the Savior is contained in this:  “And it shall come to pass that everyone who calls upon the name of the Lord shall be saved” (Acts 2:21).