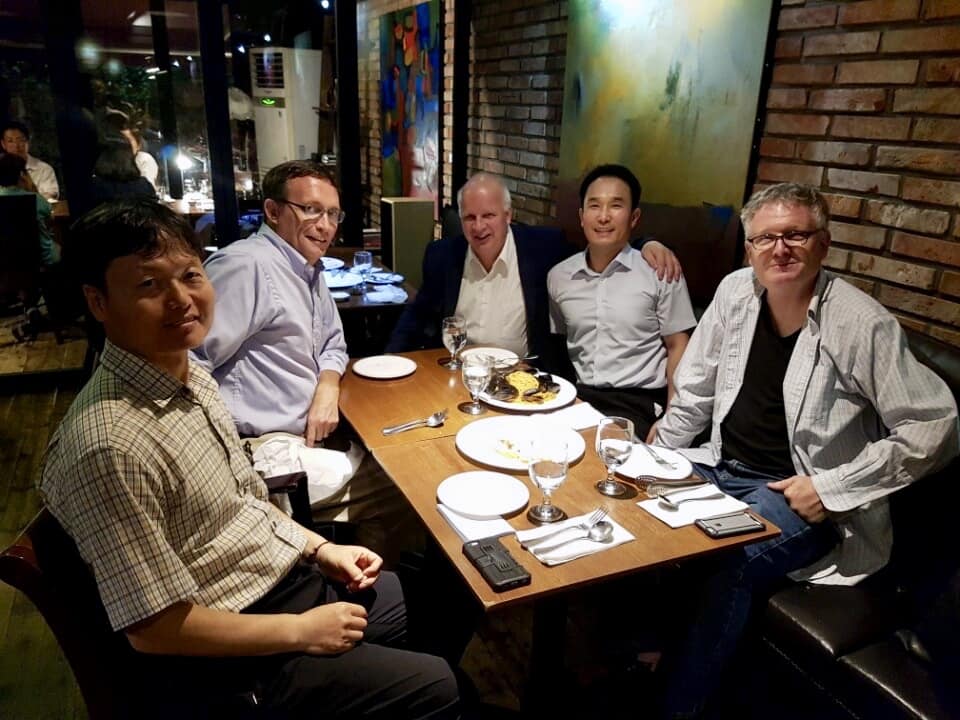 The first major event of July was the BIG MOVE. Our Grace Mission Church signed the papers on the Missions Center, a.k.a. the new apartment where I will be living along with Pastor DeVries, Pastor Sejun, Tain Palanun, and any other men (or married couples) who are i n Seoul to edify our church. Since Pastor DeVries, Tain, and Pastor Sejun are away more often than they are here (for now), the apartment has one occupant most of the time – me. I am a blessed man.
On the day we got the key to the apartment, we inspected it and determined it needed professional cleaning, new wallpaper, and new lighting and other fixtures before moving day. The workers accomplished these tasks quickly, and on a rainy Friday morning, the moving trucks arrived. I supervised what furniture would go into the apartment and what would remain outside for later disposal. We were moving from a larger space into a smaller one and had to downsize.

That night Pastor Sejun and I slept in our owns bed again. The next day, Tain arrived and within days Pastor Steve arrived and all three bedrooms and the living room were full. When Pastor Matti Sirvio arrived later in the week, we truly had a men’s mission center dormitory.

Pastor Matti arrived with his luggage and some of his paintings. Not only would he be the featured speaker at our annual East Asia Conference, but he would also be having an art exhibition in Seoul. I was honored to help him with a few details. I enjoyed getting to know Pastor Matti better, and he encouraged me a lot.

Along with our Finnish speaker, guests from China, Japan, Thailand, and America blessed our conference with their presence. Our theme was “Behold, I Make All Things New.” Pastor DeVries spoke about the difference between kainos and neos newness. Pastor Matti spoke about the slow but steady work of our caring God in our lives. A rap session followed each meeting. Communion, worship, and healing service times were special.

Moving on to Japan Singing in Japanese in the Yokohama subway station Returning from the conference, Pastor DeVries and I had time to do laundry, squeeze in a Sunday service, and exchange some money before heading to the airport to fly to Japan Tuesday morning. It is a tradition to follow our summer conference with a summer harvest missions trip. This year the plan was to co-labor with Tom and Nataliya Chung in Yokohama for a week and then head to Fukuoka to evangelize and edify.

The humidity in Japan was high since typhoon season was upon us, but we went out daily to sing in the subway and hand out invitations to our five weekend meetings. We met in a little jazz club with magenta lighting, but the glory of the Lord filled the place. We had Chinese brothers and sisters with us helping and they were a great blessing. Pray for a new work of God to start in Yokohama.

I returned to Korea while the rest of the team moved on to Fukuoka. One day I ran into a former student from the Yeomyung School. God ordained this meeting to bless us both. We couldn’t stop laughing and smiling. I’ve finally been here long enough to have a little history with people I’ve taught and ministered to. It made me wonder what other surprises God may have in store for me in the coming year. I’ll be here until the end of September then coming to America for my niece’s wedding and a quick trip to Baltimore. I hope to see many of you then. — Dan Dunbar