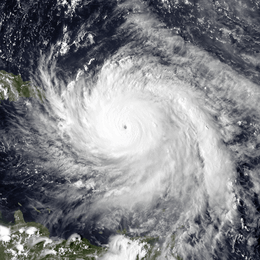 In September, we saw a number of our missionaries and churches caught in natural disasters. Houston, Texas, was hit by Hurricane Harvey.  Mexico City was struck with an  earthquake of 7.1 magnitude. Puerto Rico was devastated by Hurricane Maria.

Our churches and people were kept safe in these places. But they need continual prayer as they minister in the midst of much destruction.

I read something the other night that I don’t ever recall reading or at least I have never read it this way before. Exodus 14:19-20. We may have seen this in our lives before and not understood when it happened.

God, The Angel of The Lord, went before them. At night, He was a pillar of fire, during the day He was a cloud. In Exodus 14:20 we see Him manifested as fire and cloud at the same time: He led them by fire through the Red Sea all night long while being a cloud of darkness and confusion to the Egyptians that were behind them.

Up to this point the pillar of fire had meant stop and rest for the night. Now it meant: get to move on.

Sometimes we get to the place where we expect God to do what He does the same way as always, and when He changes things on us we get upset, when all He is trying to do is to preserve us, protect us, lead us, guide us….. – Pastor Duane George