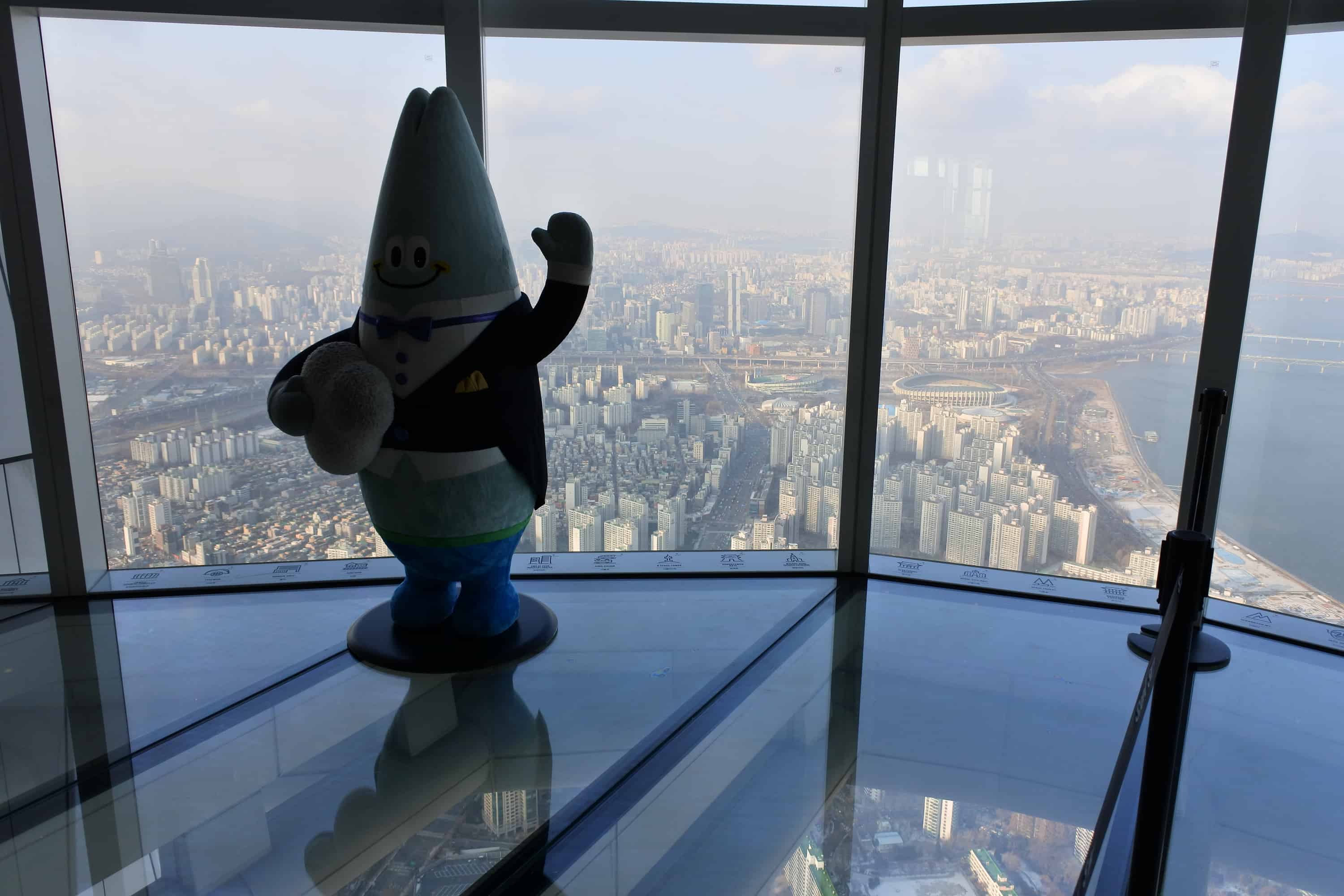 January has given way to February and one-twelfth of 2018 has passed, never to return. As I think back on the past thirty-one days, I try to recall the moments when God may have been glorified in my life. The refrain from C.T. Studd’s poem Only One Life comes to mind:

“Only one life, twill soon be past, Only what’s done for Christ will last.”

January began quietly, ministry-wise. The Bible college was on break until January 15, and Yeomyung School doesn’t begin weekly chapel classes until March 9. That left me with two services a week and the midweek hospital Bible study to cover. What else would I do?

One thing that I am learning as a missionary is that whenever I leave my house, there are opportunities waiting for me. As you can see from the photos on the first page, I made a return visit to the Lotte Seoul Tower, this time to go as high as I could. I wanted to get the higher than bird’s eye view of Seoul.

As soon as I arrived at the elevator, opportunity presented itself in the form of an eccentric Seoulite who had made a millions of dollars in Bitcoin. He spoke little English, but he had a college student with him who went by the English name Brody who acted as his translator, and he invited me to accompany him as part of his three-man entourage as he enthusiastically explored the top floors of the tower.

This man (photo above) spent over $3000 on souvenirs in the gift shop – he bought me the red hat I’m wearing in the photo below – and gave me his business card asking me to contact him by email so that he could take me to dinner when he returned from his trip to Montreal. I helped carry his eighteen bags of souvenirs to his BMW and then went to lunch with Brody.

My very presence in Korea is a source of curiosity for nearly every Korean I meet, especially when they discover that I live here. “What made you decide to move to Korea?” is the usual question, and then I get to tell them how God called me to Korea when I visited in 2013. That I gave up a home, a car, and a job as principal of a school often leaves peo ple wide-eyed with amazement, and this college student was no exception.

Brody proceeded to tell me that his parents were elders in their church, but he and his brothers all stopped attending church as soon as they finished high school. His reason for doing so was that nobody in his church could satisfactorily answer his honest questions about things he finds hard to understand and believe. I gave an answer to one of his questions that he obviously had not heard before, but he wasn’t ready and willing to talk more because he had to leave for an appointment.

I was sad to see him go, sad that no one in his church had answers for him. There are some Christians here that say, “You don’t have to understand, just believe,” when confronted by hard questions they have no answers for, and that also makes me sad.

But my greatest sadness is this: I lost the eccentric Korean man’s business card due to carelessness before I got home, and I didn’t ask for Brody’s contact information so that I could possibly follow up on our conversation. I was so disappointed with myself that night, thinking what a lousy missionary I was that day. I’m still feeling pangs of regret. An opportunity literally slipped through my fingers.

I remembered the name of the university that Brody attended (Yonsei) and his majors (astronomy and mathematics), so I sent an email to one of the professors in the astronomy department in hopes that he would know Brody and pass along my contact information to him. I haven’t heard anything from either the professor or Brody, but I pray and I hope…

Since that day, I have been more careful, more conscious of the doors that God opens for ministry. And I have been reading an excellent missiology book that fellow missionary Mike Colby (Budapest, Hungary) recommended to me titled Ministering in Honor-Shame Cultures. It has broadened my understanding and appreciation of the culture here in Korea. Slowly, slowly I am learning, often being taught by the Koreans themselves, how to minister to the beautiful people God has put into my life.

For example, last week I went and visited a Korean brother named Paul Choi who runs an Italian restaurant in Myeongdong. I hadn’t spent any time with him since November. Why? Because whenever I visit, Paul insists on giving me a free meal, and I didn’t want to show up too often and take advantage of his generosity. I thought he would think, “Oh, here is Dan again looking for another free meal. What a freeloader!”

But it turns out that it is Paul’s honor to be able to share his food, to sit down and eat and talk to me. He said, “I want to come to see you at your church, but time and distance don’t make it possible. My apartment is very small. When you come to my restaurant, it is like you are coming to visit me in the living room of my home. I really want you to come see me and talk with me more often.”

I was very convicted. Humbled and convicted. My pride had kept me from visiting this brother for nearly two months. He had missed me. He had missed our fellowship. I had taken away his opportunity to be a good host, to honor me, and it seems that I had kept him from experiencing the blessing of my portion.

That was a lot harder for me to digest than his delicious food. My showing up to eat and have a spiritual conversation with him was a blessing to him? Truly? Again, I felt regret for all those weeks I had put off going to see him. I plan to visit again soon.

I think there is no magic to being a missionary. We just go and be sure to take care of the treasures God leads into our lives. We also must remember that we have a treasure in our earthen vessels (even if we don’t see it) that makes us valuable to other people.

Please pray that God miraculously gives me another opportunity to meet Brody and the businessman. Thank you. –Dan Dunbar