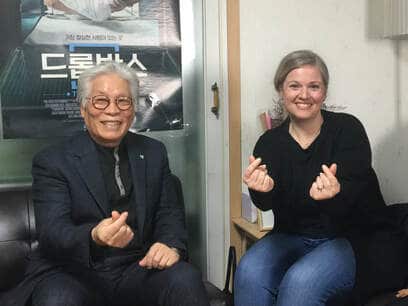 I am sure this will be the hardest chapter to write, not because of the moments or the people involved, but because of the intimate interactions and raw faith that I would like to somehow accurately paint onto this canvas. Please forgive me if I have not been able to capture it all as well as I would like. I will try.

As we sat and spoke around the small table in the warm room, the door opened and some gentlemen walked in.  They were from the Singapore film crew, and had just driven over to the Babybox location to film a part of their documentary.  Someone said that P. Lee was here, and that he would, in fact, be able to come and spend a little time with us. At first, I imagined a room full of people, asking questions, maybe filming, maybe obtuse in working toward their production.  But just the thought of the opportunity to sit and listen to P. Lee in person was enough to warm my heart.

I stood as he entered and was introduced through the buzz of translation and lots of bows.  Two-handed handshakes, repeated bows, the room was full of a tangible respect.  He motioned for us to sit.  The film crew hovered around the small room for a moment (I was a little dazed, and can’t remember exactly how those moments passed), but quickly I found that we were sitting quietly.  Wendy and I on one couch, P. Lee on the other, and a dear woman that I got to know a little later in a chair on the other side of the room.

No film crew.  No noise. No bigness.  Just the small, simple presence of the 4 of us in that room.  The door was closed so that we were not distracted by the activity that was happening in the offices and downstairs.  I felt so honored, so important, so loved. Maybe he thinks I’m someone else? Maybe he thinks I represent a company or a country or an organization?  Maybe he thinks I brought a gift?

My mind went back to that morning as I was getting ready to leave the house.  I had some music playing as I hurried around, preparing for the day, all the while wrestling with this idea.  “I have nothing to bring.”

I had wanted to bring so many things. Diapers, lotion, formula, practical help.  Or maybe some money; I should have done a fundraiser! Or even just a small gift for the amazing servants who work there; what would they like?  How many people are there? What if I bring too much? Too little? What is the gift-giving culture there? Will I be doing more harm than good if I bring gifts?  Too many noisy, conflicting thoughts.

When I had first gotten in touch with Mr. Yang, I asked him what I should bring.  I was planning to carry an extra suitcase, full of 30 kgs of whatever I could. His reply to me was simple.

“I need your love for the Babybox children. I’ll contact you again if there’s anything more you need.”

Come as you are

But here I was, weeks later, worrying.  Why does this happen? My heart is settled, then in a moment I am swept away, like a leaf pulled from its branch on a windy day.  I am carried so quickly into a place where I would not normally go. I find myself far, far away from the tree, my life source where I have a place and health and strength.

The next song on my playlist began.  “Come As You Are” by Crowder

So there I sat, nothing in hand, not sure what to say, a few feet away from Pastor Lee, one of my personal faith-heroes, among others such as Mother Teresa and Corrie Ten Boom, who I look forward to sitting on a couch with in heaven one day.

I introduced myself briefly through Wendy’s kind translation, and don’t really remember so much of what I said, except that he listened with such kindness in his eyes, and at some point I felt like I sounded like one of the adults in the Charlie Brown movies… waaa-waa-waa-waaaa… ok, Nikki.  Stop talking now.

Isn’t it funny how we feel like we need to represent ourselves to people? Like, here’s my list of credentials, here’s why you should think I’m awesome and accept what I say as valuable. This is why I’m important. Enough of that.

I don’t remember all the words that he said.  I wish I had a recording so that I could write them all down and think about them.  But I do remember a few things that will always be tucked away in my heart. I do remember that he treated me with the highest respect, and that status and accomplishments were not the context of our conversation.  He spoke of the work of God. He told the story of the first baby they found. In a fish box in the freezing cold. He told of carrying the baby up the stairs, imagining that it was dead because it was so cold. He told of those important moments when God made it clear to him that he needed to do something.

He talked about the work of God with confidence, not pride or self-importance. With humility, without the least sense of self-depreciation or introspection or fear.

He spoke of some current hopes and dreams about where the Babybox idea could go – his ideas and prayers for the future.  It was as if he was not just telling me information, but more like he was sharing a bowl of food with me. We were eating from the same bowl, drinking from the same cup.  Not- this is my work, you should do this, too. But rather- let’s eat together. Here, have some chopsticks.

I’m sure I shed some tears, and his eyes brimmed on several occasions as well.  He spent probably 30 minutes with us – all the while knowing that there were important people waiting for him to do the next thing.  I couldn’t catch all that happened when he left, except that it was something to do with the filming. I’m sure they were on a time-table, and that he really did need to honor his other appointments. 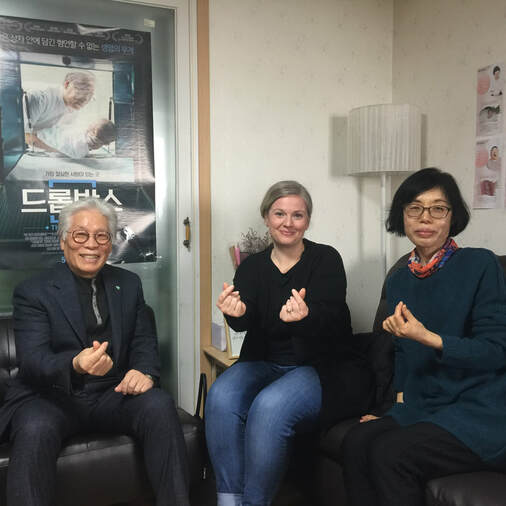 I’m not sure how to wrap this up, except to say that my time with him gave me a sense of fullness, a sense of belonging, an intense face-to-face realization of Love.

Have you ever had that feeling?  Maybe looking at a piece of art, or reading a book, or hearing a song; that feeling of rightness, completeness, wholeness? There is a wholeness to be found in this life.  I really believe it. And it comes from the least likely places. Pastor Lee lives the words he spoke in The Drop Box film “Every single life has a purpose.”

What can I learn from these lives?  The lives of the sacrificial workers and pastors and givers.  The moms who have chosen to save their children’s lives. The babies who have been given hope.  The beautiful children with (what the world would call) disabilities. There is purpose, wholeness in each.  Dark moments, underground work, struggles of late night doorbells and failing health. Giving up things that you once held dear.  Mustering up that last drop of persistence when you feel least able, because of the keen (but at times distant) awareness that this is God’s work.

People are amazing.  We are God’s handiwork – His masterpiece.  Each one, great and small, loud and quiet, known and unknown.  Each life has value because of its Creator. And not just an intangible, “Oh, that’s nice” kind of value.  But a weighty realness. A wholeness. We are on journeys to discover our own worth. But not to the exclusion of the tapestry that is being woven all around us.  We need each other’s so-called weaknesses as much as we need each other’s so-called strengths. That sounds nice, but I think I need to sit there for a while.

What does that look like in my life today?  I’m not working in a home with orphans, or caring for disabled people.  I’m not rescuing babies or changing a leper’s bandages.
I’m a mom, a wife, a teacher.

Time for noticing, time for listening, time for rejoicing and weeping and being.  Time for thinking about people, carrying them in our hearts. Praying for them, knowing them, being a friend.  Asking God – Can you really, really teach me to know and appreciate and understand the people around me? If He can (and I believe He can!), then maybe I am- in the real Reality- working, caring, rescuing, changing bandages.

Ever looking forward to that beautiful day when my faith becomes sight…
For now, in this time of imperfection, we see in a mirror dimly (a blurred reflection, a riddle, an enigma), but then, when the time of perfection comes, we will see reality face to face. Now I know in part, just in fragments… but then I will know fully, just as I have been fully known by God.  I Corinthians 13:12, Amplified