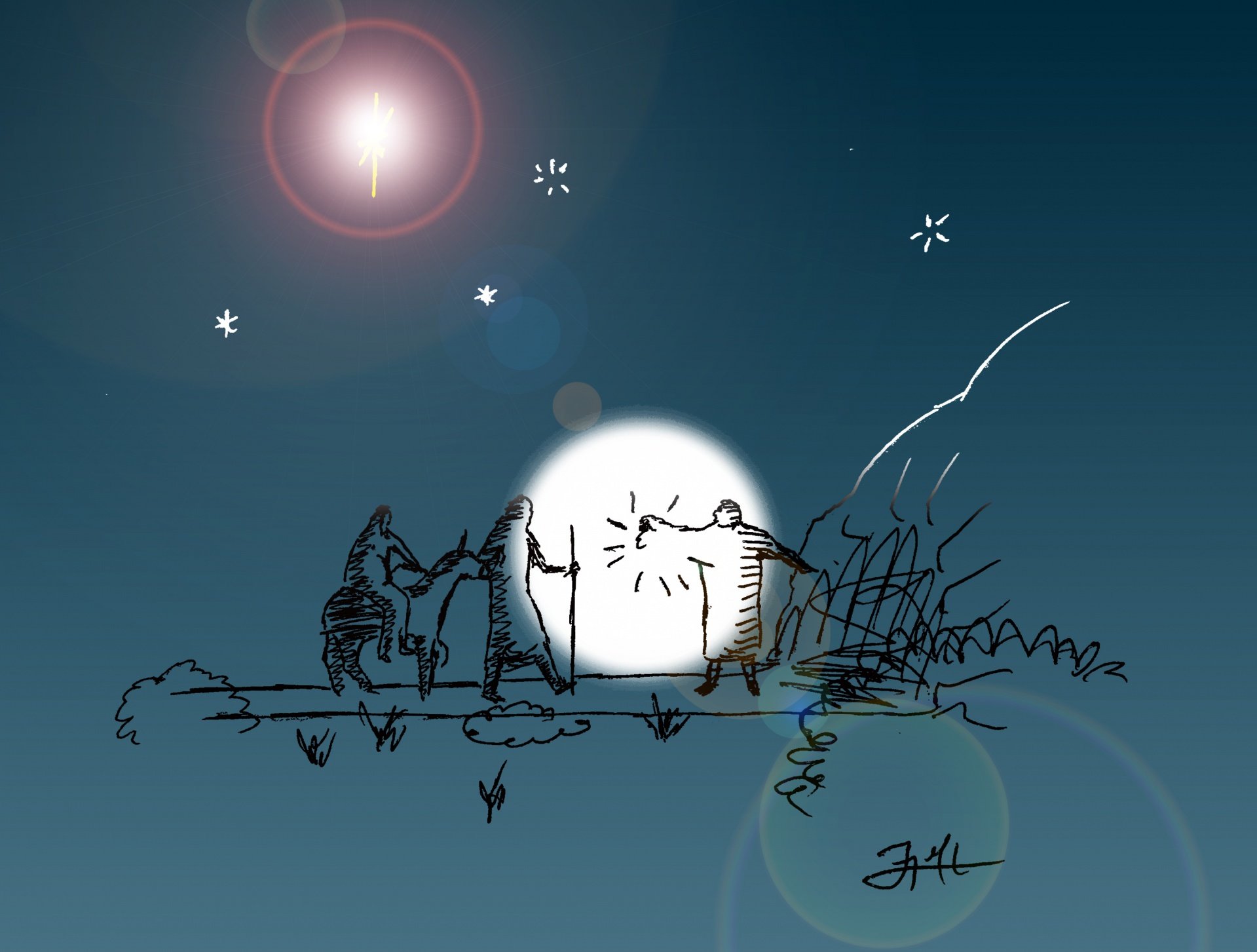 It was the point of entry for Jesus. The Son came here as Immanuel, God with us. It was at that time a shepherd’s place. This makes sense:  the Good Shepherd first showed up in a sheep town.

We are talking about the little town of Bethlehem, of course. During this season, we think about it and sing about it. It is a town still on the map, as it sits close to Jerusalem, just a few miles to the south of Israel’s royal city. Near this place, Jacob buried his wife Rachel after she perished in giving birth to Benjamin. This town was where the widow, Ruth the Moabite, arrived with her also widowed mother-in-law Naomi. And,  in one of its fields, Ruth met Boaz who took her to be his wife.

Since the days of the Roman emperor Constantine, Bethlehem has been something of a tourist attraction; a site Christian pilgrims have sought to visit. It was Helena, Constantine’s mother, who supposedly located the spot where Jesus was said to have been born. She at once had a chapel constructed there. This project, and the others erected at various places, related to the scenes of Christ’s life on earth and sparked the movement of Holy Land excursions

Bethlehem was the boyhood home of King David, the place where he watched over his father’s flocks. In its fields and hills, David learned and wrote the praises that he would sing unto the Lord. It was here also where this boy, according to his own words, killed a lion and a bear that threatened to harm the sheep in his care.

House of Bread, Place of Fruitfulness

Sheep were a big part of life in Bethlehem. The shepherds here likely raised and supplied the majority of animals that were offered at the Jerusalem Temple during the Passover celebrations that came year after year.

The Son’s arrival was forecast in prophecy right down to this exact place. We read of it in Micah 5:2 – “But you, O Bethlehem Ephrathah, who are too little to be among the clans of Judah, from you shall come forth for me one who is to be ruler in Israel, whose coming forth is from of old, from ancient days.”

“Bethlehem Ephrathah” carried this meaning in the Hebrew — the house of bread and the place of fruitfulness. This little town would be the birthplace of the Bread of Life and the True Vine (see John 6:35 and 15:1).

The One and only Savior and eternal King, Jesus, came as a little baby to a little place. Click To Tweet

The One and only Savior and eternal King, Jesus, came as a little baby to a little place.

And none of the big shots were in on it. News of the King’s birth came as a shock to King Herod. Also, caught off guard were the Temple priests and Jewish scribes; these keepers of the Book failed to see Him in the Scriptures.

Instead, it was the “little ones” who got the invitation to come and see the Son of David. The shepherds of the field were treated to an angelic announcement and to the music of Heaven. These men, like David before them, were just going about their business. They sat up at night to protect their flocks from the predators in the region. And then the sky came alive for them.

Luke 2 describes what they experienced that holy night. “And the angel said to them, Fear not, for behold, I bring you good news of great joy that will be for all the people. For unto you is born this day in the city of David a Savior, who is Christ the Lord” (Luke 2:10).

Notice the message these shepherds heard. This was the “good news of great joy” for all people and for them personally. The Savior, Christ the Lord, was born unto Mary in one sense, but He was also born unto these simple shepherds and unto all of us in the deeper and bigger sense.  He was wrapped in swaddling clothes; He now wraps those who call upon Him in His robes of righteousness.

Where would the Holy One be found? The angel told the shepherds this:  He would be asleep in a manger — a food bin that served as His crib. This was something that these men of the flocks knew well. Jesus came right to where these shepherds lived and worked. His birth happened not in an inn or an emergency room. His birth came out in the open; He was right there for the shepherds to see.

The everlasting Light shined in the dark streets of Bethlehem. A small town and its small people were put right at the center of the Advent story. That’s what the Incarnation of Christ is all about – God the Son took on flesh and bone. He came to live as one of us, to walk as the lowliest of us in order to die for all of us.

The Good Shepherd was born among Bethlehem’s shepherds and sheep to become the Lamb of God slain for the sins of the world. Only through Him do we find peace and goodwill on earth.

How silently, how silently
The wondrous gift is given
So God imparts to human hearts
The blessings of His heaven
No ear may hear His coming
But in this world of sin
Where meek souls will receive him still
The dear Christ enters in