Refugees, Safe and Hidden in Him 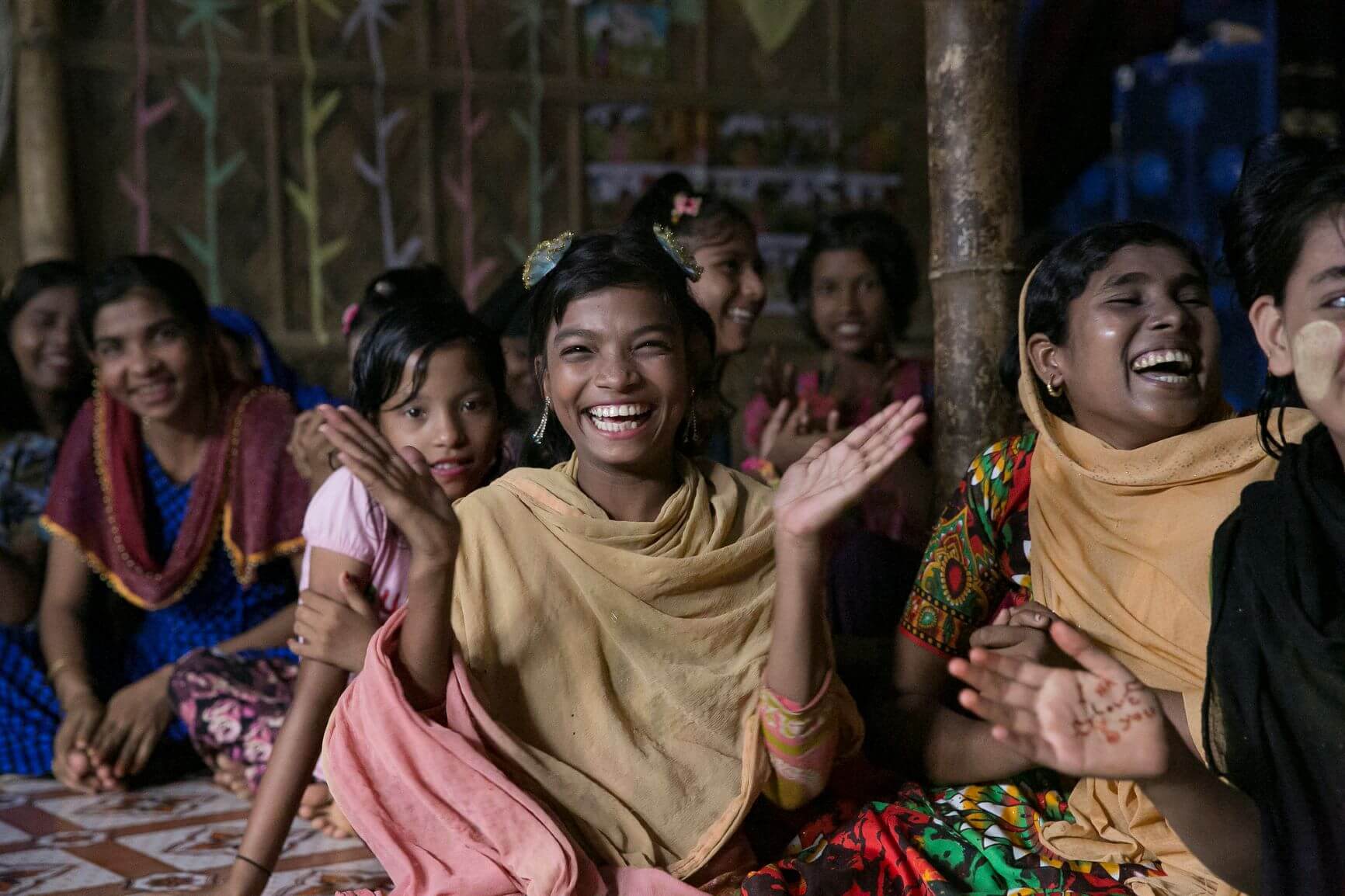 “He gives the best of shelter, in the worst of danger.”   (Spurgeon)

We are refugees, people who have fled for Refuge, yet without self-effort. For salvation, we have believed, trusted in the One Who in Himself has provided it.  We have fled for refuge – and continue to – from the flesh and the things of this world (II Timothy 2:22), “to lay hold of the hope set before us: (Hebrews 6:18).  But this fleeing is an act of faith, the faith that has overcome the world (I John 5:4).  In the NIV Bible the word “refuge” is mentioned 88 times, 87 of which are in the Old Testament –  not surprising, because there was not the assurance which we have, through the Cross, of being “in Him” (which in Paul’s epistles occurs about 164 times!).  We’re going to look at two words which help us understand just how safe and hidden we are, in Him.

The words “refuge” and “hiding place” are similar yet distinct one from the other.  Refuge (derived from the latin “fugio”, “flee”)  is defined as a “shelter;  protection from danger, difficulty, etc;  a safe retreat” (Vine’s  Expository Dictionary of OT and NT words).  In Numbers 35:6-28 we learn of six cities of refuge, built for the Levites … priests, like us!  They were “for refuge from the avenger”, so that a man would not die without a fair trial.  In verses 26-28 we read that “if the manslayer … goes outside the limits of the  city of refuge where he had fled, and the avenger of blood finds him outside the limits of his city of refuge, and the avenger of blood kills the manslayer, he shall not be guilty of blood, because he should have remained in his city of refuge until the death of the high priest.  But after the death of the high priest the manslayer may return to the land of his possession.”  What a picture of us, no less guilty of sin than a mans layer!  Our High Priest did die but now lives, and we have fled to Him for salvation, for protection and shelter from the destroyer, and now we are free to “possess our possessions” – all that has been given to us through the new birth, all of the spiritual blessings in the Heavenlies which are ours through faith (Ephesians 1:3).  And when we sin, we flee in our hearts to our Resurrected, Ascended High Priest in Heaven Who is at the Throne of Grace where the Mercy Seat is (Hebrews 4:16). This is our sure and unchanging place of refuge.  The writer of Hebrews also said, “We have strong consolation, we who have fled for refuge to lay hold of the hope set before us.” (Heb.6:18)  David understood this truth, hundreds of years before the Cross:  “God is our Refuge and our Strength, a very present Help in trouble.” (Psalm 46:1);  “You are my strong Refuge … , You Who save by Your Right Hand those who … take refuge in You … ” (Psa.71:7,8);  “In You, O Lord, do I put my trust and seek refuge, let me never be put to shame …;  … Be my Rock of Refuge!” (Psa.31:1,2).  And in Psalm 91 ( a favorite Psalm of many believers) the actual word “refuge” is only mentioned 3 times, but the entire Psalm infuses the attentive reader with confidence that we are safe as we abide in “the secret place of the Most High” and  have refuge since we have made Him our “dwelling place” (vv.1,2,4,9).  This Psalm so rich in promises for refuge also imparts great hope to the believer as to having a “hiding place” in Him.

“He who dwells in the secret place of the Most High shall remain stable and fixed under the shadow of the Almighty [Whose power no foe can withstand].” (Psalm 91:1,AMPL)

The Psalmist goes on to say:  “Only a spectator shall you be [yourself inaccessible in the secret place of the Most High] as you witness the reward of the wicked.” (Ampl)  David, in Psalm 17:8, cries out with confidence to the Lord regarding this truth:  “Keep me, guard me, as the pupil of Your eye, Hide me in the shadow of Your wings.”  Then in Psalm 32:7 he declares:  “You are my Hiding Place … “, and in Psalm 32:20a, “You shall hide them in the secret place of Your Presence form the plots of men, …” , an appropriate example of Vine’s definition of “hide”:  “to put or keep out of sight; to conceal from the knowledge of others;  to keep from being seen by covering …”.  Again, we see David expressing his trust in God’s protection in Psalm 16:1 – “Keep me and protect me, O Lord, for in You I have found refuge, and in You do I put my trust and hide myself.”

The Lord Jesus Christ is Face to Face with the Father while we are hidden in Him. Click To Tweet

The Lord said this to Moses because His Glory was about to pass by him;  and although Moses wanted the Lord to show him His Glory, the Lord knew that Moses would surely die if that were to happen. So He hid his friend and allowed him to see only His back (v.23).  Now concerning us as members of the Body of Christ, we are already dead, hid with Christ in God (Colossians 3:3).  He had to hide us in Christ, Who is in the Father (John 14:20) or we would surely die!  The Lord Jesus Christ is Face to Face with the Father while we are hidden in Him.  Therefore, for now, we behold the Glory of God only as in a mirror (II Cor.3:18), but one day we will be face to Face!

Here is one last example of how safe and hidden we are in Him.  Let’s consider what the Lord is promising to us in this verse.  Spurgeon writes in TheTreasury of David, Vol.I (Part Two), page 3:  “The royal pavilion was erected in the centre of the army, and around it all the mighty men kept guard at all hours;  thus in that divine sovereignty which almighty power is worn to maintain, the believer peacefully is hidden, hidden by himself furtively, but by the king, who hospitably entertains him. ‘In the secret of his tabernacle shall be hide me.’  Sacrifice aids sovereignty in screening the elect from harm.  No one of old dared to enter the most holy place on pain of death;  and if the Lord has hidden his people there, what foe shall venture to molest them?”   We are so safe!

We are not only hid with Christ in God, but also in the Body of Christ, in His Eternal Purpose, and hid in the shadow of His wings.  He has hidden us in the secret place of His Presence from the plots of man but also from the plans and strategies of the devil (Luke 10:19;  I John 5:18).  In His pavilion and in the place of His tabernacle, the Holy of holies, He has set us in His presence forever (Psalm 41:12).  When we fail we flee to the Cross, to the Throne of Grace, to the Mercy Seat, where we receive a multitude of mercies instead of what we deserve;  and we receive Grace in abundance to get up, go forward, forgiven and filled with the Holy Spirit once again, by faith.  This is the Finished Work!  This is our refuge from the accusations and lies of the devil.  This is how we can experience redemption from all that was fallen in us and in others around us.  Everyday of our lives we can be confident in the Love which will always  provide this safety, covering and hiding place from the enemy.

“As your days, so shall your strength, your rest and security be” (Deuteronomy 33:25)