Sabbath: Be Still and Know 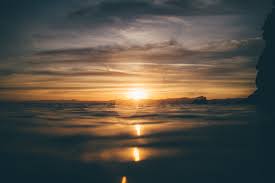 Day 6 of Creation came and the Lord formed Man. God breathed into the dust He had shaped and Man became a living soul. It was very good in the eyes of the Lord; all of what He had made except for this one void, the empty spot beside Man. It was not good that Man was alone. And so the Lord took from Man and formed Woman. Together, they were to be fruitful and multiply. Their offspring were to fill the Earth.

This was the Master’s plan. It was the crown of His Creation. How did the Lord celebrate this? With bells and whistles, trumpets and marches? Not at all. He celebrated this by declaring Day 7 as the Sabbath.

God made Man in His image and so this meant that Man had mind and reason and will and accountability. Man, from the start, possessed a relatable nature. This is demonstrated in the instruction to him – “be fruitful.” Fruit grows through connection. Branches and vines derive their sources of life from the soil that is watered and warmed.

So it was to be with Man. He was made for relationship, for connection to God, to family, and to communities developed by those families.

All of this got its start on that first Sabbath, that initial Day 7. The eternal and infinite Creator was not looking to take a break. He was seeking to fuel the connection with Man as His prized creation. Jesus Himself declared that the Sabbath was made for Man, not Man for the Sabbath (see Mark 2:27).

God set aside this Day as one of rest, but not as one of inactivity. What was to happen on this Day was to bless Man in the area of his relationships.

I view Day 7 as the time when the Lord spoke to Man and said, “Come, sit, eat, talk with Me.” The Creation process was masterful and complete. God spoke Light. He positioned the sun and moon and stars. He established the boundaries of the seas and the lands. He populated these spaces with fishes and birds and animals and creeping, crawling things.

The Lord then set Man in the midst of it all and proclaimed him king over it. He was given dominion and also sustenance, found in the Garden full of trees that would provide seed and fruit for Man’s nourishment. Man was given and instructed to dress and keep this Garden. He was to manage and cultivate his physical setting and the things that God put in it.

There was, however, more to man than his space and place on this planet.

Man has always had an inner life, his soul. This soul was and is something of different substance, something intangible in one way, but also something so full of capacity as well. Click To Tweet

Man has always had an inner life, his soul. This soul was and is something of different substance, something intangible in one way, but also something so full of capacity as well.

The soul also required dressing and keeping, nurture and cultivation. And so God established the Sabbath. This, the Lord saw, was a time for soul work and heart health.

“Be still, and know that I am God.” David wrote this in Psalm 46:10. That’s the nature of the Sabbath. And as such this can happen at any time. Legalists corrupted the concept of rest by adding numerous details that had to be followed to ensure right resting.

David wrote the principle down very succinctly. “Be still, and know that I am God.” Could there be anything more important for us to understand?

Think about Him. Stop the thoughts that are racing through your mind. Let your heart rate settle down for some seconds, some minutes, some hours.

That’s what it means to enter into Sabbath. It is a time for us to stop and allow ourselves to be found, to stop running, to come out of hiding, to open ourselves up to God and to others.

Open Up to God

We are far too busy doing things and collecting information. Recreation has become filled with doing, doing, doing. It has led to the 24-hour news cycle, the never-ending pursuit of happiness, the constant strain to discover self. So few ever truly find refreshment and revival.

The Lord has made a way for us to just be, to simply enjoy who we are by knowing who He is.

This sentence came after the Savior had given John the Apostle a series of messages about what was right and wrong in regard to a number of churches. This, however, was the concluding remark.

God knocks upon the door of our hearts. He seeks us and desires that we open up to Him. If we do this, there’s a remarkable thing that He promises.

What’s in that promise?  Sabbath is.

He comes in and sups with us — God and us at the table together, talking, loving, rejoicing. This is the way of faith life that the Lord longs to see in His people. Let’s wait upon the Lord and renew our strength.

There’s never been a time when we’ve needed to do this more.