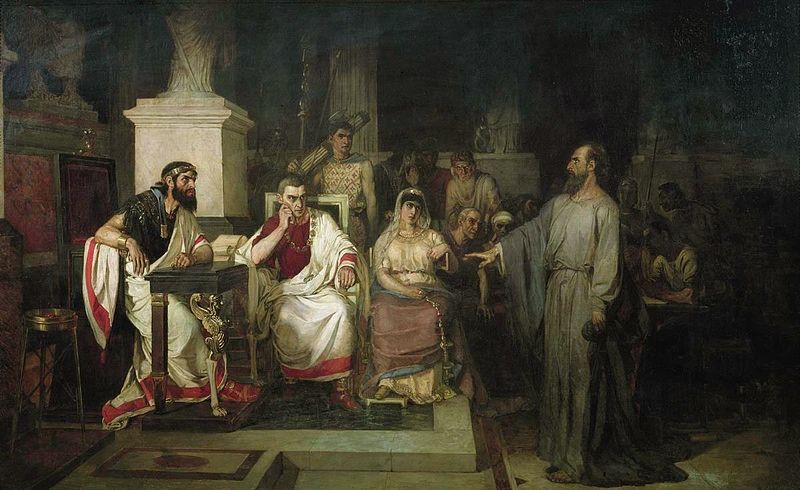 “You are permitted to speak for yourself.”

Paul was standing before Roman rulers – Agrippa and Festus — and a group of assembled dignitaries and officials of Caesarea. He stood chained, accused, and innocent of any crime against the Empire. And, yet, he remained in custody.

It was his life as a Christian that put him there. His work as a witness sparked revivals and riots in the cities where he labored as a preacher and teacher of the Word and the revelation of God given to him.

A capable and ambitious Pharisee, Paul once opposed the way of the Christian. He hunted down and did much violence to the pockets of Jesus followers in and around the region of Judea.

He sought to expand his persecution program by taking it on the road. En route to Damascus, Paul, then known as Saul, encountered Jesus Himself.

The Lord shined His Light from Heaven and the vision threw Paul off his high horse. He was left blinded and with his face in the dirt – even his fellow travelers were driven to their knees.

Christ spoke words that only Paul could understand: “I am Jesus whom you persecute. Rise and stand on your feet, for I have appeared to you for this purpose, to make you a minister and a witness. …” (Acts 26:15-16).

And so this minister did witness. Paul, once destined to be the future star among the Jews’ rabbinic academics, became the pioneer missionary-church founder and chief theologian of the early Church. His grasp of the Hebrew Old Testament supplied him with an abundance of material.

Resurrection and eternal life were too real to Paul for him to keep quiet about it. He had seen too much to deny the reality of the risen Christ Click To Tweet

The grace message was delivered to him in his meditation and fellowship with the Father, Son, and Spirit. Paul framed and illustrated his teaching with stories and information taken from the words of Moses, David, and the prophets. These Gospel truths were for everyone – Gentiles, as well as Jews.

There, in that Roman hearing hall, Paul stood on the faith of the Son of God, who gave Himself for Paul and for all. This group was going to get quite a story, a testimony of what the Lord does with those He calls to Himself.

This was not the first time Paul had spoken for himself. Everywhere he went he spoke for himself. The Message was his – it filled his whole heart, mind, and spirit.

Resurrection and eternal life were too real to Paul for him to keep quiet about it. He had seen too much to deny the reality of the risen Christ. The power of that heavenly vision made it impossible for him to be disobedient to it.

Paul told his august audience that he was absolutely convinced of this very thing: “Christ Jesus suffered that He should be the first that should rise from the dead, and should show light unto the people, and to the Gentiles” (Acts 26:23).

These phrases prompted an outburst from governor Festus:  “Paul, you are beside yourself – what you know has made your mad.” I think there were murmurs and snickers all about the room. The idea that the dead could come alive struck many as ludicrous. The prevailing philosophies of the era viewed bodily resurrection as a stupid and unwelcome future for the souls of men.

Paul stood firm. His words were serious words of truth. He refused to back down. He would not take back his story. “Why should it be thought a thing incredible with you, that God should raise the dead?’ He argued.

He playfully addressed Agrippa and said, “You believe the prophets, don’t you? I know you believe.” To which Agrippa replied, “You almost persuade me to be a Christian.”

And that was precisely the point of all that Paul said. This was a soul-winning message. “I would to God that not only you but also all who hear me this day might become such as I am—except for these chains.”

The jailed one was, in essence, telling his jailers that he was better off than they were. Yes, he was chained, but his spirit and heart soared with liberty. He was under Roman authority, but he was truly free from the big law, the law that really matters, the law of sin and death.

The gears of the Roman justice system did grind on for Paul. His status carried him to other places where he would share this Message – in various ships, on the isle of Malta, in this Italian town and that one, and in his quarters in Rome itself. Even the imperial palace would hear this man, and some there, living in service of Nero, would listen and believe.

“I want you to be like me.” That was what Paul said.

Is this how we speak ourselves? I think that it should be.

“I want you to be like me.” Have you ever thought of saying that someone? To an unbeliever?

It is no statement of pride. It is really a statement of fact in our eyes. We believe the Scriptures, that the life that we now live we live by the faith of the Son of God.  It is the reality of the regeneration and righteousness given to us by the Son.

For more about Paul and his speech before Festus and Agrippa, watch “I Answer for Myself,” a message preached by Thomas Schaller, Pastor of Greater Grace Church in Baltimore.