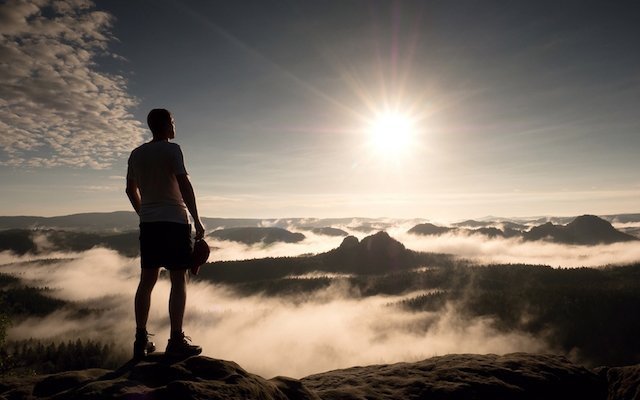 Caleb believed God. He possessed a heart and a spirit that made him ready for action. He saw the Lord’s hand at work in what He did for the people of Israel. They had been delivered mightily, their oppressors plagued, plundered, and sunk. The chosen of God had been more than let go; they’d been sent out laden with spoil from a battle they did not fight, a battle that belonged to the Lord.

These were the things that danced in the mind of Caleb as he thought of what God was going to do next. The escape was only the beginning and he knew it. His vision was set upon what was to come.

Saved from bondage in Egypt, these people were now loose in the wilderness. The Land of Promise, a place flowing with milk and honey, awaited them. God was guiding. Soon their place was right there before them, ripe and ready for them to march upon it.

And Caleb was more than eager to get busy with claiming the territory. He, Joshua and ten other men were sent on reconnaissance mission. As a result, they all got to taste and see what the Lord had prepared for them. Pomegranates and figs and huge grapes abounded. It was all that God had promised and then some.

The feeling of the holy ground beneath his feet stirred Caleb deeply. He couldn’t wait to rally the people and lead the charge to this home that was theirs from the Lord.

His was a minority opinion, however. Only Joshua stood with Caleb in faith and confidence.

The majority report was an evil one – an account that focused on the big men and walled cities of Canaan. God and all that He had done in delivering them from Egypt was far from their minds and hearts at this point.

A grasshopper complex gripped them. “We’re too small and too puny to take on these people. We’d be better off heading back home to Egypt.”

The anger of the Lord flashed at this stubborn group. A number were struck down by a plague after Moses pleaded with God not to lay ruin to the whole nation. This intercession stopped a possible annihilation, but didn’t bring deliverance from the consequences of unbelief.

A long season of circuitous wandering lay ahead for the Israelites and for Caleb. It would be nearly 40 years before the people at last entered into the place God had made for them.

What must those wilderness years have been like for Caleb? How did he face those hot, desert days of that misery tour?

I am thinking they were years of prayer and preparation for this man. He carried another spirit and he would not let it wane. This would be no easy thing either. Other challenges came. Among the people, there came slanders and dissensions and even rebellions. Moses himself ran afoul of God’s rule when he smacked a rock to bring water for the families and flocks. This trespass would leave Israel’s great leader on the outside looking in when it came time to pass into Canaan.

One look at Mount Hebron and this faithful fighting man knew he was home – even if he had to lead a military raid to kick out the present occupants. He eventually got to the place where he knew he always belonged. I think he had picked out this spot during his first visit to Canaan. It was high and held by a tribe of giants. The fact that he would have to take it only made it sweeter for his fierce, fighting spirit.

At 85, Caleb gave glory to God for keeping him alive and fit. “… I am as strong this day as I was in the day that Moses sent me: as my strength was then, even so is my strength now, for war, both to go out, and to come in. … Now therefore give me this mountain” (Joshua 14:11-12).

Sure, in comparison to the giants in Canaan, Caleb was a grasshopper. He was, however, a grasshopper ready to jump into the Land and live it up with God. Click To Tweet

We may find ourselves in a Caleb quandary, stuck in the minority with very negative and influential people around us. Their words and arguments seem rational and real and logical. God is left out of the equation.

“We are winners. God is with us. Let’s go.” Those were Caleb’s thoughts. He remembered Passover and how the blood of lambs delivered his family and friends from death. He re-imagined the scene at the Red Sea, where God opened wide a dry pathway of escape. And he kept his eye on the Pillar, the cloud that was with Israel at all times, one that glowed with the glory of the Lord in the dark.

Sure, in comparison to the giants in Canaan, Caleb was a grasshopper. He was, however, a grasshopper ready to jump into the Land and live it up with God. While others occupied themselves with obstacles and opposition, this soldier of the Lord was ready to take the leap of faith.

The Heart at Home

I believe Caleb breathed out confidence and faith in his home over the 40-some years of wanderings with Israel. The evidence can be seen in the actions of Aksah, his daughter, at Hebron. Married off to the conqueror of the mountain, the daughter sought an extra blessing. She and her husband had a field, but she wanted a fresh water supply to go with it.

What Dad could refuse such a request? Proud of Aksah’s confidence in him, Caleb gave her the upper and lower springs (see Joshua 15:17-19).

The Lord Father had been good to Caleb and Caleb was good to his faith-filled daughter.

We are people made alive in Christ. The Promise of eternal life is ours. We are the sheep of His pasture, sheep who must trust the Good Shepherd and pay attention to His Voice. This is what will help our unbelief.

Consider again and again the testimonies of God’s faithfulness. Believe Him and pray big, bold, remarkable, outrageous prayers. With Him nothing is impossible, even for grasshoppers like us.

Learn more about Caleb and his spirit and heart by checking out “True Bows and Straight Arrows,” a message preached by Thomas Schaller, Pastor of Greater Grace Church in Baltimore.