The Deity and Humanity of Christ 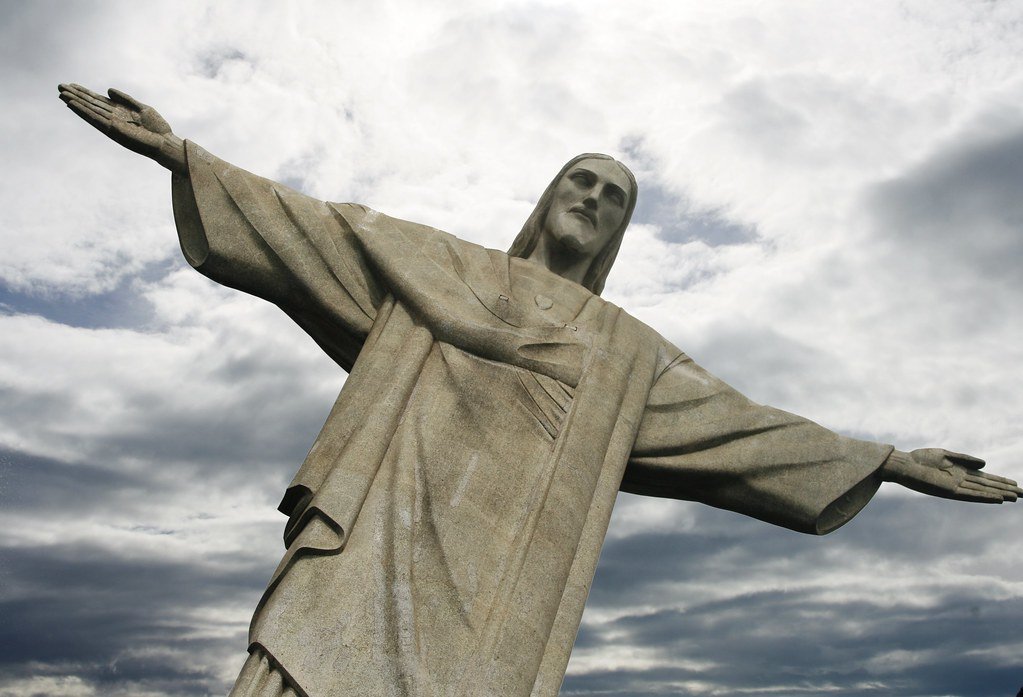 “In the beginning was the Word, and the Word was with God, and the Word was God. He was in the beginning with God. All things came into being through Him, and apart from Him nothing came into being that has come into being. In Him was life, and the life was the Light of men. The Light shines in the darkness, and the darkness did not comprehend it. There came a man sent from God, whose name was John. He came as a witness, to testify about the Light, so that all might believe through him. He was not the Light, but he came to testify about the Light. There was the true Light which, coming into the world, enlightens every man. He was in the world, and the world was made through Him, and the world did not know Him. He came to His own, and those who were His own did not receive Him. But as many as received Him, to them He gave the right to become children of God, even to those who believe in His name, who were born, not of blood nor of the will of the flesh nor of the will of man, but of God. And the Word became flesh, and dwelt among us, and we saw His glory, glory as of the only begotten from the Father, full of grace and truth. John testified about Him and cried out, saying, ‘This was He of whom I said, ‘He who comes after me has a higher rank than I, for He existed before me.’For of His fullness we have all received, and grace upon grace. For the Law was given through Moses; grace and truth were realized through Jesus Christ. No one has seen God at any time; the only begotten God who is in the bosom of the Father, He has explained Him.”  (John 1:1-18)

For many Christians, the gospel of John is their favorite book of the Bible. It is so different than the other gospels on many levels, not the least of which is its unique perspective, focusing its attention to the events in Jesus’s life on the “why” rather than the “what happened.” This is one reason why Clement of Alexandria, around 230 AD, wrote: “Last of all, John perceiving that the bodily facts had been made plain in the gospel, being urged by his friends, composed a spiritual gospel.”

After nearly a century of life experiences and challenges against the central events of his life (namely the three years or so spent with the Savior of the world), John had a unique approach to telling the story after it had been told already by others qualified to tell it so many years before. He could choose particular events to relate that would agree with his Spirit-inspired narrative. His emphasis was the beginning of Jesus’s ministry and its ending. Many of these events are not mentioned by the other writers, including the marriage feast at Cana (chapter 2), the coming of Nicodemus to Jesus (chapter 3), the Samaritan woman at the well (chapter 4), the raising of Lazarus (chapter 11), the washing of the disciples’ feet (chapter 13), and the many references to the Holy Spirit, the Comforter in chapters 14-17. And it is also interesting to note that John doesn’t reference any parables in his work.

Written more than 30 years after the other three, John probably wrote it from Ephesus at the end of the first century when he was in his 90s and at the urging of friends and colleagues. The times were very different, with a number of heresies having been perpetrated by an enemy that was still trying to destroy Christianity in its infancy. Two in particular that were gaining momentum at the time needed addressing. Gnosticism, a variety of movements that saw matter as evil and spiritual as good, argued that God had nothing to do directly with creation, but through a series of emanations until the creator would come forth, far removed from God. The other heresy recognized John the Baptist as someone more than a prophet and therefore did not allow Jesus to be recognized as Messiah.

Not only did John wish to specifically address these heresies, but he wanted to address the Greek (Hellenistic) and Jewish minds of the day through the concept of the “logos.” To the Greeks, “logos” meant not only word, but more importantly reason, organized thought, and in reference to God, His mind. They believed in two worlds, the one we live in where realities are unclear and the spiritual realm representing the real world. They saw the material world as full of unrealities while the immaterial as fully real.

On the other hand, the Jews saw words more than mere sounds, but existing independently and having something to do. This concept of the word still exists today in the East, people seeing word as having power and doing things. According to William Barclay’s “The Gospel of John, Volume 1,” it is told that Sir George Adam Smith was travelling in the desert in the East and a group of Moslems gave his party the customary greeting: “Peace be upon you.” They discovered later that he was a Christian and hurried back to try to take back the words of blessing from the infidel. They believed the blessing of words had a life of its own.

The Jews also view words of God as having creative power, consistent with Genesis 1 and Psalm 33:6 – “By the word of the Lord the heavens were made.” The wisdom books of the Old Testament also use the word “wisdom” as having power unto itself.

It was with these issues in mind that John, under inspiration, addressed these many realities through the first 18 verses of his gospel. In this passage, John confirms that the Word, the very mind of God, existed before creation and was God. This Word also was responsible for all of creation (also see Colossians. 1:16). In verses 6-8, John addresses John the Baptist and his position in relation to Jesus. In verse 14, “the Word became flesh, and dwelt among us.” It is clear from these Scriptures that Jesus Christ is fully God and fully man. Then in verse 17, he contrasts Moses and the old covenant (the Law) to Jesus and the new covenant, a covenant defined by grace and truth.

To enter the New Covenant, one must believe in the deity and incarnation (humanity) of Jesus; these are cardinal doctrines, meaning they are requirements. The gospel of John begins with these truths because they are foundational to a relationship with Him. There are a number of religious systems that refer to themselves as Christian, but they do not recognize the full deity of Jesus. Yet the Scriptures are clear on this subject. In fact, Jesus went out of His way to make that point to many, including the Jewish leadership. They could recognize His humanity, but not His deity. As a result, Jesus spoke to His disciples and His enemies in many different ways that He was the Messiah and therefore, fully God (see John 4:25-26). John 1:1 is one of many testimonies in Scripture to His deity. However, many over the years have raised real questions about His humanity.

In 1 John 4:2-3, “By this you know the Spirit of God: every spirit that confesses that Jesus Christ has come in the flesh is from God; and every spirit that does not confess Jesus is not from God; this is the spirit of the antichrist, of which you have heard that it is coming, and now it is already in the world.” John was making it crystal clear that confessing the Incarnation, the fulfillment of Isaiah 7:14 and other Old Testament verses, was one barometer of a legitimate salvation. This matter also becomes a point of contention for those who have embraced a spirit of antichrist. In 2John 7, “For many deceivers have gone out into the world who do not confess Jesus Christ as coming in the flesh. This is a deceiver and an antichrist.” Like the Gnostics at the time John wrote these words, they operate with the same deceitful methods as the god of this world.

There are a number of heresies that are the result of a lack of acceptance of the deity and humanity of Christ. These include not only Gnosticism, but also Ebionism, Sabellianism, Arianism, and Apollinarianism, to name a few. In each case, there is not a full acceptance of both the deity and humanity of Christ, resulting in some doctrinal error or heresy. A number of non-Christan movements are rooted in some of these philosophies, including the Jehovah’s Witnesses. But why are both doctrines of critical importance?

When Jesus, the second person of the Trinity and fully God became a man, He was revealing that man now had a means of experiencing the full blessings of a relationship with God, Himself. In fact, He said as much in John 14:6, when He told Thomas, “I am the way, the truth, and the life.” He was teaching that through Him, the mediator of a new covenant, man could experience the supernatural privileges of being “in Christ,” who was both God and man. (“For there is one God, and one mediator also between God and men, the man Christ Jesus” – 1Timothy 2:5). It is through identification with our humanity that the New Covenant would surpass the old covenant. In 2 Corinthians 3:7-11, “But if the ministry of death, in letters engraved on stones, came with glory, so that the sons of Israel could not look intently at the face of Moses because of the glory of his face, fading as it was, how will the ministry of the Spirit fail to be even more with glory? For if the ministry of condemnation has glory, much more does the ministry of righteousness abound in glory. For indeed what had glory, in this case has no glory because of the glory that surpasses it. For if that which fades away was with glory, much more that which remains is in glory”.

Triumph over death and sin

Another accomplishment requiring His humanity was His triumph over death. In Hebrews 2:14, “Therefore, since the children share in flesh and blood, He Himself likewise also partook of the same, that through death He might render powerless him who had the power of death, that is, the devil.” By overcoming death, Jesus not only conquered death, but also provided a victory over the fear of death that subjects people to bondage (verse 15). In addition, Romans 8:3 testifies that “He condemned sin in the flesh” since Jesus was “an offering for sin” by His Father. This could only be accomplished in the flesh.

Finally, Paul summarized the mystery of godliness (eusebeia – well-directed reverence, externalized piety or devotion) this way in 1 Timothy 3:16, “He who was revealed [made incarnate] in the flesh, was vindicated [justified] in the Spirit, seen by angels, proclaimed among the nations, believed on in the world, taken up in glory.” It is divine power confirmed through the true knowledge of Christ’s deity and humanity that “has granted to us everything pertaining to life and godliness” (2 Peter 1:3).