The Light of Sotkamo 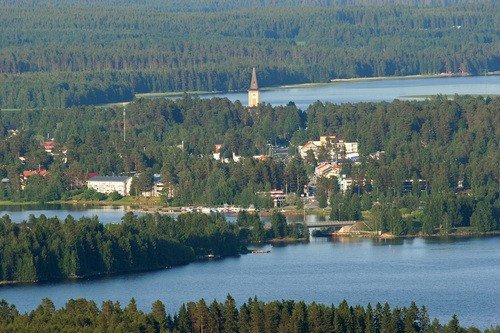 To those who remember her, Huli Valpasvuo was like a Sotkamo summer day.

Her life was full of light. She seemed to shine all the time just as the midnight sun does in this village situated in central Finland, where dusk is a stranger during the months of June and July.

Like Nazareth, where Jesus grew up winning favor with God and with men, Sotkamo represents another among many nondescript places where God chooses to start His mighty works.

The village’s population stands at about 10,000 – and it carries a good reputation as a fine winter sports resort. It also home to some of the craziest fans of pesapallo, a Finnish sport that resembles American baseball. The Sotkamon Jymy team is among the nation’s top pesapallo squads.

The skies above the town also draw meteorologists and astronomers who long to see the Kern arc, an extremely rare atmospheric phenomenon. The arc appears as a halo above the horizon and its lower part glows with color. It appears as something of an upside-down rainbow that has been labeled “the grin in the sky.” The first photos of the Kern arc were made in Sotkamo in November 2007.

To us, that “grin in the sky” perhaps represents the smile of God, as He worked to originate one of His great moves in a small place with a faithful woman who prayed big prayers.

In the spirit of Anna

A widow, Huli followed the example of Anna in Luke 2. Following the death of her husband in a car accident in 1966, she had a renewal of faith and dedicated herself to the Lord and to prayer, particularly interceding for the youth of Sotkamo.

Though Huli Valpasvuo passed into eternity in 1995, the investment she made in the lives of those in Sotkamo and beyond brings continuing returns. The seeds she sowed are still bearing fruit to this day. During the 1960s and ’70s, the village was home to around 5,000. Huli made her home near the middle and high schools of Sotkamo. A substitute teacher, she gained connections with the students and soon opened her living room for weekly prayer meetings and Bible studies. The meetings became so popular that the furniture had to be pushed out of the room so Huli could accommodate her guests.

“That living room was full of 30 teen-agers,” said Teija Petrone, who began going to Huli’s place in 1971. “She was a woman with such a worldwide vision. Her prayers were not just for us and for Finland, but for Christ’s work throughout the world.”

These petitions included the specific request that God would send a Bible-centered, Finished Work ministry to Finland, said Paivi Janssen, Huli’s granddaughter. Those prayers were answered in some measure in 1975, when Pastor Tom Schaller arrived with a small team in Helsinki, the Finnish capital located eight hours south of Sotkamo.

Pastor Schaller was fresh out of Bible College and was pastoring a church for the first time. God guided him to Finland, a nation that had an open relationship to the former Soviet Union and the old Eastern bloc of communist countries. The late David Wilkerson wrote of the importance of Finland in his 1973 book, “The Vision.” The founder of Teen Challenge and New York City’s Times Square Church expected a revival to touch this country, where many of its 6 million residents were and are nominal members of the Lutheran church.

Finland also was on the heart of Pastor Carl H. Stevens Jr., founder of GGWO and its predecessor The Bible Speaks. It was at Pastor Stevens’ suggestion that Pastor Schaller began looking toward Northern Europe.

Meanwhile, Teija Petrone and several others from Huli’s Sotkamo meetings moved to Helsinki to attend universities there. Soon, the pastor and the students came together and a significant missionary outpost was established. The Finns’ ability to move somewhat freely behind Europe’s Iron Curtain would prove critical to the mission of Greater Grace.

Soviet-controlled areas were quietly penetrated as Finns attended universities and took jobs. Faithful believers were meeting secretly in Ukraine, Poland, Hungary, Romania, and Czechoslovakia to name a few places and these Finnish invaders played big parts in these plantings.

As communist governments began to fall in the early 1990s, these works of God moved above ground and churches were established.

“We all feel as if we prayed for a man like Pastor Schaller to come,” Teija said. “It was on our hearts because it was on Huli’s heart as she led us in our prayers. It took four or five years to happen, but we see what God has done with so many of us.”

Little did anyone know the impact Sotkamo’s sons and daughters have had for the Gospel of Jesus Christ. By one count, 27 from Sotkamo became part of Greater Grace World Outreach and its mission in Finland and throughout the world.

Little did anyone know the impact the Sotkamo sons and daughters have had for the Gospel of Jesus Christ. Click To Tweet

Those from Huli’s prayer meeting have been leaders and servants all over the world. Today you can find them working in critical missions hotspots such as China and Turkey.

“What was special about my mother was her gift of love, steadfastness in the Lord and her good sense of humor,” said Liisa Kraama, whose husband Risto is pastor in Jyväskylä. “She also gave us her blessing when my husband and I went to Lenox in the spring of 1978. When we were led to continue Bible School studies in Helsinki, she came to sit and listen to Bible School classes for few days to make sure ‘it was pure doctrine.’ Being convinced of the same, she just loved the ministry and she just loved the ministry and Pastor Schaller and stood with the ministry even during the hard times of persecution.”

Pastor Schaller and stood with the ministry even during the hard times of persecution. “People throughout Finland came to know my grandmother as a great woman of God,” Paivi said. “She was such as amazing woman of faith and I know just how much I owe my life to her.”