The Man Who Knew His Place 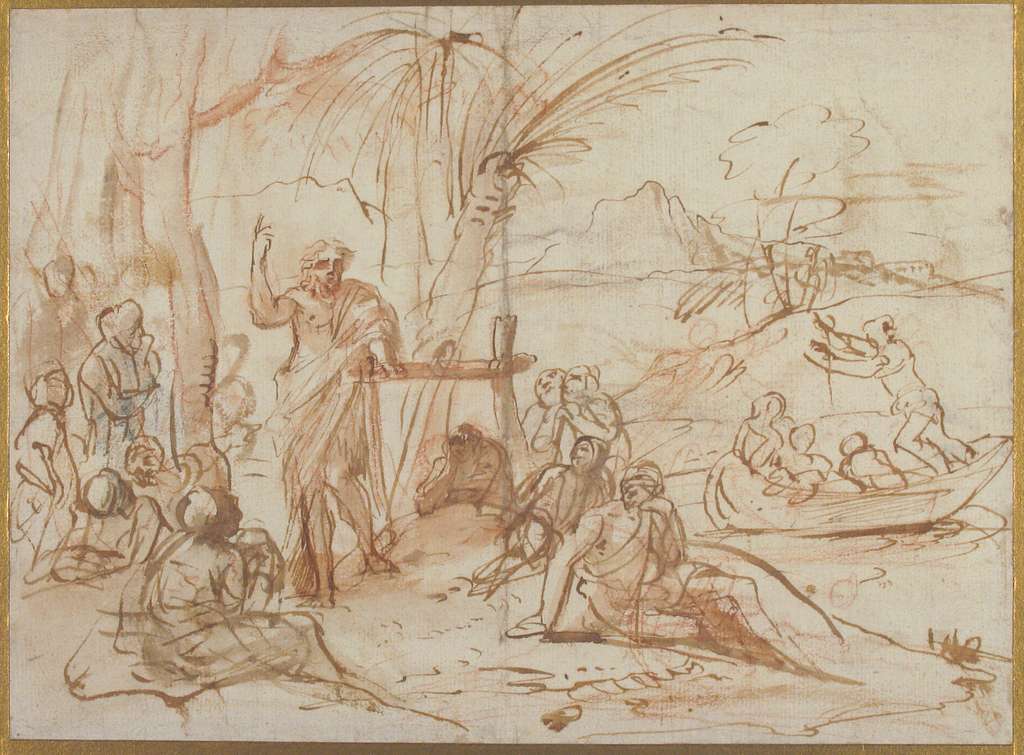 John the Baptist said this twice in the first chapter of the Apostle John’s gospel. The Apostle was a follower of the Baptist, along with his brother James and Andrew, the brother of Peter. All of these men were fishermen by trade.

And then along came the Son. The sighting of Jesus prompted this declaration and the call of these original disciples.

The Baptist was a man who knew his place. He looked for the Savior, and when he saw Him, he had to direct people to Him.

John was sent to be the mouth of God, to be the Voice in the wilderness. His sermons to those who listened are summed up in these words:  “Prepare the way of the Lord.”

Like Jesus, he was a miracle child born to an aged couple from the hill country of Judea. His parents were Zacharias, a member of the priestly tribe who served in the Jerusalem Temple, and Elizabeth, who long suffered under the reproach of her childlessness.

This couple stood among the faithful ones who continued to follow the practices prescribed in the books of Moses and the organized Temple activities arranged and implemented in the days of Israel’s kings, David and Solomon. Zacharias was fulfilling his duty in offering incense in the holy place when the angel Gabriel revealed the promise of John’s conception and birth and life’s work. A group of worshippers waited for Zacharias and marveled at his muted mouth that resulted from his angelic encounter.

Months later, the Baptist would be born, and Zacharias’ tongue was set free to proclaim the mission of his son. The days of silence ended with shouts and the noise reverberated through the hills where a remnant still watched and waited for the move of the hand of the God.

The little flock of true believers should be celebrated. Despise not small things. Their faithfulness, the fruit of holy stubbornness, preserved a sense of expectation for the coming of the Christ.

John the Baptist prepared the way for the One who would take away the sins of the world. His lifestyle and his preaching stirred people in Judea. In obedience, he soaked and tilled the soil of dry and brittle hearts, the hearts of a people who felt oppressed and forgotten by the Lord. Their land was controlled and occupied by the heathen Roman Empire. Their place of worship managed as a religious bazaar focused on profiteering rather than praises to Heaven and prayers for people from all nations.

John appealed to consciences still tender to the touch of God. He bid them to come and be baptized in the water and be made clean of the defilements and plague that sin has brought upon them. He surely was a sight to behold with his camel hair and leather vestments – garb that was far removed from the bright and costly priestly outfits fashioned according to the designs delivered in the latter part of the book of Exodus. Locusts and wild honey sustained him.

The Jordan River was his baptismal.

The waters washed the baptized in one sense, but only to make them ready for the fire and the Spirit. Click To Tweet

This river still carries significant status in the story of the Bible and the record of God’s chosen people. It is the same river that opened to the Israelites and ended their generation of wandering in the wilderness in Joshua 3-4. The waters stood at attention once the priests carried the Ark of the Covenant into the midst of the river. The Jordan’s flow also washed away the leprosy of Naaman the Syrian, who dipped in the waters seven times according to the instruction of Elisha the prophet (See 2 Kings 5). One day, as described by the prophet Ezekiel, holy waters will spring from the Temple at Jerusalem and commingle with the Jordan and carry out healing, purifying power to all parts of the earth (see Ezekiel 47).

Oh, what a day that will be.

A different chapter in the history of the Jordan was being established by John. He told the people to come to those waters and discover the entryway for another kind of freedom, the freedom and release of forgiveness, a way that leads to the Promised Land of peace in the Person of Christ. The waters washed the baptized in one sense, but only to make them ready for the fire and the Spirit. This next “baptism,” delivered through the Son, who is the Lamb, would fuel them in holiness and righteousness.

Friend of the Groom

John’s baptism of water did much for those who heard, turned, and came to the river. He created quite a stir and drew a number of followers. He bowed only to the Lord. Religion and government officials took note and sought to understand him and control him. He spoke out against King Herod’s violation of imperial law in the taking of his brother’s wife. This landed him in the royal dungeon and led to his beheading.

None of this surprised John the Baptist. He knew his place and his mission. Once, the Lamb came on the scene and the Spirit flew down upon Him as the Dove, John recognized the changing of the seasons. John’s disciples saw the burgeoning ministry of Jesus and expressed dismay to their leader. He shut their mouths with these words:  “The one who has the bride is the Bridegroom. The friend of the Bridegroom, who stands and hears Him, rejoices greatly at the Bridegroom’s voice. Therefore this joy of mine is now complete. He must increase, but I must decrease” (John 3:29-30).

We can learn from John’s example. He understood Christ as the Bridegroom and the Church as His Bride. All increase belongs to Jesus.

Can we say this to our own hearts? Jesus, it is He who must increase, we must decrease.

If this becomes our mindset, then we will see our purpose with clarity. We will recognize that there is Wedding Day coming, a glorious, majestic, holy celebration, according Revelation 19. It is the Lamb’s feast.

Our part is to deliver the invitations for this supper. Let’s tell people to come and be baptized in the Son by the Holy Spirit. Click To Tweet

Our part is to deliver the invitations for this supper. Let’s tell people to come and be baptized in the Son by the Holy Spirit.

The Table of Grace has been set here and now in anticipation of that marvelous supper to come. Many seats are empty, however. And they are empty for a couple of reasons.

One, we are often easily distracted and so we get up from the Table and go off to do stuff that does not feed our spirits and minds and hearts. Sit down with Jesus – do it every day; His mercies are new and He is faithful.

Other seats are empty because people need to be told about how God so loves them. Let us bid them to come to Him. As we let Him increase, this will happen. We will know Him and we will not be able to keep quiet about what He’s done for us.

We will say like John the Baptist, “Behold the Lamb.”