The Night Meeting That Changed Everything 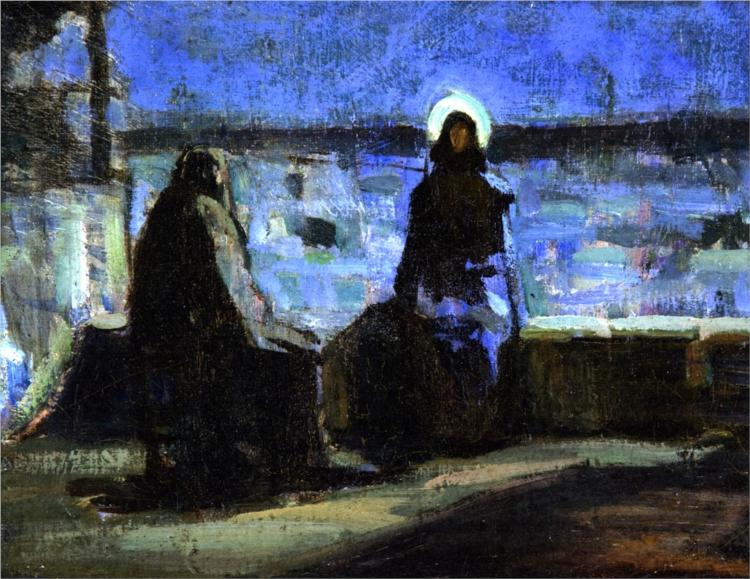 Nicodemus was a man of the Bible and a teacher in Israel. He saw and heard of Jesus. He ventured out of his world among the religious ones to speak to the Savior for himself. You might say it is because of what this man did one evening that we have a clear exposition of the mission of the Christ, the Son of the Living God.

What we know of Nicodemus is contained in a few paragraphs found in the gospel according to John the Apostle. This account of the life of Jesus on earth was released much later than the others written by Matthew, Mark, and Luke. John’s writing appeared late in the first century, in the 90s, and he supplied details and words that complement and complete the story begun in the other gospels.

This Pharisee, this man of the Torah, felt compelled to get up close and personal with Jesus. He chose to face the Son. Yes, he did arrange for the time of his encounter to come after sundown, at night; but that night would become full of Light, Light that came right from the very mouth of God.

Though he possessed a mind saturated in the pages of Jewish Scriptures, Nicodemus never saw what was coming as Jesus began to talk with him.

Nicodemus greeted Jesus and addressed the Savior as if he had already reached the right and proper conclusion about the Son. “We know that You must be sent from God, for no one could do what You are doing unless He be from God” (John 3:1-2).

These were nice words, for sure, and correct statements that Nicodemus had spoken. The man was at the beginning point of wisdom for it was obvious that he feared the Lord. He was in awe of Jesus. He revealed a decent measure of understanding and reverence.

In response, Jesus aimed at once and let fly the sharpest arrow of truth: “Unless a man is born again, he cannot see the Kingdom of God” (John 3:3). The sentence hit Nicodemus hard and fast. Staggered as he thought on these words, the Pharisee stammered with expressions empty and natural.

The way of the Kingdom had been made plain. Plain and simple things, however, can be among the most difficult things to grasp. Click To Tweet

The way of the Kingdom had been made plain. Plain and simple things, however, can be among the most difficult things to grasp.

As Nicodemus struggled to process this information, Jesus continued.

The true birth, the spiritual regeneration from Heaven, comes as the wind comes, the Lord said. It may arrive as a gentle breeze or a sudden gust or as a hurricane blast. The wind moves and it is felt. It is unseen and its origins untraceable, but the results of the wind’s coming are revelations and unveilings and demolition. Dust is scattered. Trees sway. Walls fall. Clouds are carried about.

Jesus and His Message blew into the world along the exact lines of the prophecies that were given to the people of God. The clues that related to His appearance and the Kingdom He would bring with Him were told aloud and written down to be heeded and treasured.

Give Nicodemus credit for following the tug that pulled at him. He paid attention and chose to investigate. He thought to interview Jesus and wound up making himself the object of the interrogation.

Yes, he did this in the dark. Still, Nicodemus sought Jesus. His was a step of faith, even though it was not as audacious and demonstrative as Peter’s walk among the waves.

This religious leader, a man with a very well respected reputation wore his heart on his sleeve for these moments.

And Jesus gave Nicodemus great love, and in so doing the Lord set forth for us the very definition of love.

John 3 is such a telling and precious chapter for us because of the love that it explains. A good deal of ground regarding redemption gets covered in this one evening’s conversation.

Jesus detailed for Nicodemus where He came from and where He was going. He explained that He was from above, that He had come from the Father, and that He was destined to be lifted up, lifted high as was Moses’ brass serpent of healing in the book of Numbers. The term “lifted up” spoke directly to the reality that would be His death in the Cross. Those who look to the Son lifted up find life eternal, Nicodemus was told.

All of this would happen for one primary reason:“For God so loved the world that He gave His only Son, that whoever believes in Him should not perish but have everlasting life” (John 3:16).

I can imagine Nicodemus stilled and rendered tongue-tied by all of this. He was told straight. Jesus used no parable with this teacher. The Lord had looked upon his heart and saw that this heart was tender. Jesus simply drove home the point of His presence on earth.

Following to the End

“A man must be born again.” The wind of the Spirit must catch the sails of our hearts and move them into the Light of life. The love of God must be allowed to carry us.

I believe Nicodemus experienced the wind of God and allowed the Spirit to change him. In the religious circles he moved in, Nicodemus attempted to speak a word of defense before the high priest and to those conspiring to arrest Jesus and arrange to have Him executed.

Also, Nicodemus was among those who witnessed the Cross and watched Jesus die. He along with Joseph of Arimathea, another Jewish leader and hidden follower of the Christ, took the risk and pain to claim His corpse from Pilate and the Romans so that Jesus would have a burial of dignity. He even leavened himself for the Passover by touching the dead Jesus and wrapping Him in the burial clothes with myrrh and other spices.

Only this Pharisee could have related these inside stories that we have from John. He surely became a believer and followed after Him along with the disciples. Hence, these things are told for us.

The Spirit blew away the dusty letters of learning that Nicodemus clung to for much of his life. Jesus sent out Light and Truth and a heart began to burn for Him.

God uses a variety of people for His purposes. Here was a man among the wisest of his day. He became one of the few wise ones to seek Jesus and to knock at the door that opened to the sheepfold. This wise man asked and was shown the narrow way.

Nicodemus came to recognize this Jesus as the Son of God and see Him as the Way, the Truth, and the Life that leads to the Father. He was born again unto life, and so must everyone who desires to see the Kingdom.