The Question of All Questions 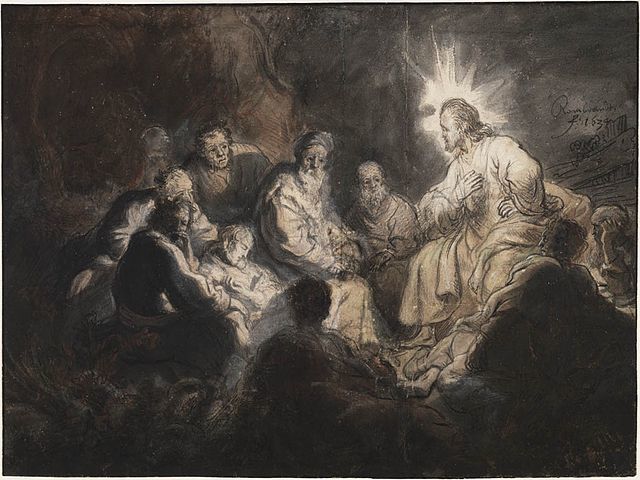 Jesus and His disciples took a trip to the seaside, to an area known as Caesarea Philippi. Near Mount Hermon and the large springs that fed the Jordan River, this place was given to religion. A variety of shrines, altars, and temples were erected there. The One so true strode among sites given over to false ways of worship.

It was in this place that the ultimate reality of Jesus was made plain. “You are the Christ, the Son of the living God.”  These words were given to Peter. He was blessed with a message from the Father; a sentence that remains the rock of truth upon which the Church is built.

We read about this time in Matthew 16. Jesus had become known. People were talking; they were in wonder about His origins and His designs. His words and His works captivated thousands. He spoke astonishingly and with an authority never heard before. He cured the leprous, the blind, the maimed, and the demon-possessed; even the dead were restored to life.

To some – the common people, the children, the tax collectors, the prostitutes among them – this brought joy. To others, Jesus presented a clear threat to their convenient and comfortable way of life. The Pharisees and Sadducees, controllers of religious and community life in Jerusalem and Judea, knew what He was saying and had witnessed many of the things that He had done.

This evidence did little to move this ruling class. They demanded a sign from Heaven, a validation beyond what they already knew to be true about Jesus. In other words, they wanted a savior that served them; one who would do their bidding. It was as if they were saying, “Jump, Jesus, and if you jump high enough, we will believe You.”  Unmoved, Jesus called them “wicked and adulterous,” and departed from them.

At Caesarea Philippi, Jesus posed a question to His followers: “Who do men say I am?” The disciples knew the word on the streets. Many recognized in Him the prophetic spirit of John the Baptist, Elijah, and Jeremiah.

Then Jesus asked this: “But who do you say that I am?”

These men had been so close to Him. They had heard more and seen more than the others. Had any of it sunk in? What thoughts filled their minds?

The proclamation from Peter settled the matter. They now knew clearly just who Jesus was and is, but they couldn’t tell anyone.  Jesus charged them to keep the information to themselves for the time being. At this point, He began to show them the road ahead for Him and for them. The Cross was in view. He set His face toward it, knowing the work that He had to finish with His death in order to complete the plan of redemption ordained from before the foundation of the world.

The “death” part of this discussion left the disciples dumbfounded, so much so that it seems as if they heard nothing else. Jesus also spoke of what would come beyond His suffering and His killing. He declared that He would be raised to life again on the third day.

The Resurrection reality became buried somewhat in their minds under the details related to the Cross. Click To Tweet

The Resurrection reality became buried somewhat in their minds under the details related to the Cross.

Naturally, Peter reacted at once, “Be it far from thee, Lord: this shall not be unto thee” (Matthew 16:22). Jesus addressed the source of Peter’s outburst right away, “Get thee behind me, Satan: thou art an offence unto me: for thou savourest not the things that be of God, but those that be of men.”  The one who, moments before, got a message from the Father had entertained and expressed one from the father of lies.

How fickle our faith can be! A glorious thought comes one minute and something totally contrary follows close behind it. It’s a part of being a flawed, fallen human being.

For this reason, we cannot make it without “Christ, the Son of the living God.”

The All in All of the Savior

The good news is that Peter kept at it. He received the rebuke from Jesus and walked on with Him. And I think it is because he held fast to the revelation given by God. He knew Jesus. Later, Peter would deny knowing Jesus at all, but Jesus met him after the Resurrection and restored him,  revived him, and recommissioned him in his calling as an Apostle.

It’s the No. 1 question He puts to each and every man and woman.  So many descriptions have been given by so many people. He’s viewed as a philosopher, an ethicist, a social justice leader, a civil rights champion, a prophet even, a good man who did good things.

Jesus is so much more. Jesus is all in all. His Name is the only Name by which men might be saved.

The passage in Matthew stands as the definitive one. Let us embrace it every moment.  Jesus is the Anointed One, the One come from above, the One who is the Way, the Truth, and the Life. He is the One who loves us, who gave Himself for us, and who shall never leave us.

He is Christ, the Son of the living God.