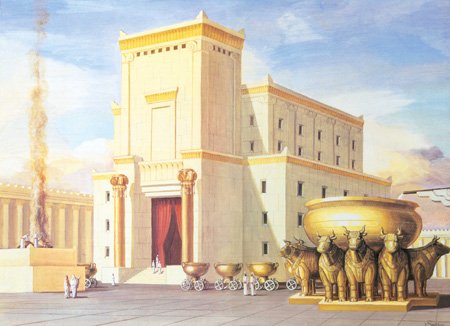 The Passover of the Jews was near, and Jesus went up to Jerusalem. And He found in the temple   those who were selling oxen and sheep and doves, and the money changers seated at their tables. And He made a scourge of cords, and drove them all out of the temple, with the sheep and the oxen; and He poured out the coins of the money changers and overturned their tables; and to those who were selling the doves He said, ‘Take these things away; stop making My Father’s house a place of business.’ His disciples remembered that it was written, “ZEAL FOR YOUR HOUSE WILL CONSUME ME.” The Jews then said to Him, ‘What sign do You show us as your authority for doing these things?’ Jesus answered them, ‘Destroy this temple, and in three days I will raise it up.’  The Jews then said, ‘It took forty-six years to build this temple, and will You raise it up in three days?’ But He was speaking of the temple of His body. So when He was raised from the dead, His disciples remembered that He said this; and they believed the Scripture and the word which Jesus had spoken.  (John 2:13-22)

As Jesus was introducing the New Covenant, he was constantly redefining the meaning of words, trying to reveal a new covenant understanding on an Old Testament concept. One of these concepts was the temple. In Old Testament times, it was the center of the Jewish spiritual life, since most of the ceremonies and rites were celebrated in and around the temple, itself. To the Old Testament believer, it was a very meaningful place and it molded and shaped the believers’ vision of God, Himself.

I took an Art & Architecture course in college, and we looked extensively at cathedrals and other Christian churches from the Middle Ages and beyond. Since people from the Middle Ages were ignorant of the language of the church (Latin) and did not have any exposure to places other than their own homes and fiefdoms, their only perspective of God came from the church or cathedral. As a result, the churches were made to create an awe-inspiring experience for each church goer as they attended church service or other religious events. The height of the ceilings and windows and doors, the gold and gold-plated icons and utensils, and the large statues of the various saints of old were an integral part of shaping the mental images of God and His closest friends! The cathedral/church has been patterned after the Old Testament temples in their magnificence.

In the above passage in John’s gospel, Jesus is now redefining the Temple and its role in the Christian’s life. First, He says it should never be a place of business (verse 16). We learn from scholars that the money changers were taking tremendous advantage of those from places far away, when they were required by Jewish law to pay the annual temple tax as well as to purchase any animal sacrifices such as turtle doves to be brought to the priests in the temple. This unfair treatment of poor outsiders can be likened to the way tax collectors would treat their constituency, charging exorbitant fees that they would keep for themselves. God’s house should never be used by anyone to profit from others’ misfortunes or naivete. It is a reminder of the concern Jesus showed to the children (innocent ones) in Matthew 19:14 to not hinder them to come to God. The temple must be cleansed of this evil!

Once the Pharisees challenged Jesus on the authority He was exercising to make this scene in the temple, Jesus made an extraordinary statement about the temple being destroyed and rebuilt in three days. Of course, they did not understand what He was talking about, but we now understand from other New Testament Scripture that He was changing the meaning of the temple to the body, first His body, then the believer’s body. The temple of the old covenant, a large structure set apart for worship of God, was no longer the temple in the new covenant. According to John 4: 20-24, the place of worship was no longer the important issue, but rather the heart behind the worship, within each believer, the new covenant temples. In verse 21, Jesus made the following statement to the Samaritan woman, “Woman, believe Me, an hour is coming when neither in this mountain nor in Jerusalem will you worship the Father.Jesus later emphasizes in verse 24, “God is spirit, and those who worship Him must worship in spirit and truth.” Worship was now to be defined according to “spirit and truth” and not ritual.

How much do we emphasize the place of worship over the inner quality of that worship? For many traditional Christians, if the church didn’t have a steeple with an organ and stained glass, then it wasn’t really a church, and the lack of these physical things would negatively affect their sense of being in God’s presence. But Jesus was trying to teach that the physical characteristics of a place of worship or a particular location are not what really matters. The Greek word for worship, “proskuneo”, literally means to blow a kiss to show respect or homage. The basics of worship are not inherent in the physical place, but the hearts of the worshippers. These are the ones the Father is seeking!

The Archbishop of Canterbury in 1941 was William Temple and he made this statement about worship: “for to worship is to quicken the conscience with the holiness of God, to feed the mind on the truth of God, to purge the imaginations by the beauty of God, to open the heart to the love of God, and to devote the will to the purpose of God”. Many have this idea that worship is the time we sing in church, led by a song leader, and sing familiar Christian hymns and contemporary songs. The biblical premise of worship is that it is so much more than that, encompassing our life beyond the time in church services. It involves the way we live our lives!

Bought with a price

All things are lawful for me, but not all things are profitable. All things are lawful for me, but I will not be mastered by anything. Food is for the stomach and the stomach is for food, but God will do away with both of them. Yet the body is not for immorality, but for the Lord, and the Lord is for the body. Now God has not only raised the Lord but will also raise us up through His power. Do you not know that your bodies are members of Christ? Shall I then take away the members of Christ and make them members of a prostitute? May it never be! Or do you not know that the one who joins himself to a prostitute is one body with her? For He says, “THE TWO SHALL BECOME ONE FLESH.” But the one who joins himself to the Lord is one spirit with Him. Flee immorality. Every other sin that a man commits is outside the body, but the immoral man sins against his own body. Or do you not know that your body is a temple of the Holy Spirit who is in you, whom you have from God, and that you are not your own? For you have been bought with a price: therefore, glorify God in your body. (1 Corinthians 6:12-20)

Paul is trying to expound upon the revelation of the body being the temple in this passage. In verses 19-20, he asks if we know that our body is the temple of the Holy Spirit, that we no longer belong to ourselves because Jesus Christ purchased us at Calvary. This is a reality that he wants us to understand and therefore live by, glorifying God in our bodies. The new covenant believer recognizes that his spiritual lifeis lived before God in thebody, and he is to treat his body as he would any holy place of worship. When Jesus began turning over the tables of the money changers in the temple, he was symbolically speaking to us that we must also turn over the tables of the money changers in our lives and recognize the holiness that God intends for us. And how is this to be possible?

Paul indicates in verse 12 that we decide for ourselves what is lawful and what is not lawful for us, the standards we are to live by. Those standards allow us to live lives that are profitable (advantageous, to our benefit) and keeps us from being mastered by some unseemly behavior. By recognizing the higher standards that God has decreed for all believers, we are joining ourselves to the Lord and become one spirit with him (verse 17). The evil of the money changers is represented by our self-centeredness and the standards of God free us from the bondage of all that is manifested in our lives from self-centeredness.

In Ezra 5, the Jews that had been allowed to return to Jerusalem were desirous to rebuild the temple that Nebuchadnezzar had destroyed seventy years earlier when he took many into captivity to Babylon. They had met much opposition and King Artaxerxes of Persia had issued a decree stopping any building of the temple. When Darius became King of Persia, the Jews began rebuilding the temple again and Darius was sent a letter about the situation from Tattenai, the governor of the province, indicating that this rebuilding had been ordered by a previous king of Persia, King Cyrus many years earlier. Cyrus had taken the gold and silver utensils which had been taken from the temple by the Babylonians upon their capture of Jerusalem and put them in the hands of the Sheshbazzar, the appointed governor of the province at the time. It was hoped that the Jews would be allowed to complete the rebuilding if King Darius would confirm King Cyrus’ decree from many years earlier. And in Ezra 6, we find out that Darius did find the decree within the archives and approved the work in Jerusalem.

In Ezra 7, we see Ezra as a man skilled in the law of Moses and he was given permission by King Artaxerxes to return to Jerusalem with a few followers to reestablish God’s work in Judah. The passage tells us that “the hand of the Lord his God was upon him.” Verse 10 also reveals that his heart was set to study and teach the Word of God. Ezra is a type of Jesus Christ, sent to the Jews to teach the Word of God and to live it! The rebuilding of the temple is led by Jesus and His Word.

The discipline of the Lord

The writer of Hebrews explains the importance of God’s discipline in the believer’s life in Hebrews 12:5-11. The Greek word translated discipline in this passage is “paideia” and it means training and instruction with the intention of raising virtue. In Hebrews 12:10, the discipline of the Lord is intended to allow the believer to “share His holiness.” The new covenant is designed to bring us into deeper fellowship with Jesus Christ and His discipline is a necessary work of God in our lives to bring about “the peaceful fruit of righteousness.” Without this training, we are only illegitimate children (Hebrews 12:8).

The foundation of the temple, the precious cornerstone is meant to be Jesus Christ, Himself (1 Corinthians 3:11) and this building is a work of God (Psalm 127:1) and supported by other like believers (1 Corinthians 12:27-28), growing together into a holy temple in the Lord. When believers come together in agreement that Jesus is the center of their lives, then their temples become a temple, speaking of the universal church of believers, the body of Christ and Jesus leads His work in the new covenant age through this holy entity.