The Thirst of the Savior 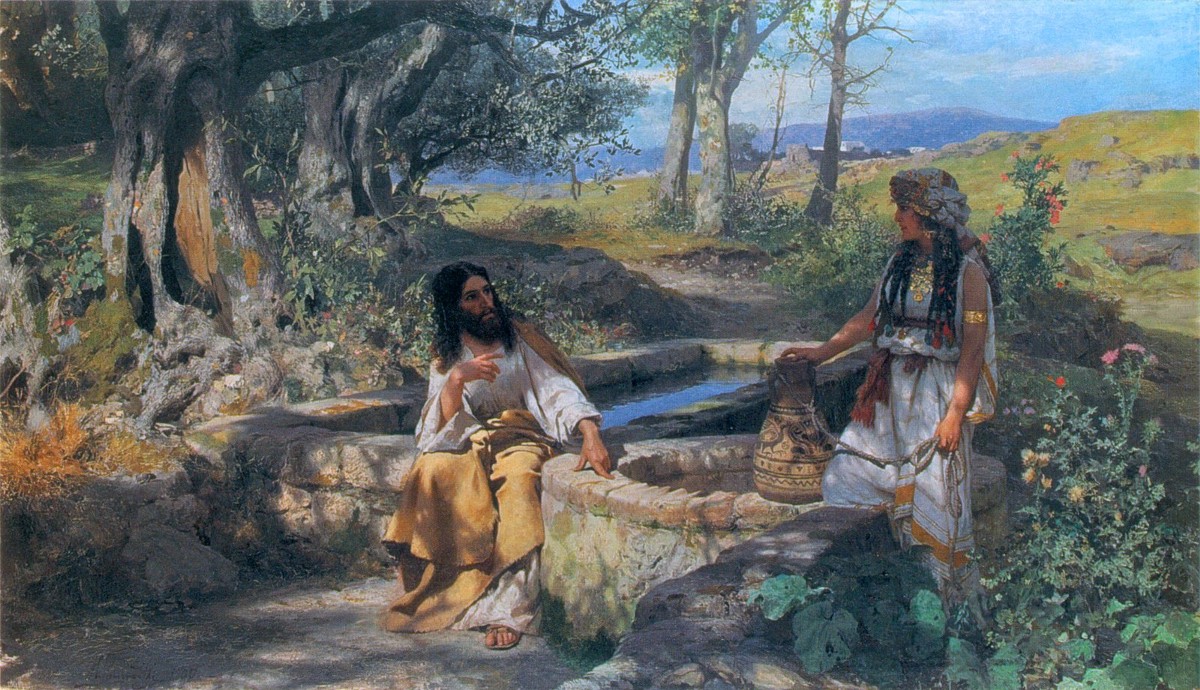 Jesus sat down by a well and asked for a drink from a woman, a Samaritan woman who was strangely coming for her water in the middle of the day.

The sun was high and the weather dry. This had to be a laborious chore for her. As we read on, we discover the reasons behind this practice of hers.

Jesus’ request added to the burden she already bore on that day:  “Give Me a drink.”

He was thirsty. He really could have used a drink of water just then. He was thirsty in more ways than one, however.

His encounter with this woman would make a beginning for His saving work on earth. Just two chapters earlier He did something marvelous at the request of His mother Mary. He rescued a wedding feast with miracle wine made from water. He made sure the thirsty guests in Cana had plenty to drink.

Jesus did something even more marvelous at this well. Amazing grace was sounded out. He eventually told this woman something He had told no one before. He would reveal Himself to the full. It was she who first got the message about His true identity as the Messiah. And she heard this message from his very lips.

Would she receive the testimony of Jesus? Would she take up His offer of living water?

He spoke directly to her and unveiled her deep problems and brokenness. He seemed to know everything about her. There was nothing left to hide behind. Her midday water run may have been an effort to maintain a low profile, invisibility in the midst of gossipy neighbors who continually bore tales about her. The less she was seen the better it went for her.

The Son of Man thirsted for her freedom. He wanted the psychic chains that fettered her soul to fall away.  He longed to puncture the bubble of self defense mechanisms she’d inflated around herself.

“Go get your husband,” He spoke. That did it. The arrow pierced the woman’s calloused heart. The fresh wound made it impossible for her to tell a lie just then.

“I have no husband,” she responded. I think Jesus smiled. He had a fish on His hook. A bit of truth, a moment of confession told of her need and her desperation. She was weary and weighed down by the charade of her existence. In a real sense, His conversation tore the veil that lay between her and real righteousness. Glory had come out to meet her. She was in the Presence of the Lord, as she would learn soon enough.

Salvation moments, Jesus drank them up. These times buoyed Him. They lifted Him and He walked upon the stormy seas of faithlessness and power madness that dominated the atmosphere. Click To Tweet

For Jesus, the exchange was full of Spirit and Truth. His mission on earth was to seek and save the lost. This would be bread for Him. The disciples went to get Him lunch. He had sat down to enjoy a feast. The moment was a taste of the new wine as it flowed into a new wineskin.

Salvation moments, Jesus drank them up. These times buoyed Him. They lifted Him and He walked upon the stormy seas of faithlessness and power madness that dominated the atmosphere.

His cup of suffering would be bitter to the last, as we can read in the Cross stories of the gospels. He did stagger at thought of drinking that cup in the Garden of Gethsemane.

These winning moments, however, were the joy set before Him, a taste of what the offering of His life would accomplish. He was refreshed and His heart for sinners was warmed as He led them along the narrow way that leads to life.

“I thirst.” This is listed as the fifth of Christ’s seven sayings from the Cross. He said this and one of the Centurions lifted a sop soaked in vinegar to His lips. That thirst at the Cross was a thirst for completion. There were words to be fulfilled. Every bit of the mission of Immanuel required accomplishment. He had swallowed down the full cup of suffering — He drank it whole. He felt the forsakenness as He was made sin for all. The darkness of loneliness enveloped Him. He could only rest in the Word. He poured forth the psalm of His passion. “My God, my God why have you forsaken Me?”

Why was He forsaken? We were the reason. His thirst for full fellowship with us was what moved Him to come, to take on our flesh, to walk our streets, to endure the curse of death and triumph over it. He did this for us. This was and is the motivation of “so” love. Through so-loving the world and being lifted up from the earth upon the Tree, He could draw all men to Himself. To open the Garden gate, to tell the cherubim to draw back the flaming swords and make way for us to come to the Tree of Life.

What was Jesus thirsty for? Not power on earth for sure. He could have had it at any moment. The bread-eaters of John 6 murmured and contrived about how they could set Him up as their provider and champion. With frenzy, they imagined that they could make Him a world ruler. He hid away so as to not get swept up in their foolishness. The machinations of this world grind away. People get so geared to fast answers and easy solutions.

The Savior understood the way to His Throne. What lay before Him was a dark road that only He could walk. The road would take Him to death and beyond it.

Jesus gained full and total authority at His weakest human moment. Battered, bleeding, scarred, pierced, and pained, He tasted the vinegar and announced:  “It is finished.” He committed His spirit to the hands of the Father. He dived across the divide. He fulfilled all things. He met death, death that had made Him weep and groan at the grave of Lazarus. He defeated death. Corruption and decay could not touch Him.

He thirsts no more. His victory is marked by His seat at the right hand of the Father. The Lamb slain is alive forever. And His Spirit makes us alive forever.

He now invites all to come to Him and enjoy His presence.