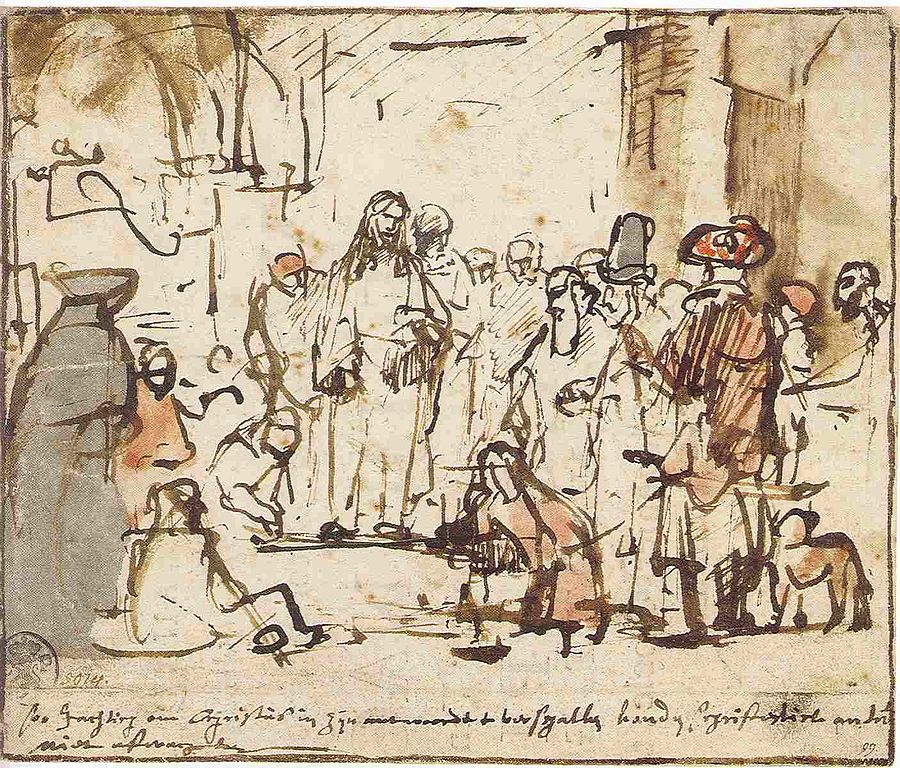 Jesus became a target for the religious leaders of His time on earth. It was mostly because of what He said. His message of love and forgiveness was bad for business. Really, it was.

The Temple at Jerusalem was the place where people came to get right with God for the wrong things they had done. There was a steady flow of those who came to say that they were sorry and they were willing to pay for the opportunity to do so. The list of violations that required offerings was updated and elongated constantly. The religious crowd never missed a trick when it came to pressing the people to bring their money to them.

Jesus, however, stood in the midst of them and bid people to come to Him and find freedom and forgiveness. He called Himself the Good Shepherd, the Door to the Father, the Giver of Living Water.

There was one scene that brought wrath out of Him. It was the Temple compound, where a big time religious market had been set up and the sales there were brisk. His zeal for true righteousness flamed out.

He made a small whip for Himself and drove the sellers and buyers from what was supposed to be “the House of Prayer for all nations.” He upended tables, yanked open animal cages, and sent coins flying. These practices that promoted self-righteousness were things that really made Him burn.

Frustrated and fearful, the Temple leaders plotted to get rid of Jesus. An arrest party was dispatched. But the soldiers found this Son of Man as untouchable at that moment. He talked and they could not bring themselves to apprehend Him.

“No one ever spoke like this man,” they reported.

A Woman and a Mob

Just how did Jesus speak? The beginning of John 8 gives us a good picture of this. In this chapter, we read that Jesus had come back to the Temple, the same place where He had caused all the commotion. The people came and sat before Him. He taught, they listened.

The morning lesson was interrupted on this day. A woman was thrust down at His feet. A mob of stone-carriers crammed the place. They were agitated and ready to shed blood.

“This woman was caught in the very act of adultery,” came the accusation from the Pharisees in the group. “By the Law of Moses, we are to stone her. What say you, Teacher?”

Mercy rejoiced against judgment. I believe Jesus delighted to say these words, words that only He could say: 'Neither do I condemn you. Go, and sin no more.' Click To Tweet

Jesus was being put on the spot. He, in fact, had declared that every Word of God was true and eternal. He did say that His mission on earth was to live out that very Word. He determined to fulfill every bit of the Law down to the last jot of it.

His response was silence. He looked at the woman and the mob. He did not stand tall for Himself and the Law. Rather, He stooped to the dirt. He brought Himself to ground level, he was right there with the accused one when He put His finger in the dust and began spelling out something — words that remain unknown even to this day.

The loud voices pressed Him. There were demands for Jesus to make a pronouncement. The accusers questioned His fidelity to the commandments.

And so He spoke as no man had ever spoken:

“Let the one without sin cast the first stone.”

Those words spoiled the party at once. A hush came; there was a silence but it soon began to break. The dull thuds of falling rocks were all that was heard. The oldest among them dropped their stones first.

“Your accusers, where did they go? Does none stand to condemn you now?” He asked.

“No one, Lord” she responded.

Here, mercy rejoiced against judgment. I believe Jesus delighted to say these words, words that only He could say:

“Neither do I condemn you. Go, and sin no more.”

Only Jesus could tell this woman what she needed to hear.

This remains true to this day.

We all come to Him. We get beat up by others, and we beat up ourselves. Accusations fly all about us, don’t they?

Jesus talks to us like no one else talks to us. Praise the Lord! There is therefore now no condemnation (Romans 8:1). We can come to Him and we can go and sin no more. His Spirit will teach us how.