The Way of Our Priesthood 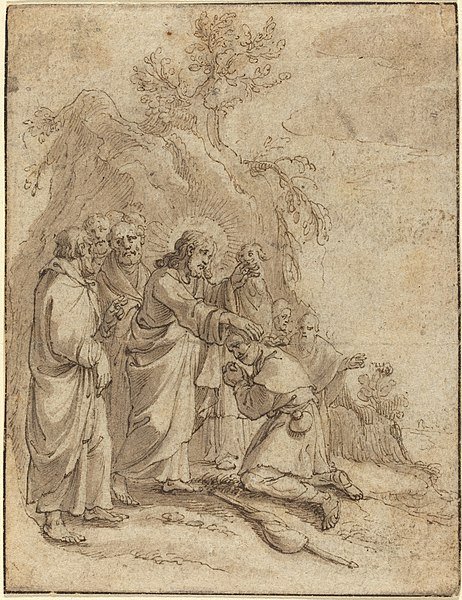 The sick and the poor – Jesus said they would be with us, always. And they remain with us to show us the heart of God. And sometimes we are sure to find ourselves among the sick and the poor and in need of help from a “priest,” from someone called to serve in the purposes of the Lord in love and prayers and offerings and ministry.

Who makes up this priesthood? It is comprised of all of us who call ourselves followers of Jesus.

We are to serve Him and to serve others, to love Him and to love our neighbors, to pray for our friends and for our enemies, even the worst of them who do violence and mad persecutions.

The Holy Spirit has anointed every Christian for this role in the world and by the Spirit’s power we are equipped to help the poor, the sick, the lost, and the lonely.

Think about those whom were often at the table with Jesus. He sat down to eat with the outcasts. Sinners, weak and wounded, were the ones He befriended. This pattern of His brought scoffs from the religious practitioners of the time. It was real evidence of how far they had distanced themselves from the purpose of God. They had derived certain conclusions about why some found themselves in defeat and desperation, plagued and crippled, blind and mute.

In the minds of this cadre of scorners, people got what they deserved. The philosophy of life they held rested on something akin to the concept of karma – do right and all will be right with you and yours, do wrong and you and yours suffer the consequences.

Even the disciples of Jesus thought this way in a measure. See John 9 and the story of the born-blind man who sat as a beggar near the Temple of Jerusalem. “Who sinned that this one is blind?” they asked Jesus, “this man or his parents?”  The Savior flipped the narrative for them. “Neither, he was born this way so that you might witness the glory of God.”

That glory manifested itself as Jesus spat on the ground, took mud, and smeared it on the eyes of the blind man. He was told to go and wash off the mud, and then his eyes were opened as he obeyed the command of the Lord.

Here’s the mud in our eyes: the ridiculous assumption that pain, poverty, and suffering exist only because of personal irresponsibility. This mindset fails to recognize the stain of sin that colors everyone and everything connected to humanity.

Paul devoted his letter to the Romans to the explanation of how “all have sinned and come short of the glory of God” (see Romans 3:10 and Psalm 14:3). Depravity is the theological term for it. It is the essence of sin in our natures, natures that were passed on to us as descendants of the original man and woman who were formed and placed in Eden long ago. Their turn from the single prohibition given to them by the Lord, their Creator, stirred a notion of self-centeredness that lingers down to our day.

Care for the Sick

These leaders who questioned the company that Jesus kept claimed to understand the Scriptures. We can see that they knew little of what’s written in Leviticus. In particular, Chapters 13 and 14 of this book of Moses detailed the duties of the priests and Levites connected to the service in the Tabernacle. And those duties included getting up close and personal with sick people, with very sick people, in fact. For God assigned the care of lepers to those chosen for ministry in offerings, sacrifices, and worship.

Leprosy was a terrible scourge, an infectious plague that affected the surface of the skin and at times progressed deep into a person with affliction that spread to nerves, joints, and limbs. Just the hint of a skin problem was enough to require examination from the priests.

The servants of the Tabernacle were given details to guide their diagnoses. They were to exercise discernment. One classified as leprous was sent away from the community, labeled as unclean or infectious, and commanded to announce their uncleanness whenever they approached others.

Lepers really were the sickest and poorest of people in the days that Jesus walked on earth. Christ refused to ignore them, however. He told the religious crowd that the sick needed Him most. Those who fail to recognize their own “leprosy” – the plague that diseased their hearts – He said, were ignorant of the cure that only He could offer them.

Leviticus explains that there are other brands of leprosy. One kind of leprosy is the mildew that splotched the warp and woof of garments and fabric. Perhaps, like me, you have dropped a sweaty T-shirt in a corner and then forgot about it for a couple humid days. Upon finding this shirt you may notice are variety of greenish, brown dots about it. This is mildew and it is permanently a part of the threads in the garment. No amount of bleaching can return it to its clean condition. It is trashed, diseased.

Mold in the walls of a house represents another form of leprosy. Spores form and multiply in places made moist and wet for a period of time. These spores can agitate the immune systems in us, bringing allergic reactions, sometimes debilitating ones. Mold remediation is important for real estate restoration and maintenance.

All of these forms of leprosy were supposed to be noticed and attended to by the men the Lord assigned to His tent of meeting, to the place where He manifested His presence and glory. This was God’s call upon the Levites, in particular, among the tribes of Israel.

This was also a general call upon the whole of this nation of chosen people. From the Lord to them came the oracles and commandments. These ordinances, some 600 of them, were given so the nation would become a community of priests.

God would deliver His words to them and so they were to live by these words. And in living by these words the other nations, which He also brought into being, would learn the reality of the Lord, the God who can be known.

And among the ways that God chose to reveal His holiness, His beauty, and perfection in all things, was to allow for sickness and disorder and disfigurement. Israel experienced slavery and bondage so that they would rejoice in the freedom and take up the responsibility of communicating the power of Yahweh, the God who is, the “IAM THAT I AM.” This personal Lord is the Lord of revelation. He shows Himself and He talks of Himself and He tells the truth about life in His universe.

The Lord gave Israel a mission to all the earth, a mission to live by God’s Word and reveal what can happen in a culture that gives place to Him. This was His purpose for them.

God, however, rose up a remnant from among Israel, the Apostles and disciples, and then had them carry His Light to the darkness that plagued the world. And so He formed His Church, a Body of believers against which the gates of Hell cannot stand. Click To Tweet

Did the nation fulfill this calling? Sadly, the people were stubborn and disobedient and blinded, so blinded that they rejected the Son of David as King and had Jesus crucified.

Jesus wept as He approached Jerusalem because understood the reception waiting for Him:  “And when He was come near, He beheld the city, and wept over it, saying, If you had known, even you, at least in this your day, the things which belong unto thy peace! But now they are hid from your eyes” (Luke 19:41-42). Disaster did befall the city and its people because of their ignorance of Him and His visitation.

God, however, rose up a remnant from among Israel, the Apostles and disciples, and then had them carry His Light to the darkness that plagued the world. And so He formed His Church, a Body of believers against which the gates of Hell cannot stand.

We are priests in His mission. We are living temples filled by His Holy Spirit. We are ones called to speak for Him, to care for the sick with His healing balm and to make rich the poor with His treasures of Truth.

Let us lift up the Name of the Lord in all that we do.