The Way of the Lamb 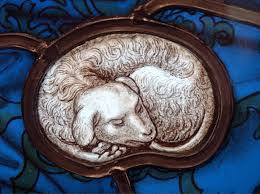 God took down Egypt, a wealthy, powerful empire. He did it with series of plagues. Water was turned into blood. Frogs multiplied uncontrollably. There came swarms of gnats and lice and locust. Cattle fell dead from disease. Boils broke out on the skin of the people, and hailstones of fire fell from the sky.

These were spectacular displays of power from the Lord. He orchestrated them all through the voice of Moses, His prophet. Pharaoh saw the ruins of his domain. There were moments when he seemed ready to bow before the power of the Lord of Israel. Still, he refused to set free the people of God. His pride made him hard and immoveable.

We have heard the story from Exodus and have perhaps watched movies about it. “Let my people go,” Moses would proclaim, as Pharaoh stood his ground, determined to prove his authority and that of his gods.

These things, therefore, set the stage for the final two plagues – darkness and death. This makes sense to me because everything in our Creation comes down to Light and Life.

Our Bibles begin this way: “And God said, Let there be light, and there was light.” The Voice of the Lord brought definition to what was at that moment formless and void. God broke the darkness with His Word.

In Egypt, darkness swamped the dwellings of Pharaoh and his subjects. It was a shadow that could be felt. Nothing could be seen and none moved for three days. But among the people of God, in their homes, the candles burned. They had light because the Lord was with them.

Did this turn the heart of Pharaoh? It did not. He still stood in his defiance to Moses and the Lord who had sent him.

Moment of Life and Death

This brought forth the ultimate moment of life and death for Egypt and for Israel. God was coming to smite dead the firstborn of all the land. It would be another dark season, an even deeper darkness than what had come before. This dark time would be felt as well; it would be felt in the sorrows penetrating into the hearts of those who looked upon their dead.

To His people, however, God gave Light. He communicated the secret that would bring them through this visitation of death.

For hundreds of years, Israel lived under bondage. Mud and bricks, sweat and toil were all that they had known. They groaned under the weight of their state as slaves. God heard, and God sent Moses to lead them. The moment of release was upon them. The Word came to them: “Do this and live.”

The secret to all of it was this – the Lamb.

This would become the mark of life. Everyone inside a home with the blood upon it was saved from death. These homes would be passed over. Click To Tweet

Death would invade the Israelites’ world. There was only one way to stay safe and alive. They had to follow the Light that they had been given. All about them would be darkness; they had to hold to the truth and follow its orders.

Take a lamb from the flock the Israelites were told. This young, small animal was to be without blemish. Watch the lamb and care for the lamb for 14 days, God said.

The lamb, prepared and ready, was then to be slain. A ragged branch of hyssop was to be dipped in the blood, and that blood was then to be applied on the home’s doorposts.

This would become the mark of life. Everyone inside a home with the blood upon it was saved from death. These homes would be passed over. They had to choose the way of the lamb to secure their lives. They had to exercise faith in the words spoken to Moses by God.

This is the secret to life – the Blood of the Lamb.  God gave this secret to the people of Israel and soon their long season of bondage was over.  Passover, a celebration of remembrance for this day of deliverance, remains the most important feast on the Jewish calendar.

There were no other ways of escape. The path to life and freedom for Israel was a narrow one, a way involving something so small and seemingly harmless. A lamb possesses no claws and no sharp teeth with which to tear and wound. Gentle and quiet, the lamb was chosen to be an offering; its blood meant to be a sign.

“Paint the blood on your door and live.” Those were the instructions that Israel followed. At last, they were free from Egypt, being led by the cloud and fire of God’s presence.

We know this secret, too. We know it in the New Covenant way, for our Lamb took upon Him flesh and bone like ours.

John the Baptist announced it in John 1: “Behold, the Lamb of God, who takes away the sin of the world” (see John 1:29). John and Andrew heard these words and they heeded them. They followed Jesus for the rest of their lives.

It really is a simple message that we carry. The Lamb, Jesus Christ, gave His life for us all. His Blood covers us. Death has no claim on us – just as it had no claim on those Israelites hiding behind blood-stained doors.

This is the season of Easter. We focus on the significant moments that happened toward the end Jesus’ 30-some years on earth. The gospel stories should be like gold to us. We cannot read them enough.

Behold the Lamb in these stories. See Him lifted up for our transgressions. See Him alive again from the dead, holding forth His hands and saying, “Peace be unto you.”

A lamb with its blood – that’s all an old Hebrew family needed to find rescue.

The Lamb of God, He’s all that we need for salvation and sanctification. He gave His life for us and took that same life back again. Now, He ever lives to intercede for us at the Throne of Mercy.