We Marched and Prayed 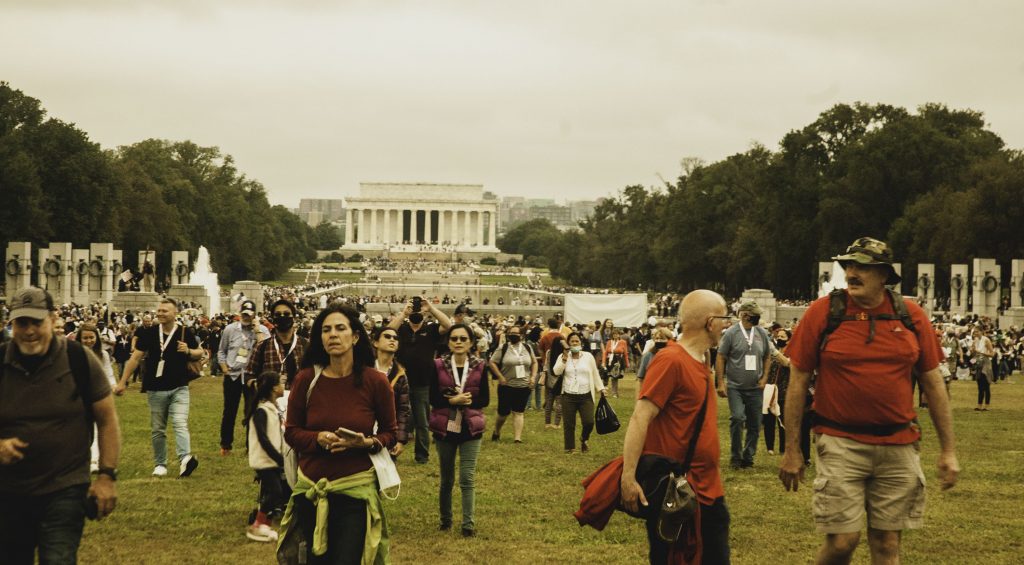 We saw the body of Christ — standing, singing, moving, walking — and yes, praying. We went on the prayer walk at the D.C. Mall.

The question came up to me at the onset of the march; would we walk and observe or would we pray? There was prayer, much prayer. 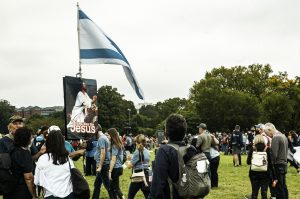 Tears welled up in my eyes as our Vice President spoke and prayed to start us off. We were instructed to connect on our cell phones with the March leaders. For our little group, however, it did not seem to work. We were on our own with God and each other. He was enough.

Along the 1.9-mile course, which became 3.8 miles because of zig-zagging, hundreds of small groups stopped, circled and prayed together, sometimes raising holy hands and praying out loud. Here was a group from a certain church, their Pastor was leading them, then a group of six or fifteen, holding hands.

I saw a group of teens, hands on each others’ shoulders, huddled and praying fervently. It brought tears to my eyes.

The massive assembly walked steadily from memorial to memorial. The day was beautiful, not a drop of rain, and cool for the hike. 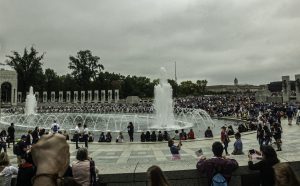 At the War memorial, some were kneeling. Here I first noticed short poles with a chain between, surrounding the memorials. Our path seemed to always have to go over these, and my legs were barely able to lift to the chain level. But, many complete strangers rushed spontaneously to help me over. Again and again. It touched me.

In our small group of seven, we prayed diligently, following guidelines suggested on the back of our “2020 Prayer March” tags, worn around our necks. My turn at praying always was accompanied by a sense of brokenness, as were the others.

We witnessed many groups carrying signs, the majority uplifted the name of Christ. Some 2000 students from Liberty University wore their shirts. Some other folks were giving out a tract, a lady gave us a book, a man was simply preaching the gospel to all passers-by.

A few brothers had the long trumpet-like Jewish horn, and were blowing it.

The Washington Monument took our breath away, seen up-close — a giant finger pointing to the sky. We prayed here for lost souls, and families.  Some were placing hands on the monument and praying. We were half way now. 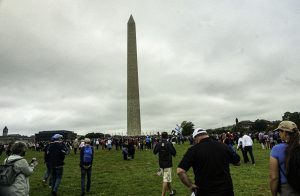 Here, I realized I was tired, my hips started a small ache. No big deal, I pressed on past the Monument.

We passed the White House, seen from a distance, prayed for the President and Vice-President and their families.

We passed the National Museum of African American History and Culture.  We prayed for healing of communities torn by violence. 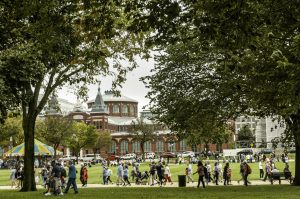 Then came the National Archives. I had forgotten my snacks which I left at home. I had my water bottle and carefully sipped it. For one year I have taken up hiking, without this pre-training I would not have made it. I found I was praying less now and just trying to get done. But others were still going for it. Some brothers and sisters were holding us all up.

When we saw the Capital Building…I rejoiced in my heart. We got closer and closer and started seeing some buses… None were ours. Finally, about ready to drop, I called our coordinator. She explained that we were to go to the complete other side of the Capital…my heart sunk.

I must persist, it seemed like a mile — and then I saw the wonderful sight… Our bus. We got on and sat down. Snacks were shared around, nuts, raisins, and somebody had pepperoni and crackers. We rejoiced!

So, this was the day that was. I am so happy I went. It was a taste of heaven. no division, no strife. I hope God enjoyed it too, and answers our many prayers. Love ya 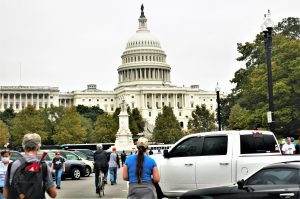