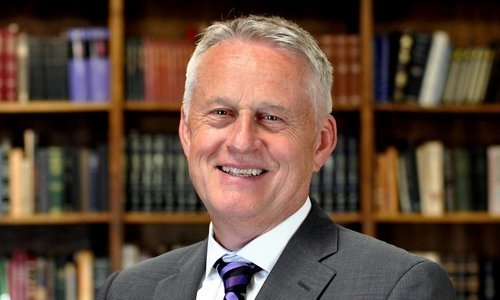 A pastor and missionary for more than 30 years, Pastor Schaller led the establishment of thriving churches and Bible schools in Finland in 1975 and Hungary in 1990. In April 2005, he was named Presiding Elder and Overseeing Pastor of Greater Grace Church in Baltimore, the home base church for Greater Grace World Outreach.

Pastor Schaller’s deep, thought-provoking messages have made him a much-in-demand speaker at conferences throughout the world. He is a man of the Book and maintains a tremendous schedule of preaching and teaching at Greater Grace Church and at Maryland Bible College and Seminary.

Upon his graduation from Northeast School in 1975, Pastor Schaller led a small team to Helsinki, Finland, and showed determination, creativity, and ability in the development of a ministry that now includes eight churches throughout the country. He also imparted a missionary motive that has moved Finns to labor for Christ in 19 countries around the world. The work in Finland, which grew in the face of obvious opposition, proved pivotal to GGWO’s future endeavors in Eastern Europe.

After nearly a decade serving as the Missions Director for GGWO in Massachusetts and Maryland, Pastor Schaller answered God’s call to plant a new work in Budapest, Hungary, a country that sprung open with the fall of communist governments throughout Eastern Europe. He spent 13 years as the pastor in Budapest before returning to Baltimore in 2003. He and his wife, Lisa, reside in Baltimore and are the parents of two daughters, Amy and Bethany, and two sons, Justin and Kyle. They also have seven grandchildren.