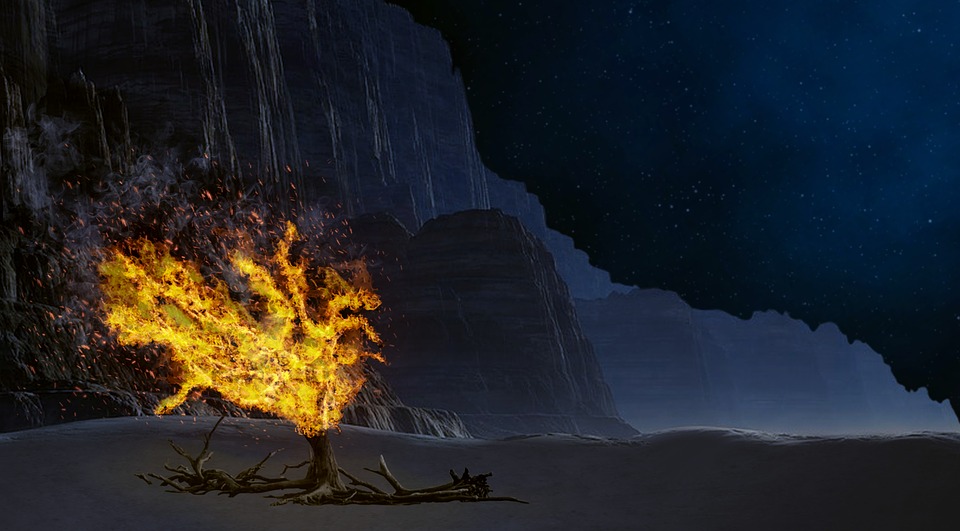 The word “commandment” is a word that sounds so forceful, so prohibitive, and so hard to us. We imagine a policeman shouting, “STOP!” when we consider it. So it may come as something of a surprise to hear John write these words in one of his letters: “For this is the love of God, that we keep his commandments. And His commandments are not burdensome” (1 John 5:3 English Standard Version).

Not burdensome? The King James Version uses the words “not grievous” in its translation. To most of us, rules and regulations are things we chafe at. They are a burden and a grief to us. We see a sign, “Keep Off the Grass” and we feel something in us that makes us want to take a great giant step forward.

This is part of being human. Paul wrote carefully and honestly about it in Romans 7. There he related the struggle that he perceived going on inside of him. “For I know that nothing good dwells in me, that is, in my flesh. For I have the desire to do what is right, but not the ability to carry it out” (Romans 7:18).

The last part of the verse is the significant one for us.

The reason the commandments of God seem like such burdens to us is because they are impossible to carry out – in our flesh. Naturally, we revel in the sense of accomplishment. We – most of us anyway – like to set goals, get things done, and reward ourselves for completing the tasks on our to-do lists. But our natural gifts and talents only get us so far when it comes to living for God.

The Ten Commandments come to us first in Exodus 20 and are repeated in Deuteronomy 5. Many of us have learned them by heart. They’ve been posted all around in churches, classrooms, and monuments. And they all begin with Commandment No. 1 — “Thou shalt have no gods before Me. …”

Exodus 20 opens this way: “And God spoke all these words, saying, I am the Lord your God, who brought you out of the land of Egypt, out of the house of slavery” (Exodus 20:1-2).

The Lord spoke and declared Himself. I think it’s important that we first focus on Him. Before He got to saying, “thou shalt,” God asked the people to consider who He is and established His relationship to them. He announced Himself as present and personal – “I AM the LORD your God.” He, in effect, said to Israel, “I AM yours just as you are Mine.”

After telling the people about Himself, He then reminded them of what He did. He rescued them from Egypt. He broke their yoke of slavery, a bondage that had lasted more than 400 years.

When we begin addressing the commandments with the understanding of who He is and what He’s done for us, then our perception of them and how to follow them becomes very different.

Think of how these commandments came to Israel. God heard the groans of the people as they slaved away under the oppression of a Pharaoh who “knew not” Joseph, the man of Israel who saved the empire from a destructive famine.

So the Lord raised up Moses, but not right away. He was a miracle child rescued from death in the Nile River by Pharaoh’s daughter. Moses then grew up in the household of Egypt’s ruling family though he knew he was an Israelite.

One day, Moses took vengeance into his own hands as he witnessed a slave master beating one the Israelites, one of Moses’ kin. Moses killed the slave master and buried him in the sand. He went from miracle baby to murderous man and was driven from Egypt to the wilderness of Midian.

The Lord gave Moses a glimpse of His glory. Moses came to know God more and more, and He saw God do more and more. Click To Tweet

Now Moses was a hidden man. He took a wife and had a son, one he named Gershom, meaning stranger. He felt like stranger in a strange land as he tended his father-in-law’s herds.

And then Moses saw the Light. A bush was on fire, but it wasn’t turning to ashes. He came close to the bush and there God spoke to him. He was now on holy ground hearing from the Holy God. The Lord revealed His Name – I AM THAT I AM – and gave the miracle-murderer-stranger a mission.

Moses balked. He had forgotten how to talk – at least that’s what he claimed. Probably, he was terrified at what God was calling him to do. He did move forward. Moses returned to Egypt, faced Pharaoh, and led Israel out.

God spoke to His messenger as a friend speaks to a friend. The Lord gave Moses a glimpse of His glory. Moses came to know God more and more, and He saw God do more and more.

This is why this man was able to live as He did. Israel proved to be a collection of whiners and stubborn people. They often forgot about who God is and what He had done for them. Even Moses stepped out of order, striking a rock to bring water for the people when he was told to speak to it. He paid the price and did not get to lead Israel into the Land of Promise.

He did get there, many, many years later, however. On the Mount of Transfiguration, Moses was with Elijah and Jesus outside Jerusalem in Matthew 17. He was called by grace, he lived in grace, and he was brought to the Land by grace in God’s time.

When we know the Lord and consider what He has done for us, then when can ask the Holy Spirit to shed His love abroad in our hearts and give us the power to serve Him. The commandments were given from Him to bless us, not to defeat us.

Really, the commandments are the branches and bones that come with a relationship that bears fruit. In a right relationship, there is care. God speaks to us and tells us that He cares through these things. He also puts in us the very will to do of His good pleasure (see Philippians 2:13).

Let’s think about Him and what He’s done. He will supply us with the capacity to do what He has called us to do.