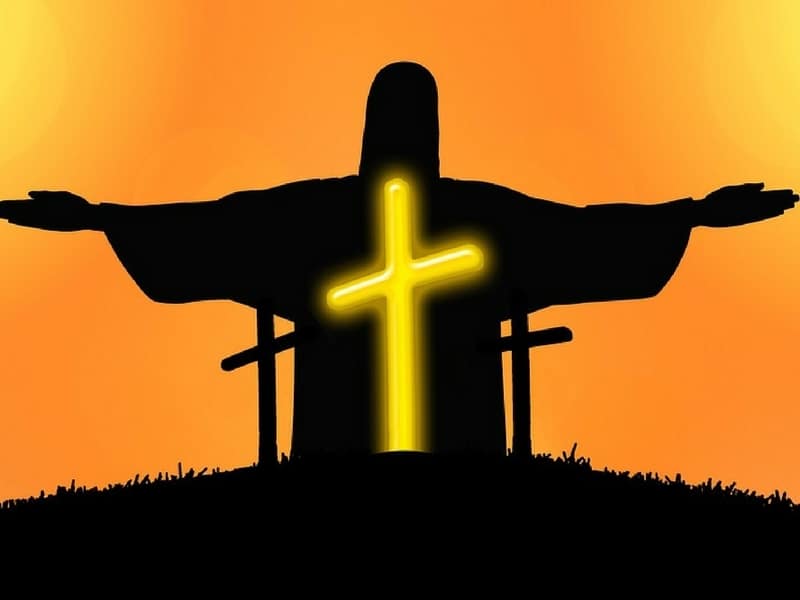 “He Who knew no sin became sin for us, that we might be made the Righteousness of God in Christ.”

As time progresses in the aftermath of “Holy Week”, in particular Good Friday and Easter Sunday, it is easy for non-Christians and Christians alike to lose a sense of the poignant reality of what the Lord Jesus Christ did for us, and most importantly as us, on the Cross.  “He Who knew no sin became sin for us, that we might be made the Righteousness of God in Christ” (II Corinthians 5:21).  This is a piercing truth, a glorious promise, and how can we avoid becoming familiar with it?   Loving it but not being changed by it?

Let’s consider what He left to come to Earth:  Absolute Glory;  unbroken, unhindered fellowship with the Father;  total absence of sin, pain, death, sorrow, guilt, fear, rejection, hatred … .  But it was decided in Eternity past that because the Father’s Holiness could only be satisfied and His Righteousness and Justice appeased by a Perfect Sacrifice, only a perfect, sinless Man – Who was at the same time God Himself – could be offered up as that Sacrifice to reconcile man to God. The Son of God said “Yes, I’ll go.  Yes, I’ll be that Sacrificial Lamb.  Yes, I’ll become all that they are so that they can be and enjoy all that I AM – forever!”  So Mercy and Truth met together and decreed that Mercy would preempt judgment against us and ever rejoice over it! ( James 2:13).  Then “Righteousness and Peace kissed each other”, making a covenant, in order that mankind could be reconciled to God (Psalm 85:10).  It was time for the Lamb Who had been slain from the foundation of the world to come into the world and be made manifest, that He might destroy the works of the god of this world (I John 3:8;  II Cor.4:4).

By His choice, He became absolutely guilty of all of the sins of all of humanity.

Imagine:   the sinless Son of God taking upon and into His own body every single one of all of the sins and iniquities of every single person ever created!  And not only did He do this but He also took upon Himself all of the guilt and shame of everyone of us, that we might not have to live with that heavy, intolerable burden.  But not only that … Imagine:  He was touched with the feeling of every single one of ALL of our infirmities and afflictions;  He experienced the pain of every single illness, disease, weakness – spiritual, mental, emotional, physical – of every single human being who ever lived on earth.  But He never once  complained or accused.  He never defended or tried to vindicate Himself.  The very Son of God knew that He was indeed, by choice, guilty of all of these things, of ALL sin and iniquity.  In fact, He became all of this so that we could live in this “great exchange” even while here on earth.  The Lord Jesus took fear, rejection, lust,envy, worry, anxiety, hatred, rebellion, lying, cheating …. upon His own body, becoming sin “personified”, so that we might be made the Righteousness of God in Christ!  (II Cor.5:21)  Now, through faith in Him and in what He did for and as us, we can be absolutely  free of all of these – of ALL sin – by believing and receiving this great exchange!  Now we can live in Love instead of fear or hatred, in unconditional acceptance of God instead of rejection of men, joy unspeakable and full of glory instead of in moods and depression, with honest hearts instead of in a lying habit.  It is indeed the “exchanged life” that the Apostle Paul so delighted in and so clearly wrote about:  “I am crucified with Christ.  Nevertheless, I live;  yet not I but Christ;  and the life that I now live, I live by the faith of the Son of God, Who loved me and gave Himself for me.”  (Galatians 2:20) Then in Philippians 1:21,  “For to me, to live is Christ …”.

King David so trusted the Character of God to forgive and cleanse every one of his sins [ Note:  this was well before the Cross of Jesus Christ] that he simply went before Him and poured out to Him in utter simplicity and transparency every one of his sins he could remember.  “I acknowledged my sin to You, and my iniquity I did not hide.  I said, I will confess my transgressions to the Lord [ continually unfolding the past till all is told] – then You instantly forgave the guilt and iniquity of my sin.” (Psalm 32:5)  Elsewhere in Psalms, David is recorded as saying “I have kept myself free from my sin and my guilt.” (Psalm 18:23)  Even in the Old Testament he knew how to live honestly, transparently before God, how to be cleansed of all righteousness, and thus how to live in true holiness “away from sin and guilt” (Psalm 77:13).  Let us be available to do likewise, reckoning on His payment for and His forgiveness of ALL of our sins – past, present, and future – with the result that we are FREE INDEED to enjoy the unspeakable gift of an exchanged life with the One Who IS Life (John 14:6)