Friends in Deed and in Truth 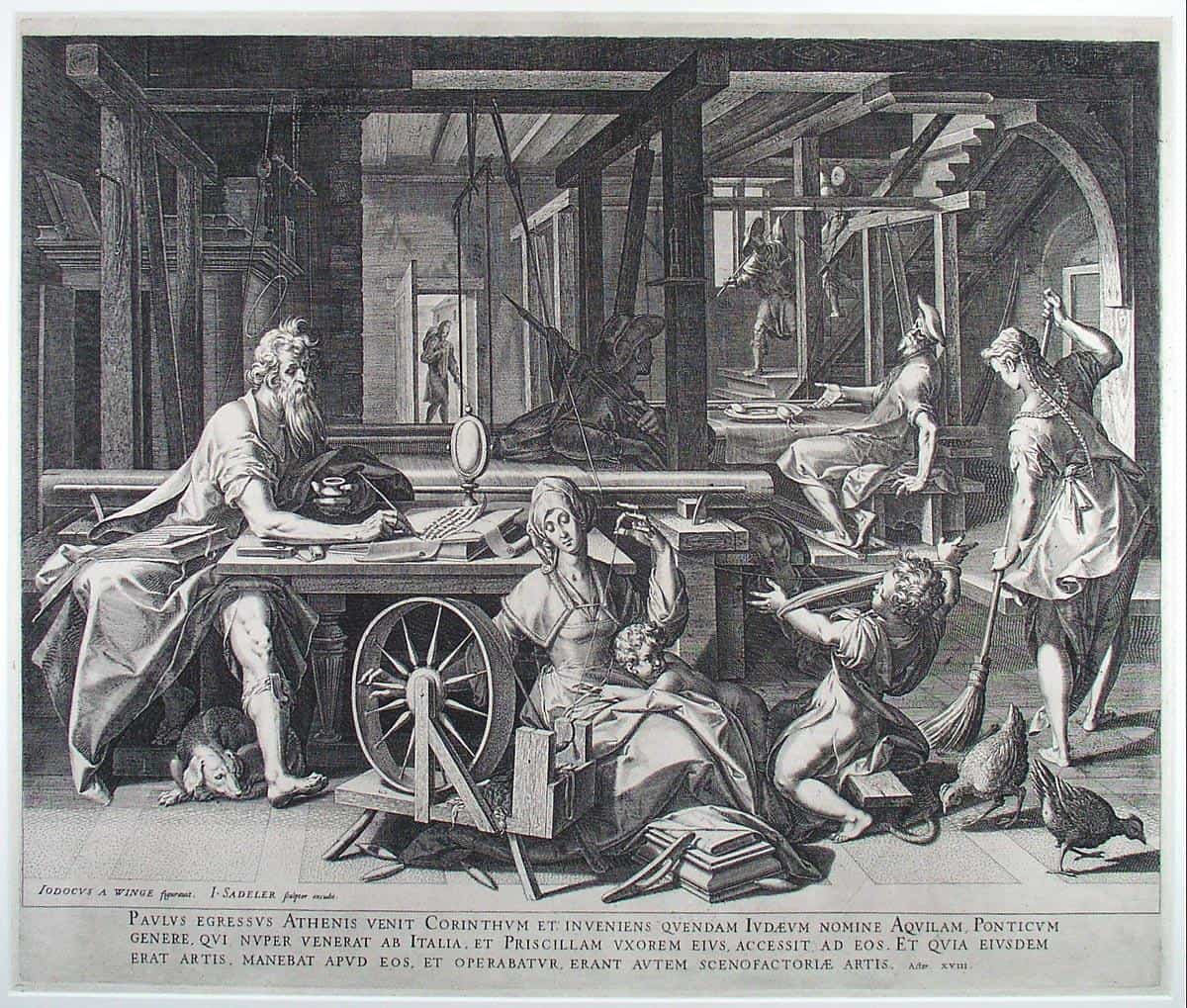 Paul found friends and together they changed cities.

He met Aquila and Priscilla in Corinth. They were a husband and wife on the move, driven from their home in Rome for being Jews. An edict issued by Emperor Claudius targeted this people group, though little is known of the reason behind it. This Caesar, it seems, just didn’t want Jews in the capital city. Government taking aim at the chosen ones of Yahweh – it’s a story that has been repeated throughout history.

Aquila and Priscilla were, like Paul, tentmakers, and so they became a team in trade and in truth.

I think this may have been a time when Paul really needed some friends. Mobs hounded him and ran him out of Thessalonica and Berea. He then headed to Athens, the sophisticated academic hub of the Roman world.

It was a city full of thinkers, talkers, idols, and ideas. Those in the town dedicated their hours to “telling and hearing some new thing,” according to Luke, the writer of Acts. It was a place where Paul could mingle for a season, and it was also a place where the radical message of the Gospel could be circulated among the worldly wise.

The religious and humanistic atmosphere in Athens stirred Paul. He spoke the message of Christ in the synagogue and in the market. These new words got the attention of the town philosophers who brought him to Mars Hill, their meeting place for debate and discussion. They had to hear this “babbler” for themselves.

Paul stood before this renowned assembly and proceeded to address their ways of worship and the altar of the “unknown God.” His message gained a hearing for a time; that is, until he spoke of the resurrected Jesus. This was too much for these learned ones. They mocked and dismissed him. It wasn’t a total loss, however, as some “joined him and believed.”

Still, I believe Paul left Athens in heaviness. So much artificial intelligence, so much rotten reasoning plagued this great and ancient metropolis. I think this missionary man wept as the psalmist did:  “My eyes shed streams of tears, because people do not keep your law” (Psalm 119:136).

Corinth, situated just west of Athens, carried a Vegas-like reputation as place of indulgence. History indicates that it was a city full of pagan shrines with their attendant cult prostitutes. To me, it seems that Corinth might have been a lot like Baltimore, a gritty, edgy waterfront town not far from the center point of world power. Our city today plods along overshadowed by likes of Washington, New York, and Philadelphia.

It was in Corinth that Paul would settle for more than a year and a half. Aquila and Priscilla were a big reason why. Their like, precious faith encouraged Paul.

A preacher and pastor needs like-minded and wholly devoted sidekicks, people who can lift his spirits when doubt knocks at the door of the heart. These are friends in deed and in truth. They bring cups of cold water. They deliver faithful wounds of exhortation and correction. They know how to tell a good joke.

None can go the way of the Cross on his own – not even the Son of God. Jesus chose the Twelve, and from among them He drew Peter, John, and James even closer to Himself. Their friendship was so welcomed by the Lord during His days on earth. Jesus, God in the flesh, was and is absolutely human and enjoyed His interactions with those who followed Him.

With Priscilla and Aquila, Paul could be real. He could be himself, he could let his hair down – or cut it all off as he did in relation to a Jewish vow in Acts 18.

Aquila, Priscilla, and Paul possessed oneness and companionship in the work of the ministry. Click To Tweet

After their time in Corinth, they traveled as team to Cenchreae and on to Ephesus, where the couple opened their home for church meetings (see 1 Corinthians 16:19). Paul called them his “helpers in Christ Jesus.” The Greek word for “helpers” is synergos, from which we get the English “synergy.” This means that Aquila, Priscilla, and Paul possessed oneness and companionship in the work of the ministry.

These two had discernment and tact as we see in their encounter with Apollos, a capable speaker and student of the Bible. This man, talented and wise, learned the “way of God more accurately” from Priscilla and Aquila. He soon became a valuable asset as a traveling speaker/teacher in the work of Christ.

The last mention of this couple comes at the close of Paul’s last known letter – 2 Timothy. “Salute Prisca and Aquila …” he writes (see 2 Timothy 4:19). “Lift a sword to these two” was what Paul was really saying here in using the Greek aspazomai in this sentence. With his execution coming son, Paul sought to honor these fellow warriors in the faith.

A Few Born for Mission

In Corinth, Paul got a vision one night from God in which he was told these things: “Do not fear. Go on speaking. Do not be silent. I am one with you. None will harm you, for I have many in this city who are my people” (see Acts 18:9-10).

This vision and message was certainly of great comfort and encouragement to Paul. With faithful friends close by him, I believe these words took on more life and meaning to him. Yes, there were many in Corinth and many in other places who heard and believed the Gospel as spoken by Paul.

But how many Priscillas and Aquilas were there in Paul’s life? Only a few I think.  And, oh what a difference they must have made in this great saint’s ministry.

These people were born for mission and adversity. They were members in particular, soldiers standing fast and lifting up the arms of their leader.

May God add to our lives true and lasting friendships that help us follow the narrow way that leads unto life eternal.

For more about Paul and his time in Corinth, check out “Words That Keep Us in Oneness and Joy,” a message preached by Thomas Schaller, Pastor of Greater Grace Church of Baltimore.