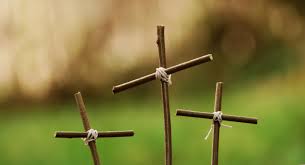 “Father, forgive them, for they know not what they do.”

Jesus spoke these words from the Cross. It was the first sentence He said once He was lifted up, according to Luke 23. His hands and feet were pierced. He had been lashed mercilessly with a scourge. A crown of thick, sharp Judean thorns had been thrust upon His brow.

His friends and followers? All but a few had forsaken Him. This one sold him out, this one said he never knew the Man, others  ran and found their hiding places in the tensions of the moment.

His own people refused Him, despite the gracious words and miraculous things He had done among them. Delivered over to the heathen government, He stood alone and accused.

Defend Himself? He did not. He closed His mouth and turned His cheeks to absorb every cruel blow.

Temple officials laid charge after charge after charge upon Him. The caretakers of God’s House of prayer and worship failed to recognize the presence of the Lord in their midst. Men whose eyes memorized the Scriptures in fastidious detail were blind to Him who was written of upon so many pages in the Law, the Psalms, and the Prophets. Their operations and traditions crowded their hearts to such a degree that there was no space for the Person of their peace.

The Roman hammer fell upon the rusty nails and were driven through His flesh. His spotless, innocent, holy skin was torn, leaving wounds that remain upon Him in His resurrected state.

He hung between Heaven and Earth. He was suspended there in the midst of the great invisible battle scene where the forces of the prince of the power of the air wage their attacks and exercise dominion over the cosmic world system.

He was suspended there in the midst of the great invisible battle scene where the forces of the prince of the power of the air wage their attacks and exercise dominion over the cosmic world system. Click To Tweet

Hell’s minions whipped the mob into madness before Pontius Pilate. “Give us, Barabbas,” they shouted and they got their wish, as a ruthless, terroristic bandit was turned loose.

Jesus went to the Cross, knowing that the power of the devil was connected to death and to the fear of it (see Hebrews 2:15). Death, it seems, could be only be defeated by a death, a death like every other death, a real, human death. But it would also be a death very different from every other death. It would be a natural and a supernatural moment at Calvary. Jesus would die, but only on His terms and in God’s timing.

To go big, to muscle up, to marshal a show of magnificent force was well within the realm of Jesus’ authority as God the Son. He said as much as He was arrested at Gethsemane: “Do you think that I cannot appeal to my Father, and he will at once send me more than twelve legions of angels?” (Matthew 26:53).

This battle had to be won another way. Vengeance belongs to the Lord (Romans 12:19). It is all His to administer.

How did He do it?

“Father, forgive them for they know what they do.”

Christ faced death and the devil and opened the way for mercy to rejoice. The veil, that hung between His presence and us, was torn.

Forgiveness proved to be the best revenge.

Christ’s death – the offering of Himself – absorbed all the wages of sin for all. It was the total satisfaction of the debt owed. It removed each and every claim that the devil could boast about to the Lord; the sway he holds over the sons and daughters of Adam was stifled forever.

For centuries, the serpent reveled in what he had accomplished in Eden. Deceptive words steered the woman from truth. She knew not what she was doing. Death? It was an unknown, even to Satan. None had yet felt its sting. Satan centered his argument to Eve with an appeal to deficit. “What are the things you don’t know?” the serpent hissed. “Is God hiding something? Eat, and find out.”

Eve looked. She reached. She ate. She shared. And so Adam fell and the entire race of man with him and his wife, who became the mother of all living.

Death came and brought sweat and toil, thorns and thistles, the bread of sorrow. Seeds of the fall were sown in the ground and in human hearts and minds. Corruption became rooted in life.

But then Jesus came to the Tree of Calvary.

These words answered the damage done in the Garden. The diabolical sentences of Satan brought death into our picture. Jesus entered the picture and defeated death with His death. There, at Calvary, he broke the flashing arrows, the shield, the sword, and the weapons of war (see Psalm 76:3).

It was a prayer Jesus prayed for all. Mercy could now flow like a river. And it almost did at once, for the next sentence He spoke from the Cross was this promise:  “Today, you shall be with Me in Paradise.”

This promise was directed to one whose crimes put him there that day on the same crucifixion hill with Jesus. This thief belonged on his cross and he knew it. He merely asked the Lord to remember him when He entered His kingdom. And Jesus answered him – new life would be his.

It was also a word of confidence for the Son of Man. Jesus was committed to taking the cup of wrath for the sins of the world. He would finish the work; the Father’s will would be done. He saw the plan of redemption through to its completion. He revenged our disobedience with His full obedience.

“Come down and we will believe,” some jeered at Him there. “Be bold. Prove Yourself. Show us Your power.”

Jesus did just that in staying on the Cross and in saying this: