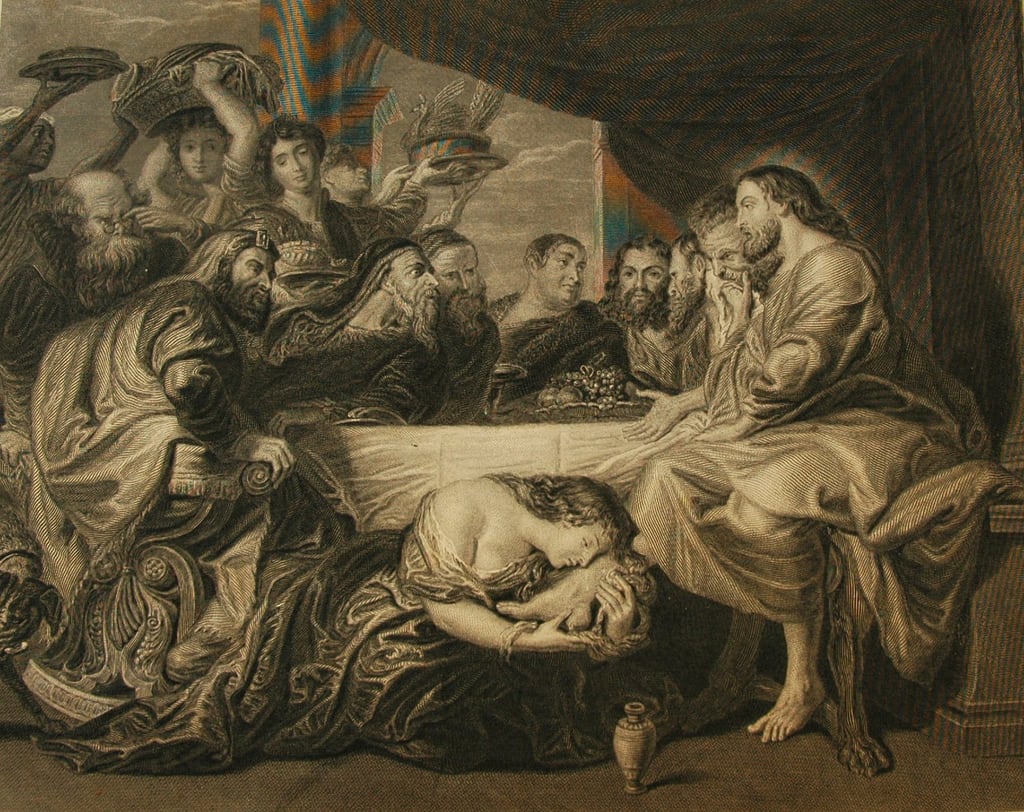 She interrupted a dinner party to thank the Lord, and what a thanksgiving it was.

Her story goes like this. Jesus was invited to eat at the home of one of the region’s leading men. Simon the Pharisee was intrigued by what he heard about the man from Nazareth.

The teaching of Jesus carried authority. The words He spoke were not rehashed sayings stolen from other teachers. He delivered statements that confounded and cut.

“Woe to the rich; woe to the full; woe to the well-respected.” These words stirred even more alarm.

“Love your enemies, do good to them who hate you; bless them that curse you; and pray for them who despitefully use you.”  Who could be expected to follow such instructions?

And, yet, Jesus spoke them again and again. Every town and region was hearing this Gospel message.

More than that, the words of Jesus worked wonders. A Roman centurion came to Him with a desperate request for his sick servant: “Only speak a word, and my servant will be healed.” Then Jesus said to the centurion, “Go your way; and as you have believed, so let it be done for you.” And the servant was healed that same hour (see Matthew 8:5-13).

And there’s the story of the dead boy in Nain, the only son of a widow. Jesus halted the funeral procession and said, “Young man, I say unto you, Arise.” The boy sat up alive and began to speak. His mother and the town glorified the Lord and proclaimed that God had visited His people.

All of these things piqued Simon’s interest in Jesus.  He was more than curious – he was suspicious.

Simon, it seems, sought to interrogate Jesus. He had to get more information, and so the Pharisee treated Jesus more like a subject for observation than as a guest at his table.

Customary hospitalities went undone. Jesus got no water to wash His desert-worn feet; He was not greeted with a kiss, nor was He given any oil for His sun-beaten brow.

All was proceeding as Simon planned until she showed up.

A woman from the streets of the city fell at the feet of Jesus. Perhaps, she was a prostitute. The Scriptures don’t give us the particulars about her life – she is simply labeled a “sinner.” With her, she carried a box of expensive ointment. This fragrant substance may have been one of the tools of her trade.

The pouring of the ointment may have been this woman’s way of emptying herself of what she used to be. Click To Tweet

Her tears flowed down upon the dusty feet of Jesus. She wiped those feet with her hair and began to kiss them. Lastly, she anointed those feet from the alabaster box of ointment. The pouring of the ointment may have been this woman’s way of emptying herself of what she used to be.

To Simon, the scene was appalling. He now viewed Jesus as no prophet at all, for how could a man of God allow such a woman to touch Him.

The room was thick with tension. And, Jesus stirred the pot even further as He addressed Simon with a parable about two debtors.  The creditor forgave the debts of both. However, one had owed 500 pence while the other owed just 50 pence.

“Tell me therefore, which debtor will love him more?” Jesus asked Simon.

“I suppose he who was forgiven most,” Simon answered.

At the Feet of Jesus

The Pharisee was right, but at the same time so wrong. His heart of pride blinded him to his need for forgiveness. Love for Jesus? There was none in Simon at this point.

This woman, on the other hand, had come to Jesus as one freed from her heaviness and weakness. Her faith in Him saved her. This moment was an outpouring of her joy. She had sinned much and now stood forgiven.

Jesus loved her; she heard this love in His words. Now, she loved Him back, extravagantly, openly, totally.

This is what it means to be saved by grace through faith in Christ. This woman, therefore, could “Go in peace” just as Jesus told her.

And so the story ends in Luke 7.

Simon, what of him? Did this encounter fix his heart? Was he changed by the words of the Master?

We can only hope so, for his way to peace and forgiveness could only be found at the feet of Jesus.

Only in Christ are we made clean and whole.